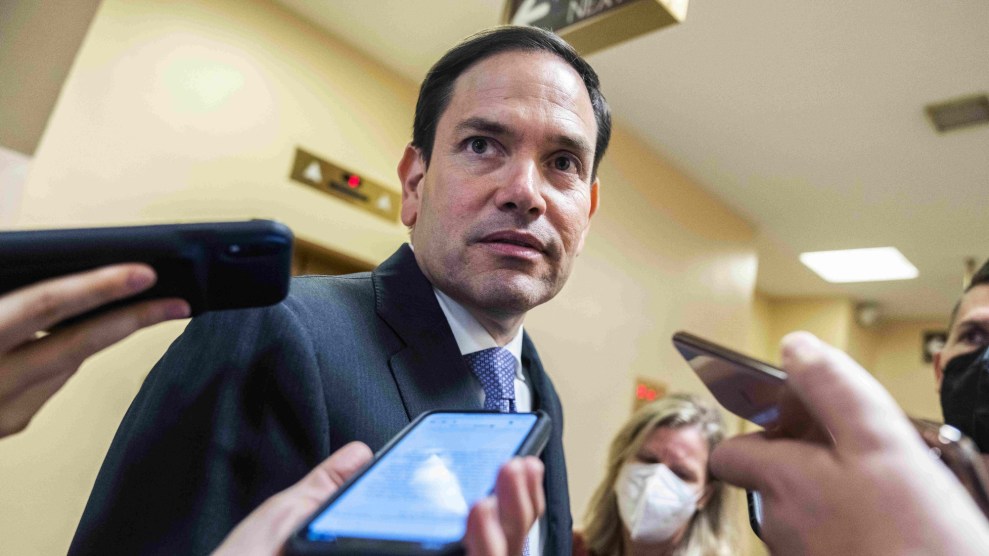 Once again, there is a series of tricky questions headed for Sen. Marco Rubio (R-Fla.) about his relationship with former Republican Rep. David Rivera.

On Monday, Rivera, a “longtime pal” of Rubio, was arrested on charges of illegally lobbying for Venezuela. Rivera faces eight federal charges that include conspiracy to commit money laundering, failure to register as a foreign agent, and conspiracy to commit an offense against the United States. Documents from the case reveal that an unnamed US senator met with Rivera in 2017 to discuss a possible deal to normalize relations between the United States and the oil-rich South American country. Rubio is not accused of any wrongdoing. But Politico reported Tuesday that a spokesperson for Rubio confirmed that he was the unnamed legislator—they added Rubio did not know Rivera was working on behalf of Nicolás Maduro.

Rubio has been a vocal critic of Maduro. He played an instrumental role in the United States applying strict sanctions against the Venezuelan government, with the US government only promising to lift them if they held free and fair elections.

According to NPR, Rivera allegedly signed a secret $50 million contract with Venezuela’s state-run oil company in early 2017, promising to lobby US politicians. This includes resolving a legal dispute between an unnamed oil company and Venezuela as well as preventing the US from imposing any more sanctions against the Venezuelan president and his regime.

According to the indictment, Rivera told the unnamed senator that Venezuela’s current president, Maduro, had been convinced to hold free and fair elections. The next day, Rivera sent a message in Spanish to an encrypted chat group saying that Rubio will tell then-President Donald Trump during a 9 a.m. meeting that “he has a possibility in his hands to solve the crisis in Venezuela.” On July 11, according to the indictment, Rivera allegedly sent text messages to Rubio, including one that read: “Remember, US should facilitate, not just support, a negotiated situation.” On July 12, they met again in a DC hotel with three other people, including an unnamed Venezuelan politician via phone, to discuss Venezuelan affairs, according to the indictment.

Rivera and Rubio have been friends for decades, dating back to 1992 when they met as volunteers first House campaign of Mario Diaz-Balart. Since then, the pair’s lives have been intertwined politically, personally, and financially. In 1996, Rivera, who was running Bob Dole’s presidential campaign, hired Rubio. A year later, Rivera helped Rubio with his own campaign for West Miami city commissioner. In 2005, they even bought a house together in Tallahassee, a property that eventually was foreclosed on after no one paid the mortgage for five months. They sold the property 10 years later.

“Everyone’s hoping that there’s some sort of linkage to me,” Rubio said in an interview with CBS Miami. “Not a single one of these articles claims that there is and if they did, they’d be lying. The truth of the matter is that has nothing to do with me. But people like to ask it because they think it’d be interesting if there was something there. Nothing to do with me.”