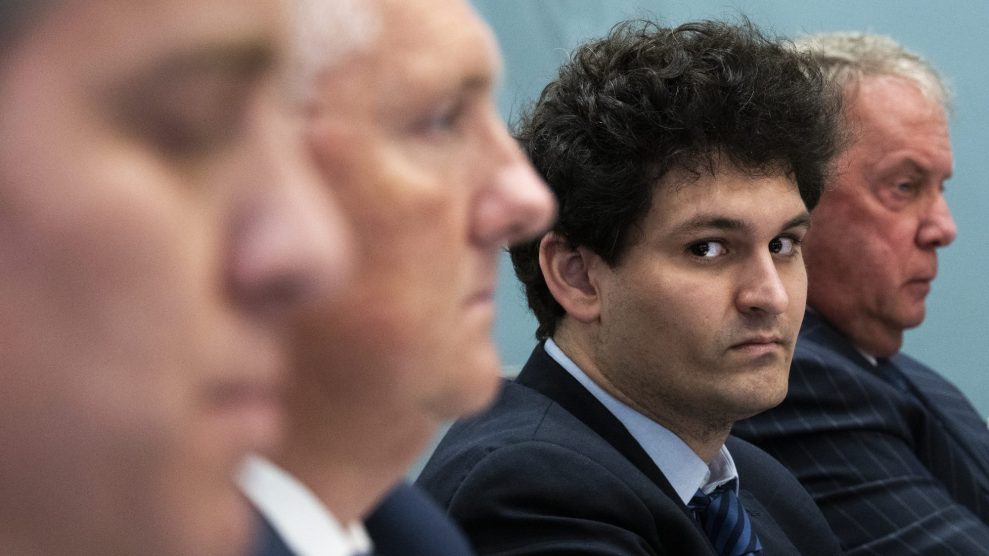 Sam Bankman-Fried was set to testify before Congress on Tuesday, but before he could appear, he was arrested in the Bahamas. Not surprisingly, most of the charges he’s facing involve allegations of fraud related to the collapse of FTX, his crypto-trading platform. But a federal indictment unveiled Tuesday also accuses SBF—a prolific political donor who cultivated relationships with politicians and policymakers—of campaign finance violations.

The precise connection between Bankman-Fried’s own political views and his prodigious political spending isn’t exactly clear. In recent years, he’d built a reputation as a champion of liberal causes, lavishing progressives with donations and promising as much as $1 billion for Democratic campaigns in 2024. But campaign finance records show he openly gave more modest amounts to Republicans, as well. After his company collapsed, Bankman-Fried told reporters, without providing evidence, that he had actually had actually given huge sums to Republicans—though he said he preferred to make those donations through dark money groups that weren’t readily traceable.

The campaign finance charge announced on Tuesday adds to the mystery of where SBF’s interests lay and just who in Washington he was courting. In the indictment, the Justice Department accused him him of hiding his donations by funneling them through other people. While outside groups like super-PACs and dark money organizations have no limits on what an individual can contribute, there are still limits on how much an individual can give to a particular campaign or PAC. The indictment is not very helpful in describing what exactly Bankman-Fried did wrong, but it broadly describes an illegal straw-donor arrangement in which he allegedly evaded contribution limits by routing his political giving through someone else.

Straw-donor schemes are among the most frequently charged campaign finance violations because there is often an obvious paper trail and there is a second party who can testify that the donations were not legitimate. The politicians who receive these donations, however, are rarely prosecuted. For now, it’s unclear who Bankman-Fried enlisted to make the donations and who ultimately ended up with the money.

A separate civil fraud lawsuit filed by the Securities and Exchange Commission on Tuesday accused Bankman-Fried of misusing investor money for a variety of purposes—including to make political donations. But that lawsuit similarly offered no details on who Bankman-Fried was illegally donating to.

What we do know is that Bankman-Fried was a big donor and that his contributions rapidly increased as FTX grew. In the 2020 election cycle, Bankman-Fried was the 47th largest donor, giving $5.5 million. All of that, according to campaign finance watchdog OpenSecrets, went to progressives. In the 2022 cycle, Bankman-Fried was the sixth largest donor, dispersing more than $38 million. This time, $35 million went to progressives and Democrats, with the remainder going to more conservative candidates and organizations, like Sens. Susan Collins (R-Maine) and Richard Burr (R-N.C.). Bankman-Fried took a particular interest in Sen. John Boozman (R-Ark.), donating to his campaign and giving $50,000 to a super-PAC that supported Boozeman.

After FTX collapsed, Bankman-Fried told an interviewer that he donated equally to both parties. He claimed he kept his donations to Republicans secret because of liberal media bias.

“All my Republican donations were dark,” he said.“The reason was not for regulatory reasons, it’s because reporters freak the fuck out if you donate to Republicans. They’re all super-liberal, and I didn’t want to have that fight.”

But Bankman-Fried’s firm, FTX.US, apparently made no effort to hide the fact that other high-level employees gave heavily to Republicans. Employees (including Bankman-Fried) donated $28 million to the liberal Protect Our Future super-PAC. At the same time, Ryan Salame, one of the company’s top executives, donated $15 million to a conservative super-PAC that boosted a slew of GOP House candidates. Salame was actually the 14th largest donor in this past election, dropping more than $20 million, almost all of it to conservative candidates and causes.

We will probably know more details soon. The exact methods that Bankman-Fried used to direct his secret donations—and the candidates who received them—will likely be made public by prosecutors in the coming weeks.