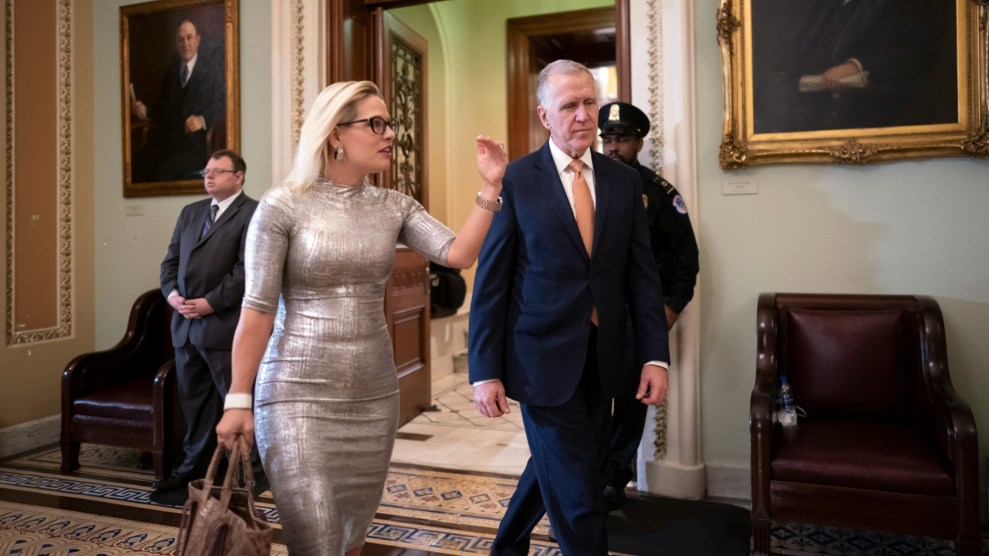 In what was likely her last official press conference on Thursday, outgoing House Speaker Nancy Pelosi put the final nail in the coffin of negotiations over a dead-on-arrival bipartisan immigration deal. “There’s not going to be anything happening in this Congress as we go out,” Pelosi said when asked about the fate of the pandemic-era border closure policy known as Title 42 that is supposed to come to a halt on December 21 per a court order. “I do like talking about immigration, though.” And just like that Pelosi summarized what has been an inescapable truth about legislating on immigration: a whole lot of talking about reforming a broken system that never fully translates into action.

For weeks, there has been speculation about a last-minute, lame-duck session agreement championed by Arizona Sen. Kyrsten Sinema, who just recently left the Democratic Party to be an Independent, and Republican Thom Tillis of North Carolina. Their blueprint provided a path to citizenship for two million recipients of the Deferred Action for Childhood Arrivals (DACA) program, which grants temporary status and protection from deportation to undocumented youth who arrived in the United States as children but is at risk of coming to an end. It would also have extended an exclusionary and harmful Trump-era policy known as Title 42 that uses a public health imperative to deny migrants the right to request asylum at the border, directed more funding towards hiring and boosting the salaries of Border Patrol agents, and created processing centers to expedite both asylum determinations and the deportation of those who don’t meet eligibility criteria. As Sinema told Politico,  “We are working together on definitely the most difficult issue of all of our careers.”

“We are working together on definitely the most difficult issue of all of our careers.”

The measure would require 60 votes to pass, but both Democrats and Republicans disliked certain provisions. Some Democrats based their opposition on the continuation of Title 42 and the potential to expand the use of detention centers, while Republicans and anti-immigrant groups relied on the misleading “mass amnesty” buzzword to shoot down the deal. The president of the Border Patrol union suggested he would be willing to swallow the pill of granting status to Dreamers in exchange for stricter border security measures. Ultimately, the deal met its death due to “scant Republican support for the plan,” according to CNN reporter Priscilla Alvarez. A congressional aide familiar with the bipartisan talks said Sinema and Tillis have a framework to introduce immigration reform legislation in the next Congress, but it is unlikely that DACA recipients will see any permanent legislative solution to their status, perhaps for years to come, after Republicans retake control of the House.

The rough framework perpetuates the perennial conundrum of trying to gain Republican support for any sort of compromise on immigration “reform” by ramping up border enforcement. “We’re not going to get any traction at all unless we come to an agreement that we must have border security,” Sen. Joe Manchin (D-W. Va.) said recently. The exhausted line of argument goes something like this: Nothing can be achieved without first “securing” the border. But perhaps the most inconvenient truth about immigration is the fact that decades of so-called prevention through deterrence policies and costly efforts to militarize the US-Mexico border have done little to control migration flows—while leading to hundreds of migrant deaths every year.

Lawmakers of both parties seem unable, or unwilling, to admit that this quid pro quo approach is a trap. It keeps immigration forever in the realm of the unsolvable, which in turn only feeds into Republicans’ “border crisis” hysteria and their opportunistic and cruel political stunts, which then push Democrats into a corner. “A cynic might suspect that Republicans, in true post-party fashion, are more interested in complaining about the broken system than taking meaningful steps toward fixing it,” MSNBC’s producer and political contributor Steve Benen wrote. “When we’re talking about immigration,” Melissa Morales, executive director of the Latino-led voter mobilization group Somos Votantes, told me before the November midterms, “what’s frustrating for us was this national narrative from talking heads that the conventional wisdom was that we shouldn’t be talking about immigration at all because it was a losing issue for Democrats.” She described this as a “bad” and “losing strategy.”

“Fear is a great motivator for better or for worse,” she continued, “and Republicans are never going to let immigration go as an election topic.”