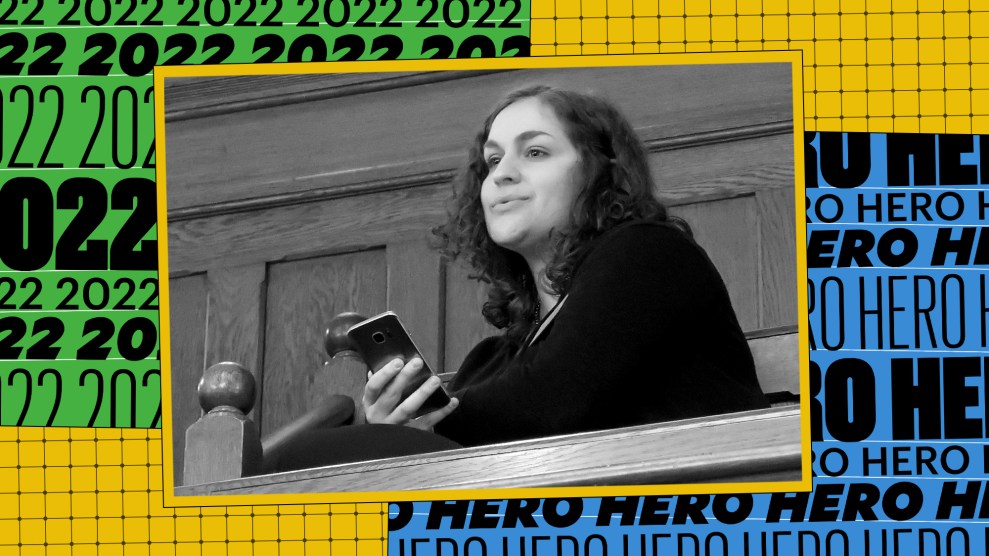 When I asked Rachel Sweet, a political operative from flyover country, what motivated her to pursue a career of fighting for reproductive rights, she couldn’t pinpoint a specific moment or life experience. She grew up in a politically engaged family that often talked about liberal values. She interned at Planned Parenthood in early adulthood and once organized a protest movement that sought to end the slut-shaming of sexual assault survivors. As a thirty-one-year-old woman, she spent her entire life with the right to choose. So why abortion?

“I don’t have a good story,” Sweet says. “I have never been pregnant. I’ve never had an abortion. I just know lots of people who have had abortions, and I love and care about them.”

She also knows how to win. In 2022, she defeated two anti-abortion ballot measures in traditionally red states—first in her role as the campaign manager of Kansans for Constitutional Freedom, the group credited with successfully toppling the referendum that appeared before Kansas’s primary election ballot; next in her position as campaign manager for Protect Kentucky Access, where she shut down a similar anti-abortion effort in November.

The Kansas ballot measure was the earliest direct litmus test of the public’s response to the US Supreme Court’s Dobbs v. Jackson Women’s Health Organization decision, which ended a person’s constitutional right to terminate a pregnancy sanctioned by Roe v. Wade, and shifted the power of regulating the medical procedure to individual states.

As pro-choice Americans felt powerless in the face of five Supreme Court justices who signed their names to the June majority opinion—four of whom were appointed by Presidents who initially lost the popular vote—Sweet leveraged their despair into fundraising dollars, which turned into ambitious canvassing efforts, which then turned into a victory in Kansas, and into a flicker of optimism all over the country.

“One of the things that I’ve heard most in the Kansas campaign was that the victory gave a lot of people hope about what was possible post-Roe,” she says.

The victory also led to another job for Sweet over 600 miles away in Louisville, Kentucky, where yet another anti-abortion ballot measure was to be decided less than 100 days after the Kansas vote.

As she puts it, “Out of the frying pan, into the fire.”

Kansas was an unlikely place for a resounding affirmation of the right to an abortion. The state is home to some of the most intense battles over reproductive rights in American history. During the summer of 1991, dubbed the “Summer of Mercy,” anti-abortion advocates flocked there to protest reproductive rights, and some 2,600 protesters were arrested. Later, in 2009, Dr. George Tiller, a physician who performed abortions in Wichita, was shot and killed by an anti-abortion extremist during another particularly fraught period of anti-abortion discourse. Six years later, Kansas became the first state to ban abortion done through dilation-and-evacuation, a method that is the standard of care after the first trimester, though the ban was later overturned by the state supreme court in 2021.

In 2019, the state supreme court heard a related case on abortion, ruling that the Kansas constitution provides women the right to make decisions about their bodies, including whether or not to continue their pregnancies. Once again, conservative Kansas lawmakers made the state a battleground for abortion rights, by proposing a constitutional amendment in 2022 that would effectively negate the court’s decision by explicitly amending the constitution to assert that nothing in the document guaranteed abortion rights.

To that end, the premise of the ballot referendum Sweet was fighting against and voters were considering was fairly straightforward. “Do you want to make it easier for the state legislature to enact stricter abortion bans by stating there is no explicit right to abortion in the Kansas constitution?”

But the wording of the measure as it appeared on the August ballot was described by nonpartisan political experts as confusing. “An average voter could reasonably think that this amendment will eliminate state funding of abortion to Kansas,” Wichita State University political science professor Neal Allen told Mother Jones at the time, “but there is no state funding for abortion in Kansas.”

Here’s what voters had to consider:

Because Kansans value both women and children, the constitution of the state of Kansas does not require government funding of abortion and does not create or secure a right to abortion. To the extent permitted by the Constitution of the United States, the people, through their elected state representatives and state senators, may pass laws regarding abortion, including, but not limited to, laws that account for circumstances of pregnancy resulting from rape or incest, or circumstances of necessity to save the life of the mother.

The reference to exceptions to abortion rules for rape, incest, and interventions to save the life of a mother was also misleading. “Even though those exceptions are mentioned in the amendment text, nothing about the amendment creates them,” Allen said. In other words, the state legislature could have passed a total abortion ban, without any exception for rape or incest, if the referendum had passed.

Worse than the misleading language of the ballot measure, though, was its timing. Republican state legislators in Kansas scheduled their anti-abortion referendum for the August primary election, when turnout historically has been low, rather than the November general election. In doing so, they seemed to be banking on fewer but highly-motivated voters showing up.

State Democrats and moderate Republicans fought to move the referendum to the November general election. “If you really want to let the voters of Kansas make this decision, and let their voices be heard, why don’t we do this at a time when more people vote?” Sweet asked. “That was an argument being made by those who were trying to make the bad situation better. And it was flatly rejected by conservatives in the Kansas legislature.”

But in retrospect, the August timing gave reproductive rights advocates around the country a place to channel their outrage. Donations from all over the country poured into Kansans for Reproductive Freedom—a bipartisan consortium of reproductive rights advocates and organizations founded to defeat the ballot measure. As the campaign manager of the group, Sweet was responsible for managing the budget, raising money, meeting with community members to gain their support, and overseeing overall strategy.

One of her canvassers was a guy named Ted, who volunteered to knock on doors in rural Kansas on a 100-degree day. In a combination hair-salon and pilates-studio that the group had borrowed for organizing efforts, which mostly were carried out by women—Ted stood out as a rugged man in cargo shorts and a baseball cap. Sweet approached him and asked why he wanted to fight for reproductive rights, as someone who presumably had never had an abortion himself, nor would ever need one.

He explained that he loves his three young daughters, and one day one of them might require abortion care. “It is not enough for me to say that I am an ally and that I will protect them,” he told Sweet. “I have to actually do something about it.”

Together, it was 4,014 volunteers like Ted, organized by people like Sweet, who helped procure record turnout in August. While previous Kansas primaries have drawn 20 percent to 25 percent of voters, more than 46 percent of the state’s voters cast ballots in the 2022 primary, delivering an emphatic 59-41 win to Sweet’s team. When the results came in, they celebrated with some champagne.

Republicans “thought it would be far easier for them” if the measure appeared on the primary ballot, says Sweet.

Instead, the decision backfired in more ways than one. Not only did the August primary give abortion-rights supporters across the country an early indication that this could be a winning issue in November, it also meant that Sweet was not going to be mired in work before the midterm elections. One of the most effective advocates for the right to an abortion in that region was free to move to Kentucky where she could direct efforts against its anti-abortion state amendment in November.

On August 15, just two weeks after the Kansas primary, Sweet started her new job as the campaign manager of Protect Kentucky Access, another single-issue organization founded to protect abortion rights as the abortion landscape across the country began to shift. The group’s efforts became even more important after state Republicans introduced an anti-abortion ballot measure that sought to affirm there was no right to abortion in the Kentucky constitution.

“To protect human life, nothing in this Constitution shall be construed to secure or protect a right to abortion or require the funding of abortion,” the proposed amendment read.

The goals of the conservative lawmakers were similar in both states, but the abortion landscape in Kentucky was different from the one in Kansas. Before the amendment vote, abortion was already legal in Kansas through 21 weeks gestation, a right the state supreme court cemented in 2019 and 2021. The failure of this amendment didn’t change that dynamic; it merely reinforced existing abortion rights.

In Kentucky, however, the Dobbs decision spurred a trigger law banning abortion in almost all cases, including rape and incest, with exceptions only to save the life of a mother or prevent debilitating injury. Once again, Sweet’s advocacy and getting-out-the-vote efforts were successful. Kentucky voters rejected by a 52-48 margin the attempt to amend the state constitution to explicitly state there is no right to abortion. Still, the trigger ban is in effect for now, as the Kentucky supreme court considers whether to pause it while the challenges to it are litigated.

But even if the trigger ban is ultimately upheld in the court system, Sweet says, the work to protect abortion in Kentucky will still have been worthwhile. “It will always be on the books that Kentuckians voted to protect the right to abortion,” she says. “If the court ignores that and if the politicians ignore that, so be it. But Kentuckians made their voices heard.”

After all, the fight for reproductive rights was never going to end on November 8. “The anti-choice movement took 50 years to overturn Roe vs. Wade,” she says. “I don’t think it is going to take 50 years for us to restore access to abortion in large swaths of this country, but it is going to take more than one or two cycles.”