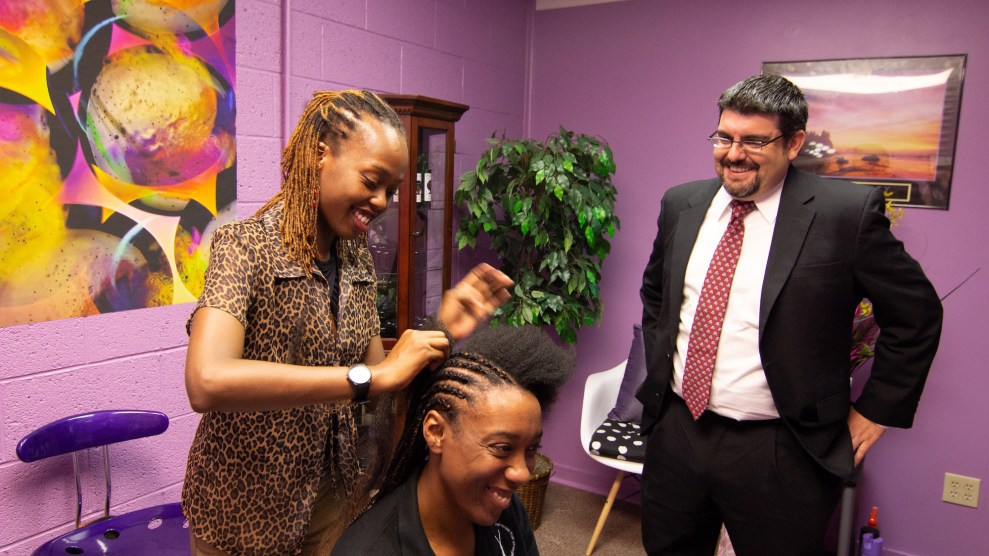 This content was written by Randi Druzin and paid for by The Kauffman Foundation; it is not written by and does not necessarily reflect the views of Mother Jones’ editorial staff. See our advertising guidelines to learn more.

Christine McLean left her home in Ivory Coast and headed to the United States in 1998, determined to start a new life in “the land of opportunity.” She supported herself by braiding hair in Florida and Missouri. She then moved to Arkansas and opened her own shop. That’s when her problems started.

The state Department of Health fined her for running her business without a cosmetology license. To get one, she would have had to spend as much as $20,000 for 1,500 hours of training that was unrelated to hair braiding. She explained this to government officials, but her words fell flat. The fines piled up until she owed almost $2,000.

“Inspectors would come in and say, ‘Your shop is clean, but where is your license?’ This would happen every three months,” McLean recalls. Inspectors once visited her shop and left a fine while she was away, she says. McLean’s livelihood was in jeopardy. “It was very stressful.”

Her experience is not uncommon. From occupational licensing to reams of red tape, entrepreneurs face many hurdles in trying to fulfill their dreams of starting a business. To unlock their economic potential, policymakers need to reduce obstacles and commit to leveling the playing field between new and established businesses.

An occupational license is a credential that a local, state, or federal government requires for working in a given job. The number of jobs needing a government-issued license has jumped from 10 percent to 30 percent since the 1970s, and the number of licensed professions has grown to include industries that have little to do with public health and safety. Some states require people to have licenses to sell caskets or give guided tours.

To obtain an occupational license, a person must meet a combination of the following requirements: have a set number of years of education or experience; pay an initial licensing fee; pass one or more exams; be deemed “of good moral character” and in good legal standing.

Many otherwise-qualified individuals don’t meet those requirements. For example, most people who work on a construction site don’t need to be licensed contractors. But if one of the roofers or plumbers on the site wanted to start his own business, he’d need a contractor’s license—and state regulators might not take his years of experience into consideration. They might demand that he take classes, which he might not have the time or money to do.

With restrictive licensing requirements stifling business creation and innovation, regulators are urged to introduce less-onerous forms of regulation such as certifications and permits in industries where public health is not at risk.

Aspiring entrepreneurs and their supporters are calling on states to streamline licensing requirements and work with each other to ensure that occupational licenses are transferable or recognized across state lines, just as driver’s licenses are.

They also want regulators to reduce blanket bans and “good character” clauses in licensing requirements because they create barriers to entrepreneurship for people who were once incarcerated. “We represent individuals who have served their time in jail and have turned their lives around,” says Paul Avelar of the Institute for Justice, a national public interest law firm. “They want to become productive members of society but are prevented from doing that. These individuals don’t need government grants to start their careers. They just need regulators to get out of their way.”

In addition to licensing requirements, aspiring entrepreneurs must also contend with what critics call a “spider web of regulations.” The regulatory requirements for starting a business are often unclear, especially when it comes to brick-and-mortar businesses. Individuals often face conflicting information from various regulatory bodies.

“We see that red tape across industries favors established businesses,” says Larry Jacob, vice president of public affairs at the Ewing Marion Kauffman Foundation. “That is especially true when it comes to big businesses because they can afford to hire teams of consultants and attorneys to navigate the system. This approach protects their market share at the expense of new and small business owners. The system disproportionately hurts entrepreneurs who are people of color.”

“The top complaint I get from entrepreneurs is that it’s difficult for them to understand all the requirements and do all the necessary paperwork,” says Brooke Fallon, associate director of activism at the Institute for Justice. “The process is opaque and difficult to navigate. I’ve spoken to entrepreneurs who say they would have chosen a different path if they had known in advance all that was required.”

“Many of the regulations overlap and that can lead to absurd situations,” adds Avelar, who is managing attorney of the Arizona branch of the Institute for Justice. As an example, he cites the case of a person who wanted to start a restaurant. The man couldn’t open for business until the facility had been inspected, but regulators wouldn’t inspect the facility until it was set to open for business.

Getting entangled in the regulatory “spider web” can cause delays, which force business owners to pay for commercial spaces without having revenue or income, and face an uncertain future.

Almost three-quarters of entrepreneurs in the US agree that business regulations are complex and difficult to follow. Sixty-five percent believe it’s too time-consuming for business owners to stay compliant with local, state, and federal regulations.

Governments could take several steps to address the problem. To start, a regulator could create a single list of all requirements to start a business in its jurisdiction and produce a simple guide that walks entrepreneurs through the process.

Coordination across agencies to simplify local, state, and federal procedures, forms, licenses, and permits required to start a business would be a huge help.

The challenges of starting a business are even more daunting for immigrants because of language barriers and a lack of cultural familiarity. And research shows that immigrants are nearly twice as likely as native-born Americans to start a business. Between 1995 and 2012, the share of employer firms started by immigrants grew from 16 percent to 26 percent.

To aspiring entrepreneurs and their supporters, it’s clear that economic development policies need to be overhauled. Every year, state and local governments spend billions of dollars trying to persuade big businesses to set up shop in their jurisdictions, while comparatively few dollars are spent on supporting new local businesses. Not surprisingly, 80 percent of entrepreneurs are convinced the government prioritizes large corporations over small businesses.

“Government officials get so distracted by shiny objects like Amazon they forget how much local commerce is generated by entrepreneurs in the community,” says Fallon. “With local businesses, money tends to stay in the community. These businesses use locally sourced products and hire local workers.”

Officials don’t have to hand out huge grants to help entrepreneurs, says Fallon; they just have to reduce the cost and complication of starting a business.

The experience of McLean, who’d left Ivory Coast for the United States in 1998, proves the merit of that strategy. Rather than close shop under the weight of the fines and leave Little Rock, she fought for her right to run her hair-braiding business without having to spend time and money on unrelated training.

In June 2014, the Institute for Justice filed a federal lawsuit on behalf of McLean and another hair braider, Nivea Earl, challenging Arkansas’ regulations. Before a judge even heard the case, the state passed the Natural Hair Braiding Protection Act—legislation that exempts hair braiders from having to obtain a cosmetology license and instead creates an optional certification program.

Since then, the number of hair-braiding shops in Little Rock has grown fivefold, according to McLean. She says there are now about 50 in the city.

“It was painful,” she says, looking back on her ordeal. “I felt like giving up but I didn’t because I wanted to fight for myself and for other hair braiders in Arkansas. I helped make life better for them and that makes me very proud.” McLean has a message for entrepreneurs who are facing an uphill battle in getting their businesses off the ground: “Don’t give up.”