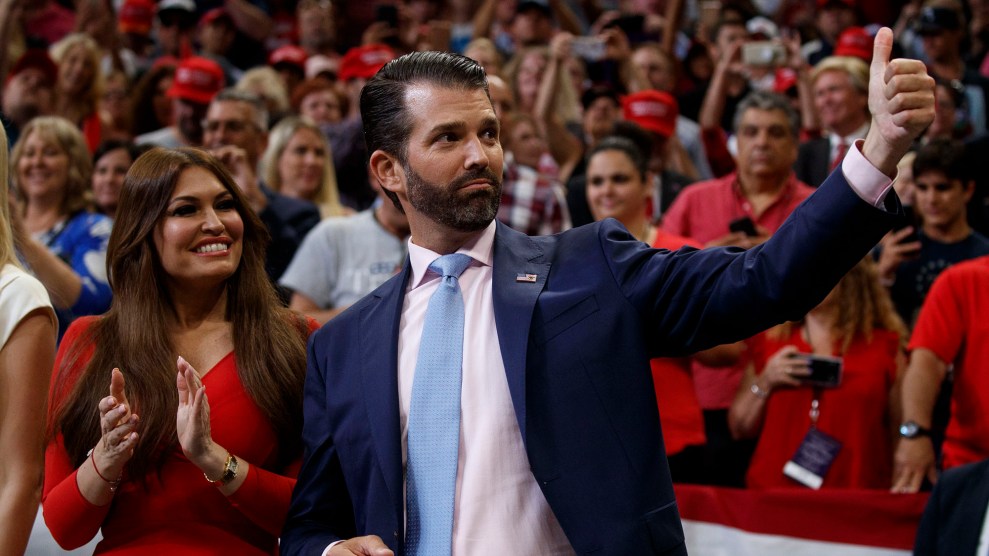 Let me tell you about the very rich. They are different from you and me. For one thing, they apparently have no qualms about taking money from donors and using it instead to pay exorbitant salaries to the significant others of a billionaire’s heirs—all through a secretive third party that allows them to avoid disclosure on Federal Elections Commission reports. That sounds like a ridiculous caricature of elite grifter activity, but according to HuffPost‘s S.V. Date, President Donald Trump’s reelection campaign has been doing exactly that:

Kimberly Guilfoyle, the girlfriend of eldest son Donald Trump Jr., and Lara Trump, wife of middle son Eric Trump, are each receiving $15,000 a month, according to two GOP sources who are informal White House advisers and who spoke on condition of anonymity.

They were unsure when the payments began but say they are being made by campaign manager Bradley Parscale through his company rather than directly by either the campaign or the party in order to avoid public reporting requirements.

“I can pay them however I want to pay them,” Parscale told HuffPost on Friday, but then declined to comment any further.

It’s not super unusual for family members to show up on a campaign payroll—they are, after all, some of the first people to sign on to a campaign, and often find themselves putting in long hours fundraising, campaign-managing, and speaking to the press. (Even less unusual is reimbursing family members for the travel expenses they incur.)

But it’s not as if the Trumps are some scrappy little family that needs the money; these expenses fit into a longstanding pattern of self-enrichment for Trump’s family and his campaign. As my colleague Pema Levy recently noted in a profile of Parscale, the Trump campaign has been structured as much as a money-making scheme for those around him as a political operation. “In Parscale,” she wrote, “Trump may not have hired the best person, but he hired the one most like himself.” Date notes in his story that Trump has been making big bucks off his campaign ever since he launched it—by renting out his own office space to his campaign, and through the prodigious use of his properties for Republican fundraisers. In a sense, Trump is double-billing Republican donors—they’re paying Trump to raise money for Trump, and then he’s skimming even more money off the amount raised to pay other family members.

It’s a good gig if you can get it! Still, on a human level, there is something sad about paying your daughter-in-law $180,000 to say nice things about you.