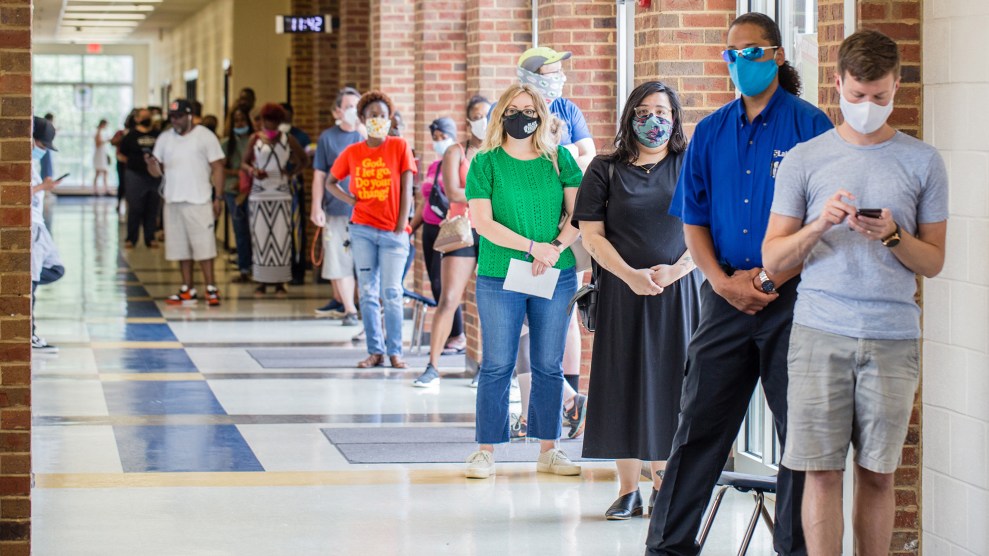 Voters wait in long lines at an Atlanta-area elementary school on Tuesday, June 9, 2020. The lines around lunchtime were taking two and a half hours.TNS via ZUMA Wire

It’s practially a given that any major election will produce images of voters waiting in hours-long lines. It’s already happening in the run up to November, as waits have piled up outside of early voting sites.

Sen. Ron Wyden (D-Ore.) has an idea to help keep waits to under 30 minutes: force states where it takes longer to make direct financial restitution to voters.

The People Over Long Lines (POLL) Act, co-sponsored by Sen. Jeff Merkly (D-Ore.), would also allow voters to collect $50 for waiting longer than 30 minutes, with an additional $50 for each hour after that. If a court determines that the long lines were somehow intentional on the part of election officials, or caused by wreckless disregard of wait times, the payments ballon to $650 per voter after the first half hour, with $150 more each additional hour.

The bill would allow voters to collect $50 for waiting longer than 30 minutes.

While such payments are unlikely to become a reality, voting delays have very real consequences, including people who are forced to leave before they can cast a ballot. In 2012, between 500,000 and 700,000 votes were lost to long lines, according to an estimate prepared for the federal Election Assistance Commission. Long lines tend to disproportionately impact minority communities; the same study showed Black voters waited twice the time as whites. The reasons behind long lines vary—reduced polling locations, staff shortages, equipment breakdowns, poll workers not showing up due to COVID-19 fears—but the net result is, to some, blatant voter suppression.

“Voting shouldn’t be a war of attrition,” Wyden said in a statement releasing his bill Wednesday. “It is a national disgrace that millions of working Americans, seniors, and parents are forced to stand in line for hours just to exercise their God-given right to vote.”

The bill would provide $500 million in federal funding to local election administrators to help them speed voting, and establish Election Assistance Commission audits of state performances. It would also mandate that voting locations have sufficient emergency ballots on hand to allow people to vote even if equipment fails, as happened in several places across the country during the 2018 midterms.

Senate Majority Leader Mitch McConnell has blocked nearly all federal election-related legislation, arguing that elections are primarily state-run and that the  federal government has little role in protecting them from foreign interference or ensuring they are administered fairly.

“Senator McConnell has been crystal clear that he opposes any bill that makes it easier or safer for Americans to vote,” Wyden told Mother Jones. “I’m not holding my breath that he’ll change his mind this time around. But any American who is stuck in line, waiting for hours to cast a ballot, needs to know that it doesn’t have to be that way.”