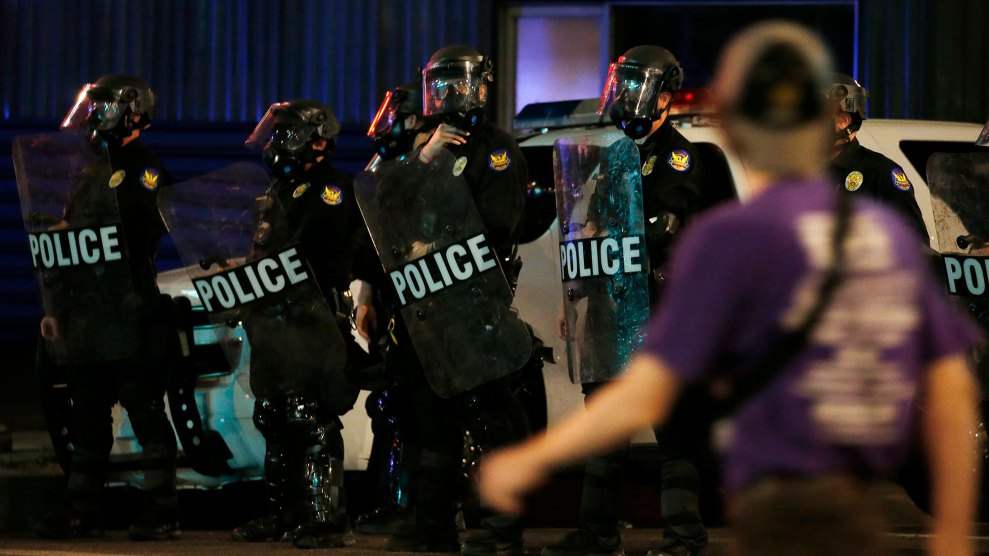 On May 30, Johan Montes Cuevas heard about a protest against police brutality in Phoenix from a couple of friends. They got together and talked about going downtown to watch thousands march in support of the Black Lives Matter movement. Montes Cuevas was unsure about going, “since I obviously have to be more careful because of my status.” In the end, he decided to go.

As the night went on and the protest grew in size, Montes Cuevas remembers being impressed with the large turnout. “That goes to show how much people care,” he thought to himself. “We all just want equality.” Eventually, his fiancee called and told him to go home, just to be safe—she is a US citizen, but Montes Cuevas is not. “I just never thought anything would happen,” he told me.

The three friends stayed a bit longer before heading back to their car to leave. As they sat in traffic, the police showed up. One of Montes Cuevas’ friends posted a video on social media showing police officers pulling people out of cars to arrest them. Soon, the three of them found themselves on the ground, at the feet of a group of Phoenix cops holding riot shields. They were booked and charged with rioting, alongside some 100 other people arrested in downtown Phoenix that night.

The next morning, as people were released from jail and started heading home, Montes Cuevas, one of his friends, and two other undocumented people who also had been picked up at the protest were surprised to find Immigration and Customs Enforcement agents waiting to take them into custody as soon as they stepped outside.

As protests spread across the country following George Floyd’s death in late May, so did warnings to undocumented immigrants thinking about joining the demonstrations. Messages on social media warned that ICE officers were on the ground: “ICE is at the protest, if you’re undocumented leave!” one person tweeted. “Please if you’re of undocumented status or have DACA PLEASE PRIORITIZE YOUR SAFETY FIRST! ICE is taking advantage,” read another tweet. “CBP and ICE agents are at protests across the country. They have made claims to the media they aren’t going to arrest people, but we know they are notorious liars,” tweeted the advocacy group United We Dream. “Stay alert. Plan ahead.” There were soon online guides with resources on what undocumented people could do to stay safe, because an arrest at a protest has the potential to end in deportation.

Montes Cuevas, 22, didn’t see those posts online. He was born in Mexico but has lived in Phoenix since he was six months old and says he considers himself “more American than Mexican sometimes.” Over the last few years, he has received temporary protection from deportation and a work permit under the Deferred Action for Childhood Arrivals (DACA) program. To qualify for DACA, he had to meet multiple requirements, including having a clean criminal record. “I’ve always had in mind that if at any point I get arrested,” he told me, “there’d be a big chance I could be deported.”

“I’ve ways had in mind that if at any point I get arrested there’d be a big chance I could be deported.”

The night he spent in jail, Montes Cuevas said, he didn’t get to make a phone call until 10 hours after he was arrested. His fiancee and his family were worried sick. “This isn’t the first time we all lose someone; we’ve lost undocumented family before,” he said, speaking about an all-too-common scenario in which a loved one gets picked up by ICE and never comes home.

US Customs and Border Protection said in an email to Mother Jones last week that the agency had deployed resources to “several states undertaking various operational support roles at the request of fellow law enforcement agencies.” The CBP agents were sent to “confront the lawless actions of rioters,” not to carry out an immigration enforcement mission. An ICE spokesperson echoed that sentiment in a separate email. Nonetheless, their mere presence was enough to set off shockwaves across undocumented and mixed-status families. And as Montes Cuevas’ experience shows, local police departments continue to work with ICE in certain cities across the country, turning any interaction with the cops into a potential crisis for undocumented immigrants. In Arizona, police and ICE have worked closely together for decades. In fact, many protesters in Phoenix last week not only demanded an end to police brutality but also urged the Phoenix Police Department to end its collaboration with ICE.

“Attending a protest is such an individual choice, but it has very different consequences if you’re a citizen or not,” said Reyna Montoya, a DACA recipient and founder of Aliento, a nonprofit that provides art therapy to immigrant communities. “This is a very complicated, multi-layer situation…how do you make sure that, if you want to show solidarity and come out, that you’re not afraid of getting deported or potentially being sent to a detention center?”

“How do you make sure that, if you want to show solidarity and come out, that you’re not afraid of getting deported or potentially being sent to a detention center?”

Like many in the immigrant rights movement, Montoya has seen the direct impact protests can make. In 2012, President Obama launched DACA in response to nationwide pressure from immigrant rights groups that took to the streets. In 2006, millions of people protested in massive marches pushing for immigration reform. Montoya was in high school then and remembers her parents telling her to stay home and study so they could march for the whole family. “Sometimes in marginalized communities [protesting] is all we have,” Montoya said. “Especially as an undocumented person or DACA, we don’t have the power to vote, so we’ve been able to rely on other tactics to be heard.”

Montoya said she’s been having conversations with young people who “want to be there for our Black brothers and sisters who are being brutalized by the police at the moment,” and she understands the feeling of wanting to do something beyond posting on social media. “On the other hand, right now there are severe consequences,” she said. “People are being taken away from their cars even as they are leaving a peaceful protest. I’m legitimately very scared of the consequences for some of the DACA and undocumented students I work with.”

The night Montes Cuevas was arrested, Máxima Guerrero, a local immigrant rights organizer with Puente Human Rights Movement, was also arrested as she was leaving. Sandra Castro Solis, who also works at Puente, said Guerrero was there as a legal observer, “making sure people’s First Amendment rights weren’t violated while protesting.” She expected to be confronted by militarized police, but she wasn’t expecting “arrests and charges to be so egregious that they would lead DACA recipients to be held by ICE,” or for people who weren’t even attending the protests to end up detained.

Which is exactly what happened to Corina Paez and her boyfriend, Jesus Orona Prieto. They weren’t downtown to protest or even observe—they were simply on their way to dinner. (Arizona has been “open” for weeks now and has relatively lenient physical distancing rules.) Paez told me in a phone call last week that police also pulled them out of the car and arrested them for rioting, “even though I tried to explain to them that we weren’t doing anything.” Paez, a US citizen, was released the next morning, but Orona Preto doesn’t have DACA or other forms of legal immigration status. As of Wednesday, he remained in ICE custody at the Florence Correctional Center, a facility with 21 confirmed COVID-19 cases.

She wasn’t expecting “arrests and charges to be so egregious that they would lead DACA recipients to be held by ICE.”

Puente’s work has focused on getting people released from ICE custody, especially with the coronavirus pandemic continuing to spread in detention facilities. As soon as organizers heard about the arrests May 30, they started mobilizing. They made calls to ICE and to the mayor of Phoenix, demanding that the four people detained at the protest be released from custody. By June 1, three were let out, including Montes Cuevas.

Montes Cuevas was put on supervised released and has to wear an ankle monitor. “It feels like I’m a criminal when I’m not. It feels like I’ve done something so wrong or committed the biggest crime ever, and now I’m marked with this around my ankle,” he told me. “I can hide it with jeans, but it’s a bulk around my ankle. Someone can tell what it is. It’s summertime in Arizona, and we’re going to wear shorts and that’s what people look at first.”

He’ll have to check in with ICE, continue wearing the ankle monitor, and hire a lawyer to help him navigate what’s next. He fears that he may miss something and, because of a simple bureaucratic error, “they’re going to straight-up deport me for that.” Plus, if the charges from the protest aren’t dismissed, it could mean losing DACA and the protection from deportation that goes with it. (That same weekend a judge in Phoenix found that there was no probable cause for most of the more than 100 arrests from the night Montes Cuevas was arrested.)

“It was something historic, so in a way I do not regret it,” Montes Cuevas told me when I asked if he wished he hadn’t gone to the protest. “But as much as I would like to protest—especially given my situation now seeing how unjust this all was—I would like to go, but I’m going to have to think about it twice.”

“I would love to tell people to be as free as Americans, to do what we feel is right, like protest, but it’s a scary situation.”