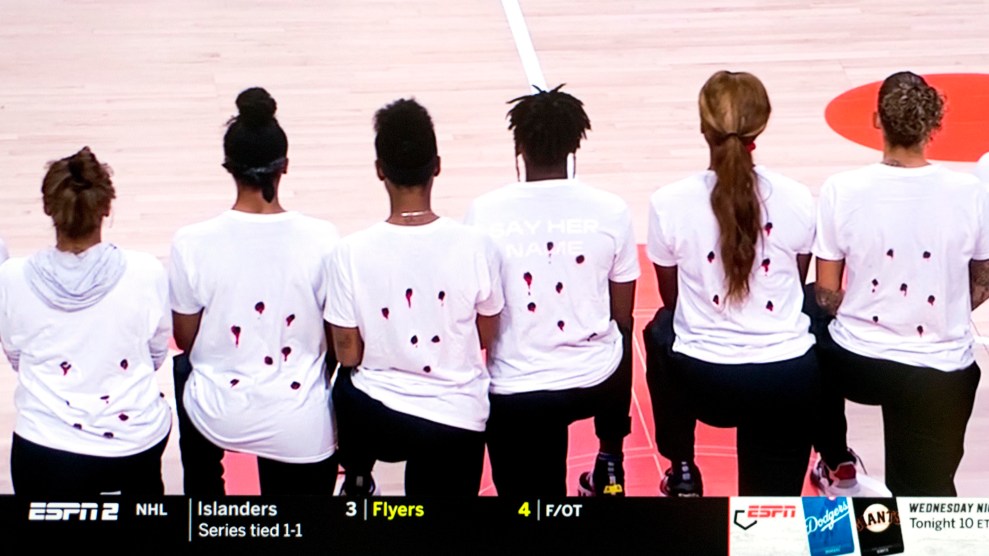 The Washington Mystics wear T-shirts with seven red circles on the back to protest the shooting of Jacob Blake by police. Courtesy Espn2/ZUMA Wire/Cal Sport Media via AP Images

NBA players return to the court today after ending a strike that started earlier this week over the police shooting of Jacob Blake in Kenosha, Wisconsin. The league and players, reportedly with some encouragement from Barack Obama and Michael Jordan, agreed to resume games and establish a social justice coalition that will, among other things, focus on improving voter turnout and pushing for criminal justice reform.

The strike was a powerful act of protest that inspired other athletes elsewhere in sports—from the WNBA to professional baseball to soccer and tennis and college football—to do likewise. Colin Kaepernick, who famously knelt before San Francisco 49ers games four years ago to protest police brutality, wrote to LeBron James thanking him for his solidarity.

But let’s not forget that there already was a social justice coalition in professional basketball. And that plenty of pro basketball players had already risked their paychecks by taking a stand on matters of social justice. I’m talking about WNBA players, who have long been among the most effective and persistent activists in sports, though they are little recognized for it.

WNBA has had a social justice council since the beginning of the season. Just a reminder that they have been the blueprint for professional sports. https://t.co/1ZkgdpBFWY

Nearly two months before the NBA announced its social justice coalition, the WNBA in early July launched its own version. Players decided to dedicate their season to Breonna Taylor, the 26-year-old EMT who was killed when police barged into her Louisville, Kentucky, home in a March raid. The WNBA players announced that their Social Justice Council, with support from advisers including Black Lives Matter co-founder Alicia Garza, would raise awareness about issues of race, voting rights, LGBTQ advocacy, and gun control to “address the country’s long history of inequality, implicit bias and systemic racism that has targeted black and brown communities.”

After Kenosha police shot Blake seven times in the back last weekend, the NBA’s Milwaukee Bucks said they were striking on Wednesday, and other teams in the league soon joined. That night, the WNBA’s Washington Mystics walked onto the court wearing shirts that together spelled out Blake’s name, with seven red circles in the back of each shirt, drawn to look like bullet holes. The players pushed their league to postpone its scheduled games as well. “This isn’t just about basketball. We aren’t just basketball players,” Washington Mystics guard Ariel Atkins told ESPN. “We’re going to say what we need to say.”

In Slate, Maitreyi Anantharaman documents the WNBA’s long history of activism—on everything from gun violence to abortion rights to police brutality. Players have made great sacrifices to show up for causes that are important to them. Minnesota Lynx star Maya Moore, an Olympian in the prime of her career, left the league last year to to push for the release from prison of a wrongly convicted man named Jonathan Irons; he was free in July. And earlier this month, after Kelly Loeffler, a Republican senator and WNBA team co-owner, criticized players for their activism, some wore pregame shirts endorsing her political opponent. WNBA players raise their voices even when the stakes of doing so are high, and they’ve scored results. As Anantharaman writes for Slate:

A thorny truth: In the stark terms of dollars and cents, the women here wielded far less power than did the men. “When we talk about playing and not playing, the implications that has on a female basketball player [relative to] a male basketball player are dire,” Nneka Ogwumike, an All-Star forward for the Los Angeles Sparks and president of the WNBA’s players union, told ESPN when asked about the risks of the players’ decision.

Ogwumike is right to some degree. The WNBA’s financial circumstances—it is said to be heavily subsidized by the NBA—have always transmitted a kind of unspoken threat to the league’s players. Why rock the only boat that stands between you and drowning? But WNBA players do have quite a bit of leverage, if not the kind that shows up on a balance sheet. Their activism has earned their league and its parent company enormous goodwill. For years, they have dutifully played their parts as crown jewels of the NBA’s claim to progressivism. At any moment, they can call the NBA’s bluff in public spectacle. When they, say, agitate a member of the ownership class, the women of the WNBA can force a league to decide whether it will really live up to the marketing copy.

By all means applaud the NBA players for joining the fight, but be sure to remember the women who were there, too, rolling up their sleeves and showing everyone how to get shit done, despite making less money and getting less attention for their troubles.