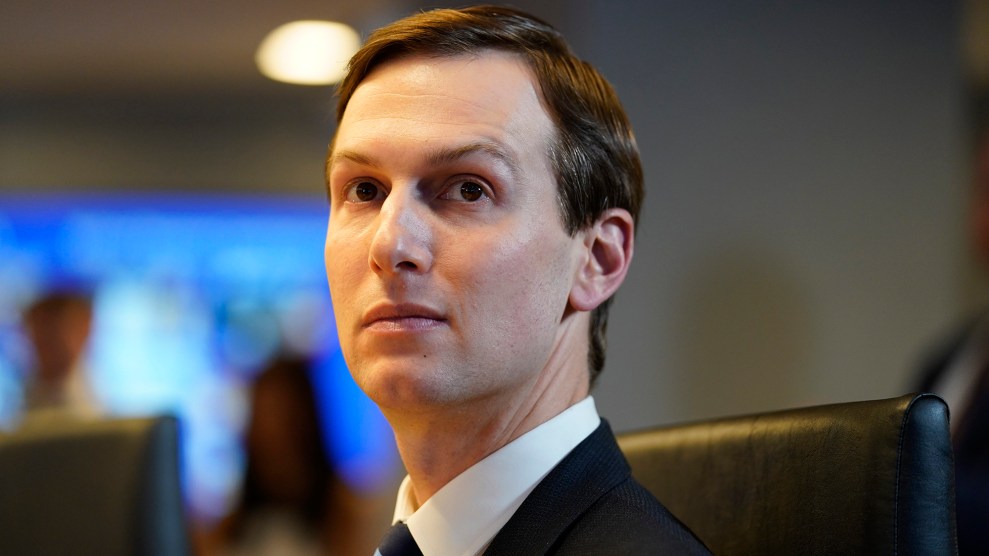 Last week I wondered whether the massive real estate firm partially owned by Trump’s son-in-law Jared Kushner would give renters a break as the coronavirus spread, businesses shuttered, and tens of thousands of people lost jobs.

I never heard back from the White House or the Kushner Companies, but it didn’t take long for at least one Kushner tenant to provide an answer: Nope!

Delays caused by the unfolding coronavirus crisis could play to the company’s benefit.

On Thursday, March 19, Westminster Management—which is owned by the Kushner Companies and boasts of holding more than 20,000 apartments across six states—sent residents in at least one property a notice about rent collection—but it wasn’t about giving them a break on rent, nor did it include any reference to the unfolding COVID-19 crisis, according to emails and other correspondence reviewed by Mother Jones.

Under the corporate logo—a “W” with the roof of a house perched on top—the email began “IMPORTANT CHANGES TO BILLING & PAYMENTS,” before outlining a new online platform that would accept credit or debit card rent payments for a fee, or by e-check without additional charge.

Two days later, on March 21, the company sent another email to residents. While it acknowledged the global pandemic by saying the company hoped “you all stay safe and healthy in these challenging times,” it went on to tell tenants to sign up for the new payment platform “asap.” Despite the request for prompt action on payment, the email told residents the management company was running on limited resources and that, due to the need to prevent contact between staff and residents, rent-payers could expect fewer services and directed that anything beside emergency maintenance requests should wait “until the situation has improved.” In a separate communication days later, the company announced the closures of its buildings’ fitness centers, asked tenants not to come to their management office in person, and noted the company would be asking about the health status of tenants before completing non-emergency repairs.

“Please all be safe and healthy,” the March 21 message concluded. “We will get through this, it is all just a matter of time.”

On Wednesday, March 25, the company again reminded tenants of the new rent-payment platform, this time via paper notices slipped under apartment doors. The messages had no mention of any rent breaks or a willingness to work with tenants facing financial hardship due to the coronavirus.

Delays caused by the unfolding coronavirus crisis could play to the company’s benefit. One of its properties, 18 Sidney Place in Brooklyn, has at least two ongoing code enforcement violation actions from city housing inspectors, one related to mold, the other to roaches. That violation was ordered to be handled by March 26 and certified as complete by March 31, subject to court penalties. It’s not clear if that work has been done. A spokesperson for the agency told Mother Jones that inspectors are still working, but did not have any specific information about the resolution of violations pending at the building. A hearing in a lawsuit that could see the company pay out hundreds of thousands of dollars to that building’s tenants for allegedly overcharging rents was originally set for Friday but has been put on hold, according to documents filed in the case.

While it’s unclear how the Senate’s just passed coronavirus economic relief bill would effect large apartment companies like Kushner’s, the deal included language barring Trump family members, including his son-in-law, from getting direct federal assistance. But the bill is written, the New York Times has reported, in such a way that Kushner’s business interests may still benefit.