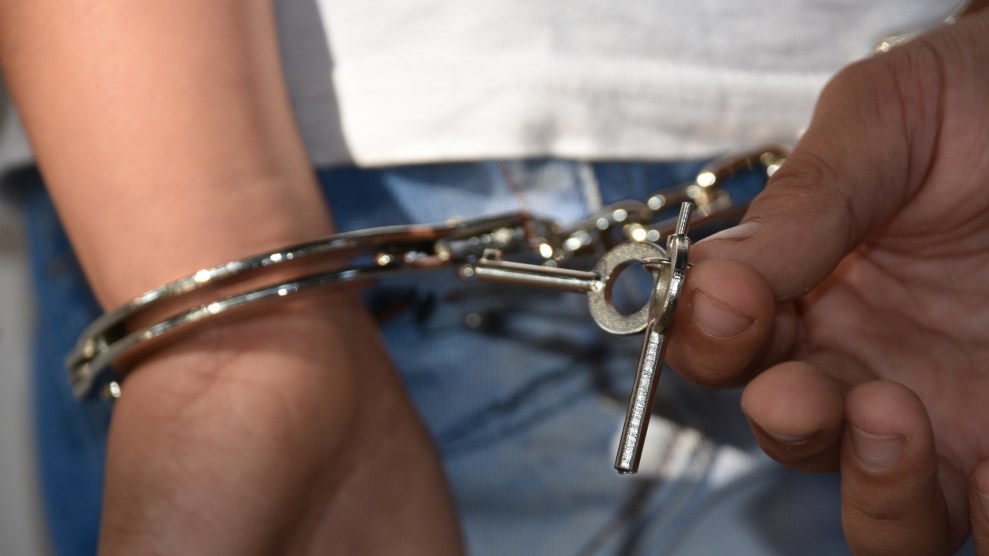 Since the beginning of the coronavirus outbreak in the United States, criminal justice experts, health professionals, and prisoners have warned that the virus could easily spread through crowded and dirty jails and prisons. With cases being identified daily among inmates, including in California, Colorado, Georgia, and Illinois, calls are mounting to release the most vulnerable of America’s 2.3 million incarcerated people, including older prisoners and those with underlying medical conditions.

On Rikers Island in New York City, which locks up more than 5,000 people, the potential toll from coronavirus is already becoming visible: 75 inmates and 37 staff had confirmed COVID-19 cases as of Wednesday. An investigator for the New York City Department of Corrections died last week. Mayor Bill de Blasio announced Tuesday that the city would release 300 people with misdemeanor or nonviolent felony convictions from the jail.

It may be too late to control the Rikers outbreak, says Aaron Littman, a teaching fellow at the University of California, Los Angeles law school and former litigator for the Southern Center for Human Rights. “But,” he says, “jails and prisons across the country, especially in communities that have not been hit as hard thus far, have a closing window of opportunity to dramatically decrease harm to a lot of people.” Yet they must act now: “If they wait until there are infections in their jails and prison, it will likely be too late.”

As the public health crisis expands, Littman has been scouring state laws to determine exactly what powers officials have to release incarcerated people en masse in times of emergency or pandemic. It turns out that there are many laws that already provide longstanding, if rarely used mechanisms for doing so. I called Littman up to hear more.

I saw a viral video recently showing hundreds of inmates running away from a semi-open prison in Brazil. I guess that’s one way to decarcerate. But tell me about the legal methods.

Aaron Littman: I would describe the power to decarcerate as a mosaic. And there are lots of overlapping powers. That ranges from the beat police officer who has the discretion to issue a citation or a summons rather than arresting somebody, to a booking officer in a jail who has the discretion to cite and release somebody rather than incarcerating them, to a range of powers that different officials have to release people due to an outbreak of disease. In California, it is the chief jail physician. In Massachusetts, it is the jail or prison inspector. In Mississippi, there’s a statute that says that if any infectious or contagious disease shall appear in the vicinity of any jail, the board of supervisors of the county [or other officials] “may cause the prisoners confined in such jail to be removed to some suitable place of security, for safe-keeping, until the threatened danger shall be over.” These provisions can be used to release people to home confinement.

[In at least 13 states, the laws] specifically reference outbreaks of contagious disease—what some of them call “pestilence,” which helps us know that they’re old statutes. But in some cases, they are broader. One California provision just describes an “emergency endangering the lives of inmates.”

“This is a moment for an emergency provision to be used…to release people who, frankly, never needed to be in jail in the first place.”

“Pestilence” is a word I’d never use normally. But right now, it feels biblical in a way that’s almost true to what we’re living through.

AL: It does. I’ve looked some into the history of these provisions. And they have, as far as I can tell, not been frequently used. And I think that simply reflects the world-historical nature of what’s happening. This is a moment for an emergency provision to be used—as well as the array of authority that already existed to release people who, frankly, never needed to be in jail in the first place. People who were in jail because they couldn’t make bail because they were too poor. People who have been accused of very low level crimes, urinating in public, that sort of thing.

What are some examples of authority that exists in normal times—not just in the middle of a pandemic—to release prisoners?

AL: There are a variety of other release provisions that different officials, particularly sheriffs and commissioners of corrections, have in normal times that they can use now to get as many people out of their facilities as possible. In Wisconsin, state law makes clear that a sheriff has the discretion to determine who in his or her jail is placed in home detention. There are also overcrowding release [laws] that exist in many states that allow some constellation of local actors to release people once a population cap has been met. And many of these facilities are overcrowded. In most jurisdictions, governors can grant temporary reprieves from criminal sentences that would allow prisoners to return home, and then be reincarcerated if necessary after the pandemic has passed.

What have been the most promising developments that you’ve seen so far, as far as actions that public officials have taken to get people out?

AL: The New Jersey Supreme Court’s order [releasing up to 1,000 inmates from jails] was powerful. I think the Los Angeles County Jail has has been taking this seriously and is on the way to making the population reductions that are necessary. I don’t think it’s there yet. There are examples of steps in the right direction, but I don’t think anywhere is where it needs to be. Dramatic population reductions in all facilities need to happen quickly. I think that if they don’t, a lot of people die unnecessarily.

This interview has been edited and condensed for clarity.