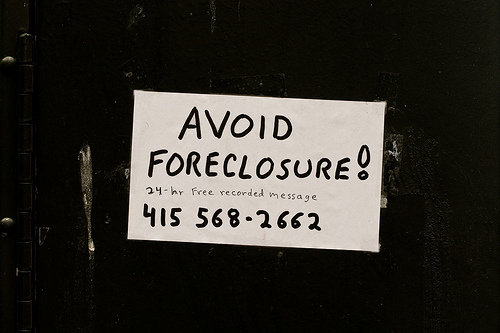 It begins with a flyer on your front doorstep, a roadside sign with a local phone number, an ad on TV. “Stop Foreclosure Now!” “We guarantee to stop your foreclosure.” “We stop foreclosures every day. Our team of professionals can stop yours this week!” They promise quick access to your bank or lender, and a way out of foreclosure and losing your home. They seem almost too good to be true, especially if you’re a beleaguered homeowner clinging to your house.

Almost always they are too good to be true. Welcome to the world of the foreclosure rescue scam. Just as epic levels of fraud helped cause the subprime crisis, now, in the wake of the greatest housing meltdown in at least a generation, thousands of scheming, manipulative foreclosure relief swindlers are preying upon desperate homeowners unschooled in consumer finance and looking for help. The FTC, for example, reported 7,927 complaints on “mortgage modification and foreclosure relief” last year; in 2008, it had one. The Illinois Attorney General filed 31 different lawsuits last year regarding mortgage rescue scams, and the Florida AG filed 20 within the past year.

This newest wave of housing fraud is documented in painstaking detail in a new report, “Foreclosure Rescue Scams: A Nightmare Complicating the American Dream,” to be released today by a leading housing advocacy group, the National Community Reinvestment Coalition, as part of a hearing held by the House oversight committee. An early copy of the report was obtained by Mother Jones.

To document the pervasive foreclosure relief scamming out there, NCRC arranged more than 200 different undercover “shops,” or visits with, these swindlers, getting details on numerous relief scams and probing what each claimed to offer. The services had names like 123 Fix My Loan, Help U Modify, and Legal Loan Bailout; others were clearly intended to confuse homeowners by sounding like legitimate government or private programs, like HopeNow Mortgages or Federal Loan Modification Bureau. In all, 115 foreclosure relief services were identified in NCRC’s investigation. (So shady are some of these scams that 17 of them didn’t even have legitimate phone numbers.)

The fear, the NCRC report says, is that these rackets draw homeowners away from real programs that could help them. “Modification companies are often operating in a regulatory vacuum, without any accountability, and may be preventing consumer access to the Home Affordable Modification Program,” the report says.

These scams usually lure in homeowners with the promise of quickly moving through state and federal relief programs and speeding up talks with mortgage servicers, who handle the day-to-day dealings with borrowers and manage the foreclosure process. What foreclosure relief services truly do, however, is a classic bait-and-switch: They promise help on the quick, ask for cash upfront to do the deal (a sure-fire sign the service is a rip-off; no state or federal agency ever requires upfront fees), then leave homeowners for broke and take their money, or sometimes even the title to their house. “Ultimately, the consumer, who thought they were working with a reputable firm,” the report says, “loses their home to foreclosure despite their best intentions.”

In addition what NCRC calls “phantom help,” where scammers take your money and run without helping at all, there are numerous other similar swindles. Some foreclosure relief companies steal a borrower’s identity and use that to buy properties or take out mortgages. Others do what’s called a “lease buy-back,” where they contact a struggling homeowner and convince them to sign a homeowner’s deed over to the relief company, who promises they’ll let the homeowner rent the house, get their finances in line, then buy back the house. However, what can happen is the scammer instead evicts the original homeowner, then rents or sells the house.

Another tell-tale sign of a foreclosure relief scam is when an employee or salesperson actively tells a homeowner not to make their mortgage payments or even contact their bank. Here’s an example from one of NCRC’s undercover calls:

In a test of a company in Ohio, an agent emphasized that the control tester should not speak to her bank, and that if she gave them financial information, it would hurt her chances of receiving assistance. The agent said that he would give the bank what information they needed to know, and that the tester should not make her payment while he negotiated.

All of which begs the question: Isn’t anyone cracking down on these predatory relief crooks? As the NCRC report lays out, a number of states have enacted their own safeguards. At the federal level, Rep. Gwen Moore (D-Wisc.) has introduced a law intended to rein in these swindlers; however, NCRC says the bill’s loopholes are so big they almost swallow the entire law itself, letting attorneys and real estate brokers off the hook even though they’re often the most sophisticated of relief scammers. Another cop on the beat is the FTC, which has for years tried to stop foreclosure relief scammers.

The impacts of these foreclosure relief con artists can, just like a foreclosure, wreak havoc in the surrounding community, the report concludes, which is why cracking down on these profiteers is seen as so critical. “At the end of the process, consumers find themselves without equity, with scarred credit, and with nothing to fall back on. Community ties are ruptured and neighborhoods become more prone to blight, disinvestment, and elevated crime.”