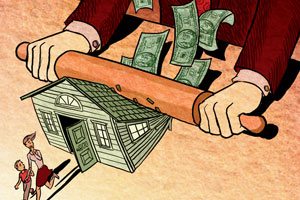 NO ONE TOLD Deanna Walters she was about to lose her home. Not when her mortgage servicing company foreclosed on it, nor when it landed on the county auction block and sold to the highest bidder. She realized what was happening only when a man taped a note to the front door of her well-kept house in a leafy corner of Stockton, California, last January. “My son went out and took it down,” recalls the 43-year-old single mother of two, “and that’s when he told me it was a ‘three-day or quit’ notice.”

Walters’ discovery that her home had been sold out from under her marked the low point of a four-year fiasco that began when Ocwen Loan Servicing became her mortgage servicer in late 2004. Through no fault of her own, Ocwen incorrectly processed or lost dozens of Walters’ payments and charged her more than $2,000 in late fees and thousands more in additional charges—all without notifying her. The Florida-based company tried to foreclose on her three times. After she paid more than $10,000, Walters figured things were settled. But Ocwen had other ideas.

Sitting in the storefront office where she runs a tax preparation business next door to the local congressman’s office, Walters recounts her ordeal. She riffles through stacks of account statements and correspondence with the state and federal regulators she’s complained to. She has managed to stay in her home for now, but with little help from those agencies. “No one will deal with these people,” she laments. “Why isn’t anyone doing anything?”

Mortgage servicers are the housing industry’s middlemen, low-profile companies that handle the day-to-day business of collecting payments, managing paperwork, and initiating foreclosures. Some banks, such as Wells Fargo and Bank of America, have their own mortgage-servicing arms; others contract with companies like Ocwen. Either way, borrowers are largely at their mercy: They have no say in who services their mortgages, and they can’t fire their servicer for doing a bad job. “They’re set up to be dictators,” says Irwin Trauss, a housing attorney at Philadelphia Legal Assistance. “They’re set up to say, ‘It’s my way or the highway.'”

The housing bust may have revealed the shady side of the home loan industry, but unscrupulous mortgage servicers still have little incentive to change. Last year, the Department of Housing and Urban Development (HUD) received nearly 2,500 complaints about servicers, a 379 percent increase over 2007. In the first 10 months of 2009, consumers filed about 1,000 legal complaints against 10 of the largest servicers for illegal foreclosures and other predatory practices. A Florida widow is suing her servicer for allegedly badgering her husband with as many as nine collection calls a day, causing a fatal heart attack.

A federal class-action suit against Ocwen asserts that it has hiked mortgage payments without fair notice, forced borrowers to buy unnecessary insurance, and intentionally processed payments late. Ocwen’s general counsel, Paul Koches, says the lawsuit is baseless. He wouldn’t comment on Walters’ case, but said the company complies with and “takes all federal, state, and local laws seriously.”

The Obama administration’s Home Affordable Modification Program (HAMP) has set aside $75 billion to pay servicers to rewrite mortgages so homeowners can stay in their homes. (See “We’re Paying WHOM to Fix Subprime Mortgages?”) Beyond that, though, servicers have little incentive to help borrowers, because they can reap lucrative fees from arrears and foreclosures. “Fees have exploded since the meltdown,” says Trauss. Testifying before the Senate banking committee last July, Diane Thompson, an attorney with the National Consumer Law Center, explained that servicers have an incentive to “push” homeowners into late payments: “If the loan pays late, the servicer is more likely to profit than if the loan is brought and maintained current.” After Ocwen auctioned off Deanna Walters’ house, it collected more than $3,500 from 36 different buyers’ fees, in a single day.

Oversight of this troubled industry is spotty. “This is a very underregulated part of the system,” says Jack Guttentag, an industry expert and professor emeritus of finance at the Wharton School. “It shouldn’t be, because it’s the part where the consumer has no place to protect themselves.” Federal law allows servicers to send borrowers only one account statement a year—even if there are scheduled interest rate increases or new fees added during that time. If a borrower has a problem, HUD encourages her to first file a complaint with the servicer, and if there’s no resolution after nearly three months, she can then appeal to the agency—assuming she hasn’t been evicted in the meantime. While HUD can step in to fix the problem, it lacks the power to impose tough sanctions on servicers.

The Federal Trade Commission (FTC), Office of the Comptroller of the Currency, and Office of Thrift Supervision also have limited oversight over the mortgage industry. An OTS spokesman could name only one formal action the agency has taken against a servicer—Ocwen, in 2004. An OCC spokesman said his agency has never taken action against servicers.

The FTC has settled three major cases since 2003, resulting in settlements totaling almost $70 million. But even that hasn’t kept servicers in check. EMC Mortgage, a JP Morgan Chase subsidiary, settled with the FTC in 2008 for misleading and ripping off borrowers. That settlement, however, didn’t help consumers like Tammy Cothran, who says EMC foreclosed on her house outside Pensacola, Florida, even though she wasn’t in default. She has appealed to state and federal agencies, and even faxed the White House daily for five weeks. Those efforts left her frustrated: HUD told her it couldn’t help because her mortgage isn’t insured by the Federal Housing Administration, and the FTC said it was “not in a position to intervene.”

Mortgage servicers who have signed up for HAMP funds are prohibited from charging modification fees or foreclosing on participants in the program. However, the toughest penalties for noncompliance are withholding incentive payments or ejection from the program. A Treasury spokeswoman says that officials have reviewed thousands of loan files looking for mistakes or fraud. Yet in October the bailout watchdog SIGTARP cited HAMP’s poor oversight, and consumer advocates say there is no clear way to report wrongdoing. “I have yet to identify anyone to contact to say, ‘This isn’t working right. Do something about it,'” says Trauss. (For resources on dealing with servicers, click here.)

With nowhere else to turn, homeowners can always sue. Deanna Walters has sued Ocwen, and a judge has allowed her to stay in her home, even as the winner of the foreclosure auction is trying to charge her rent. Many who need legal help are those who can least afford it—like Cothran, who lost her job in May. A self-described “spitfire,” she is left to do her own legwork—”every day, all day long”—to save her home. “If you could tell me who I need to speak to,” she says, “I would be in a van tonight headed to Washington to figure this out.”