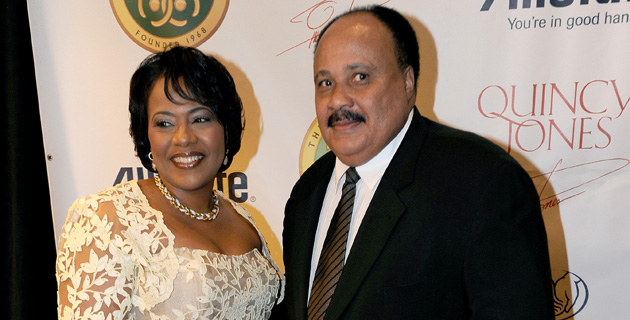 The children of Martin Luther King Jr. joined thousands of people, including Barack Obama, Jimmy Carter, and Bill Clinton, in the nation’s capital on August 28 to commemorate the 50th anniversary of the March on Washington, the landmark civil rights rally. On the very day, the King estate, run by King’s sons Martin III and Dexter, sued the King Center, the family’s Atlanta nonprofit run by King’s surviving daughter, Bernice.

The siblings were said to be mending their relationship; the peace didn’t last long.

The reason for the complaint? Following an audit, the King estate decided the King Center has been careless with King’s intellectual property—for which the estate had granted the center a royalty-free license—including recordings, papers, and even King’s corpse. The filing asks that a judge order the center to stop using King’s image and works.

The King estate is well known for being litigious over intellectual property. (Case in point: King’s “I Have a Dream” speech, which was celebrated on the mall last week.) And this isn’t the first time the King siblings have battled in court. In 2008, Martin III and Bernice sued Dexter, accusing him of excluding them from the estate’s operations. The three settled out of court and were said to be mending their relationship. The familial peace didn’t last long. From the Associated Press:

The estate supports the center’s work and has been its largest financial contributor for the past decade, but the relationship between the two “has recently become strained, resulting in a total breakdown in communication and transparency,” the complaint says.

An audit and review of the center’s practices and procedures conducted by the estate in April revealed that the care and storage of the physical property is unacceptable as it could be damaged by fire, water, mold, mildew or theft, the complaint says. After failed meetings and communications, the estate sent a letter to the center on Aug. 10 saying it would terminate the license at the end of a 30-day notice period…

Unless, that letter noted, Bernice was put on administrative leave and former Atlanta mayor Andrew Young and King’s niece Alveda, whom the estate claims impeded its audit, were booted from the board of directors.

In reply, Bernice King’s lawyer, Stephen Ryan, wrote to the center’s counsel that the brothers are trying to seize control and that their actions are “totally inconsistent with their duties to the King Center, and the spirit of their father and mother, the founder of the King Center.”

And yet, their actions are not totally inconsistent with the way the siblings have always behaved when it comes to their father’s estate. In this case, however, their timing was particularly unfortunate.