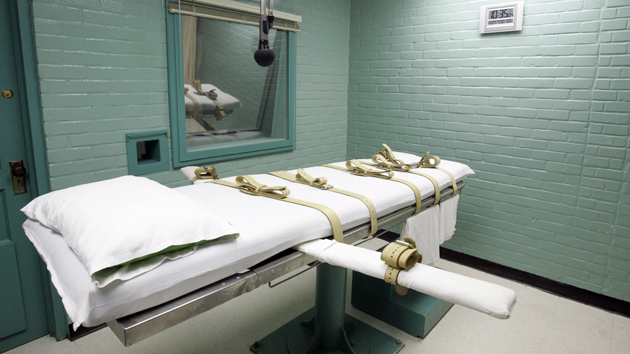 A gurney in the death chamber in Huntsville, Texas. AP Photo/Pat Sullivan

The Guardian, AP, and three local newspapers are wading into the death penalty fray with a lawsuit challenging the secrecy surrounding lethal injections in Missouri—one of more than a dozen states that have begun hiding information about their execution drugs. In a complaint filed Thursday morning with the Cole County circuit court, the news organizations argue that the secrecy violates the public’s First Amendment right to know how the condemned are being killed. The document specifically references the case of Clayton Lockett, the death row inmate who writhed and moaned in apparent agony after being injected with a secretly acquired drug combinations last month.

Prior to the execution, Lockett—who took a record 43 minutes to die—had argued that withholding the source and contents of execution drugs was unconstitutional because the untested combination could create a level of suffering that violates the Eight Amendment ban on cruel and unusual punishment. Other death row prisoners have sued to block their executions on similar grounds, but the new lawsuit appears to be the first to challenge the lack of transparency based on the First Amendment right of access. Below is a snippet from the Guardian‘s story on the case:

A Guardian survey has identified at least 13 states that have changed their rules to withhold from the public all information relating to how they get hold of lethal drugs. They include several of the most active death penalty states including Texas, which has executed seven prisoners so far this year, Florida (five), Missouri (four) and Oklahoma (three).

Attention has been drawn to the secrecy issue by the botched execution of Clayton Lockett in Oklahoma on 29 April….Lockett’s lawyers had argued in advance that he might be subjected to cruel and unusual punishment as a result of the lack of information surrounding the drugs, but the state supreme court allowed the procedure to go ahead having come under intense pressure from local politicians, some of whom threatened to impeach judges.

In the wake of the events in Oklahoma, in which the prisoner writhed and groaned over a prolonged period, the state has agreed to pause for six months before carrying out any further judicial killings to give time for an internal investigation to be completed. President Obama described the Lockett execution “deeply troubling” and has asked US attorney general Eric Holder to review the way the death penalty is conducted.

Until last year, Missouri which is now executing prisoners at a rate of one a month, was open about where it obtained its lethal injection chemicals. But like many death penalty states, its drug supplies have dwindled as a result of a European-led pharmaceutical boycott, and in a desperate move to try to find new suppliers it has shrouded their identity in secrecy.

In October, the state changed its so-called “black hood law” that had historically been used to guard the identity of those directly involved in the death process. The department of corrections expanded the definition of its execution team to include pharmacies and “individuals who prescribe, compound, prepare, or otherwise supply the chemicals for use in the lethal injection procedure.”

Since the law was changed, Missouri has put six prisoners to death using what the suit calls “a secret drug formulation obtained from secret sources.” Deborah Denno, an expert in executions at Fordham University law school, told the Guardian that the secrecy seems designed to cover up shortcomings in the system. “If states were doing things properly they wouldn’t have a problem releasing information,” she said. “They are imposing a veil of secrecy to hide incompetence.”