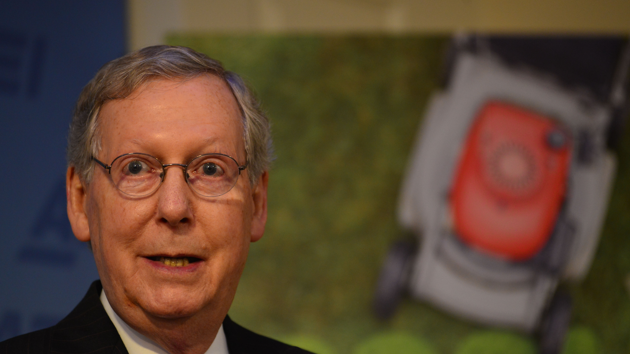 Senate minority leader Mitch McConnell (R-Ky.) will not say if he will stop blocking a major spending bill in the Senate that contains funding to help identify and prosecute rapists—or whether he would support a separate bill to break the log jam.

As I reported last week, since June, Senate Republicans have held up a $180 billion appropriations bill that would fund several federal agencies, including the Department of Commerce, the Department of Agriculture, and the Department of Justice. Part of the funding allotted for the DoJ is supposed to go toward a $41 million grant to help states and localities go after rapists by funding jurisdictions to process backlogs of rape kits, the samples of DNA evidence that are taken after a sexual assault and used to identify assailants. There are over 100,000 untested kits waiting to be processed at crime labs and police departments around the country, partly because states and localities don’t have enough money to test them. The kits can go untested for decades, allowing countless rapists off the hook.

The sweeping spending bill has hit a wall in the Senate because McConnell and other Senate Republicans want Dems to let them add several unrelated amendments to the legislation. The amendment McConnell introduced would make it harder for the EPA to enact new rules on coal-fired power plants. Democrats have complained that GOPers are abusing the amendments process to hold up a bill they don’t like. “Regardless of the outcome of the amendment votes…Republicans have indicated that they are not willing to support the underlying bill,” a Senate staffer told me last week.

On Tuesday, the Louisville, Ky. Courier-Journal asked McConnell if he would withdraw his amendment, which would indicate that he and fellow Republicans would be willing to vote for the underlying bill, including the $41 million in funding to process rape kit backlogs. McConnell dodged the question. His office did not respond when Mother Jones asked the same question this week.

Lawmakers may be able to add the rape kit funding into an temporary spending measure in October. However, neither McConnell’s office nor Republicans on the House and Senate appropriations committees will say whether they would support doing so.