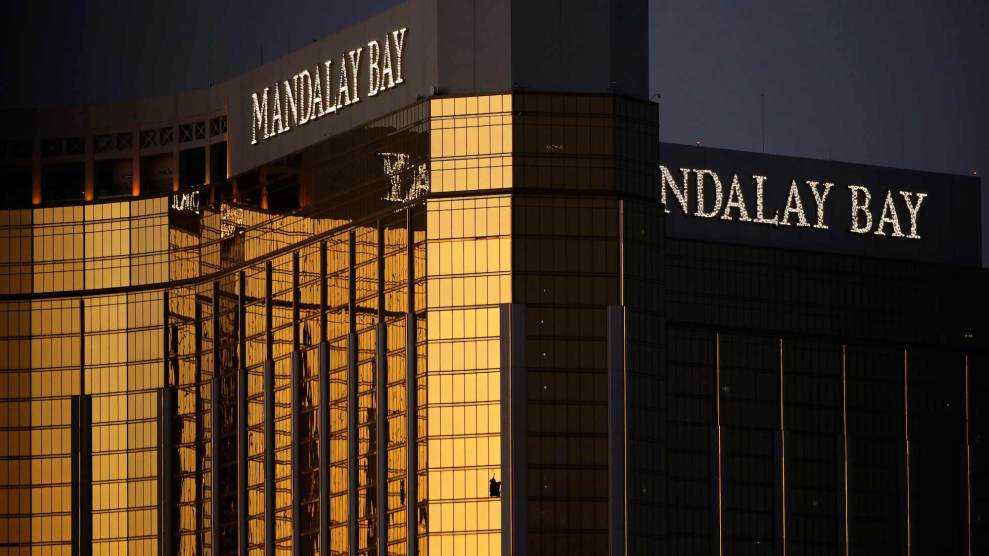 It is just before midnight the day after the worst mass shooting in modern American history and Bob Kochanski, 45, is still in the Mandalay Bay hotel and casino, sitting at a lit up slot machine. He isn’t playing, just staring out at the mostly empty casino. “You take every day for granted,” he says, shaking his head. “Until something like this happens.” He’ll say the phrase several times in the next few minutes.

Kochanski and a group of friends had arrived at the Mandalay Bay about 15 minutes before 64-year-old Stephen Paddock started shooting from high in the hotel into a crowd of thousands of concertgoers attending a three-day country music festival on the Las Vegas strip. Analysis later revealed that the gunman was able to fire off nine rounds per second, meaning he had high-powered weaponry, like a fully automatic machine gun, or more than one, or a semi-automatic rifle fitted with a “bump stock” or a “trigger crank”—mechanical add-ons that mimic automatic fire.

The shooter was on the 32nd floor. Kochanski, the 29th. But he was on a different wing. He never heard a thing. At midnight his friend called him to ask if he was all right. At around 4 a.m., he says, police cleared his room. “They were plainclothes cops. They didn’t barge in. They had a key. Other rooms had SWAT with night vision goggles and everything. I just got, ‘Let me see your hands.’ They went around the room with the flashlight, asked, ‘Is anybody else is here?’ ‘No, it’s just me.’”

Kochanski says the hotel was on lockdown until about 8 a.m. He took the elevator down from his room to the main floor and entered what he calls “a ghost town.”

“You coulda heard a pin drop. This is Vegas. It’s just not normal. We come down this morning, they won’t let anybody on the casino floor. We went by where all the restaurants were, everything is closed, food left on the tables, half-drank glasses. No music,” Kochanski says.

A hotel employee tells me that shortly after the shooting started, he and others were evacuated, and they kept getting pushed farther and farther away. “At the time we were hearing that there might be multiple shooters, that there might be a bomb. We kept waiting for this thing to blow up or something.” He finally went home at 3 a.m. when he realized he wouldn’t be able to get back to get his car. Like Kochanski, the employee says, he’s never seen Vegas look like this, feel this way. Returning to work where a man had killed 58 people and injured nearly 500 just the day before is “surreal.” “It’s been really strange,” he says. Kochanski and the employee have the same look on their face, heartbroken and in disbelief.

“I talked to a guy this morning,” Kochanski says. “Him, his wife, and his daughter were at the concert. This guy, he said he heard the shots, and his daughter, he couldn’t find her. You can imagine, people running all around. He finally found her, he jumped on top of her like a blanket. I don’t have kids,” Kochanski notes, tearing up. “I can’t imagine. I just gave the guy a hug.”

Kochanski wonders how he was so lucky. He’d been out with clients, but turned in early. “If we had waited another 10 minutes we could have been driving up the strip and been caught in that cross fire. It keeps running through my mind. Was it fate?” he asks. “All the times I been here before. We never go to bed before 10. But last night we all went to our rooms and went to bed.”

The music is loud in the casino at midnight on the day after the shooting, but not many people are up, and conversations are few. Everyone seems to be in a daze. “Forty-five years, you just take everything for granted until something like this happens,” Kochanski says again. “It’s unbelievable.”