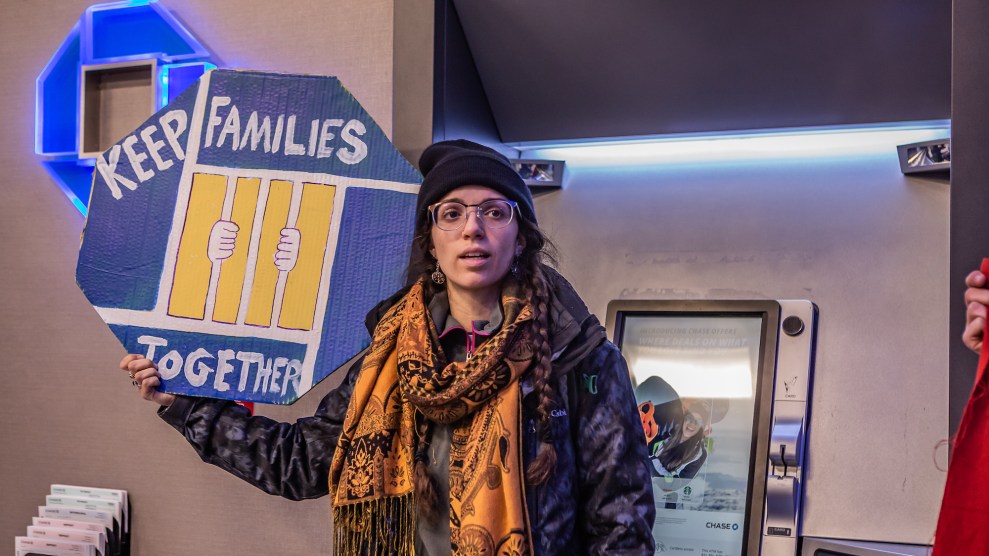 Last month on Valentine’s Day, dozens of protesters gathered outside the Upper East Side apartment of Jamie Dimon with a mariachi band and signs urging the JP Morgan Chase CEO to “break up with” private prisons.

This week, he did.

The largest US bank confirmed to Reuters and Bloomberg on Tuesday that it would no longer underwrite loans and bonds for private prison companies. JP Morgan Chase has long been one of several major financiers of the industry, whose two leaders—CoreCivic and GEO Group—brought in a combined $4.16 billion in revenue last year. (Mother Jones has reported extensively on both companies in the past.) The bank’s decision follows nearly a decade of activism pushing for divestment from the US prison industry and marks the first divestment by a major US bank at a time when some competitors, including Wells Fargo, are also signaling their discomfort with private prisons. It also comes a little more than a week after Rep. Alexandria Ocasio-Cortez (D-N.Y.), a member of the House Financial Services Committee, called for oversight hearings for major US banks over their ongoing investments in the private prison industry.

In addition to their longtime complaints about human rights in for-profit lockups, protesters and activist shareholders had been pressuring JP Morgan executives for months over CoreCivic and GEO’s association with the Trump administration’s policy of separating migrant families at the southwest border. (In statements to Reuters, both companies complained that the role of their company in family separations had been mischaracterized; CoreCivic and GEO’s immigration detention centers did not hold children separated from their families but did lock up separated parents, as well as immigrant families detained together.)

Steve Owen, spokesman for CoreCivic, called the bank’s decision “disappointing,” but what does the news actually mean for private prison companies now and for the future of the industry?

To find out, I called up Lauren-Brooke Eisen, author of Inside Private Prisons: An American Dilemma in the Age of Mass Incarceration and a senior fellow at the Brennan Center for Justice. Here are the key takeaways:

It’s a big deal: JP Morgan and other big banks are vital to the industry’s expansion.

Back in 2013, CoreCivic and GEO restructured to become Real Estate Investment Trusts, meaning the Internal Revenue Service considers them real estate companies rather than traditional corporations. The arrangement comes with huge tax breaks, but also certain rules—including that they must pass 90 percent of their real estate income to shareholders. “They can’t keep a lot of cash on hand,” Eisen explains. “That has pushed them into relying on the big banks.” Without a “war chest” of amassed income, prison companies have to go to banks like JP Morgan any time they want money to grow their business—to build a new prison, for instance, or to acquire smaller companies, like drug treatment centers and electronic monitoring businesses, as the companies attempt to diversify. As of 2016, Eisen says, CoreCivic had borrowed $63 million from JP Morgan on a more than $132 million line of revolving credit.

But on its own, JP Morgan’s decision won’t cripple the industry.

The next time CoreCivic and GEO need a loan, they will likely still have a lot of friends on Wall Street, including major lenders US Bankcorp, SunTrust, BNP Paribus, and Bank of America, according to Eisen. Wells Fargo is another, though the bank has been rolling back its involvement with the industry as well, reportedly because of an “environmental and social risk management” process. Staying involved with the prison industry carries some business risk for these banks, who may alienate investors with moral objections to private prisons (like the celebrities associated with Real Money Moves) or those who feel like the politically entangled industry is too risky an investment. But at this point, “other banks may just say, ‘Well, we’ll increase our line of credit,'” Eisen notes. “That’s what happens with divestment: One company divests and another company invests.”

It could start a domino effect.

Past campaigns to get companies, local governments, and university boards to take their money out of private prisons have set off a chain reaction. Prison divestment activism traces back to at least 2011, when Enlace, a racial and economic justice group, successfully pressured the Pershing Square Capital Management hedge fund to offload an estimated $196 million worth of shares in CoreCivic, which was then known as the Corrections Corporation of America. Companies like General Electric followed, along with government pension funds and colleges like Columbia University, whose 2015 divestment decision preceded the University of California system’s. Eisen argues that if history is any indication, the announcement from JP Morgan could have repercussions at other banks. “Jamie Dimon has a lot of influence with other CEOs and the business community,” she says. “It is likely that other investors will follow suit.” If enough do, that could lead to serious financial consequences for prison companies.

In the meantime, it’s a potent symbol of changing attitudes.

“[Divestment] isn’t just something that university students and graduate students are clamoring for,” Eisen says. “We’re seeing this not only on university campuses, but in city councils. We’re seeing this with small money management firms, big money management firms. Now we’re starting to see this with the big Wall Street banks who have not, so far, staked this ground.”