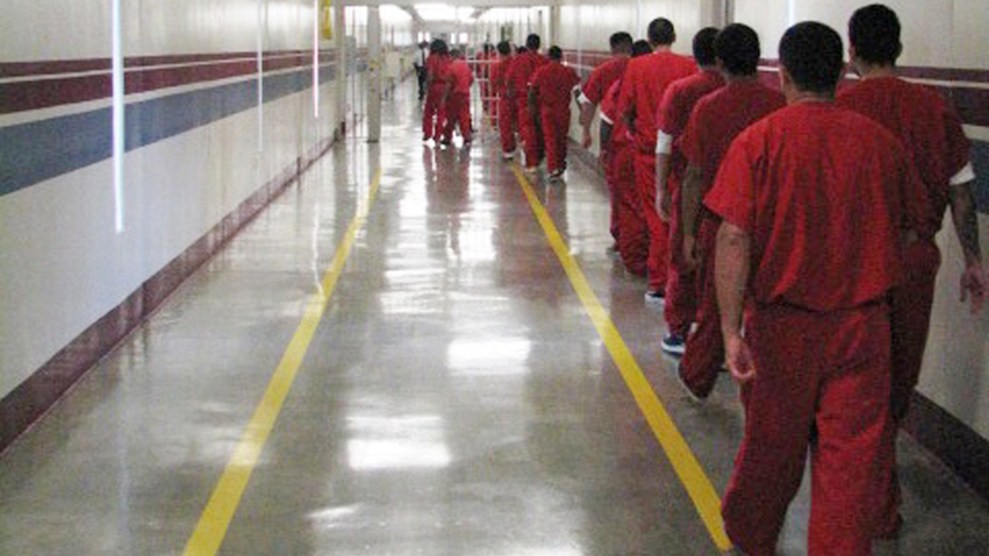 In this undated photo, immigrants walk to hearings at the Stewart Detention Center in Lupmkin, Georgia. Jeremy Redmon/Atlanta Journal-Constitution/AP Photo

After months of anticipation, about 3,000 people will be released early from federal prisons on Friday as part of the First Step Act, a bipartisan law that reformed federal sentencing and prison conditions. It’s the biggest release yet since the law was signed in December. President Donald Trump has applauded it as an example of his commitment to second chances for the incarcerated.

But not everyone in this group will get to go home. Roughly a quarter of them are not United States citizens, and many will instead be sent straight to immigration detention to face deportation proceedings, which could take years.

“Folks sadly may be thinking, ‘Oh, I’m going to be released, I’m going to go home and be with my family again,’ and many of them will probably be surprised to learn that that’s not actually the case,” says Iliana Holguin, a Texas-based attorney who is a board member with the National Immigration Project of the National Lawyers Guild.

The people looking forward to early release are getting out because they earned credit for good behavior while behind bars. The Bureau of Prisons was previously giving people 47 days off their sentence per year of good behavior, but the First Step Act stipulated that people can shave off 54 days per year instead. That change applied retroactively but was not implemented until this week, a delay that frustrated prisoner advocacy organizations, as I’ve previously reported. In addition to the people released this week, at least 1,023 others have already had their sentences shortened because the law retroactively reduced a disparity between crack and powder cocaine sentences.

The roughly 750 noncitizens who will be released Friday will likely include both undocumented people and permanent residents with green cards, some of whom may have lived in the country for years with family members who are US citizens. Following standard procedure, many will be immediately transferred to an immigrant detention facility, at which point they can attempt to request bond, though it is typically denied to people who have been convicted of crimes.

Roughly a quarter of them are not US citizens, and many will be sent straight to immigration detention to face deportation proceedings.

According to immigration attorneys, some of these people, including green card holders, will be eligible for an immigration hearing, where they can try to build a case for why they should remain in the United States. But many of them, especially undocumented people convicted of certain felonies, will be fast-tracked through the system and prepared for immediate deportation. Others who received removal orders during their incarceration can also be deported right away.

The large number of noncitizens in the group is not unusual. As the Marshall Project points out, about a fifth of all federal prisoners were born in another country. Of these, nearly half are incarcerated for drug trafficking or related offenses, and more than a quarter are incarcerated for immigration offenses. In fact, the majority of all federal prosecutions are for immigration-related crimes, especially for illegal entry or reentry. That was true under the Obama administration, too, but it’s been amplified by the Trump administration’s zero tolerance policy, which results in immediate federal prosecution for people crossing the border without documentation.

The fact that so many people will be funneled straight from prison to yet another form of detention is a reminder that the First Step Act, the first major criminal justice reform bill to pass Congress in a generation, was limited in scope and largely left immigrants behind. “This was a bipartisan effort,” says Rose Cahn, an attorney at the Immigrant Legal Resource Center, and both sides agreed “to essentially throw noncitizens under the bus.”

The First Step Act was opposed by some immigrant rights groups, including the Immigrant Legal Resource Center. The law encourages prisoners to participate in rehabilitative programs like drug counseling and job training by allowing them to earn extra time in halfway houses or home confinement if they do. But immigrants who committed certain offenses like illegal reentry are among a list of prisoners who are barred from earning this benefit. Some immigrants convicted of different crimes can ask to be included, but only if they first agree to begin immigration court proceedings and make it through without a deportation order, according to Alisa Wellek, executive director of the Immigrant Defense Project. Their odds aren’t great, given the difficulty of getting an attorney in these Institutional Hearing Program courts, which are housed within the prison system. In the last fiscal year, only 4 percent of people who went through these courts had attorneys, according to Justice Department data. Of those who didn’t, 97 percent were deported.

“If you’re not a US citizen, then you’re excluded from this notion of second chances.”

Even before the law passed, federal prisons barred undocumented immigrants from spending any of their sentences in halfway houses or home confinement, and blocked them from most prison rehabilitative programs. Immigrant rights groups had hoped lawmakers would reform these rules as part of the First Step Act, but Republicans were opposed, says Cahn, and Democrats, trying to compromise, agreed not to press for these changes. Now the rules, which were once just internal policies of the federal prison system, are codified into law.