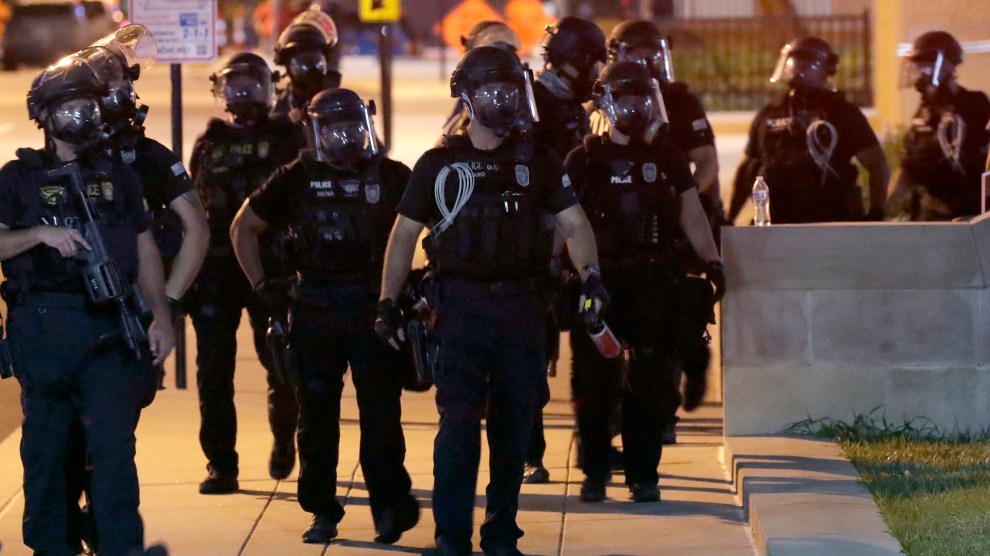 President Donald Trump spent a lot of time this week accusing Democrats of encouraging crime to fester in their cities. Hoping to ramp up arrests, he announced on Wednesday that hundreds of federal law enforcement officers are now being deployed to Chicago, Albuquerque, and Kansas City to combat violent crime. Under the plan, dubbed Operation LeGend, these federal agents will supposedly work with local police to investigate and prosecute what Trump called a “shocking explosion of shootings, killings and murders.”

Trump blames Democratic mayors and protesters for a recent rise in gun violence. “For decades, politicians running many of our nation’s major cities have put the interests of criminals above the rights of law-abiding citizens,” he said Wednesday. “These same politicians have now embraced the far-left movement to break up our police departments, causing violent crime in their cities to spiral, and I mean spiral seriously out of control.”

Has there really been an explosion of crime? And will sending federal agents to ramp up arrests quell shootings? I caught up with two national crime researchers to ask them about Operation LeGend. Thomas Abt was a Justice Department official during the Obama administration who went on to write the 2019 book Bleeding Out, which examines solutions to urban gun violence. And David Kennedy, who leads the National Network for Safe Communities, a research center focused on violence reduction, helped devise a strategy that drove down shootings in Boston in the 1990s and has since been replicated in other cities. Rather than only focusing on arrests, Kennedy’s strategy urges cities to also provide people with better access to jobs, housing, and other social services like counseling.

Both researchers, whom I spoke with separately this week, are deeply skeptical of Trump’s latest plan, but say he’s not the first to try it.

What are your initial thoughts about Operation LeGend?

Thomas Abt: I see this as a recycling of a previous strategy, the “send in the feds” strategy from 2017, where Trump threatened to send in federal agents to deal with violence in Chicago and other cities. It’s primarily a political strategy, not a policy one. There’s really no evidence that temporary surges of federal law enforcement officials are effective in reducing crime or violence. In fact, in 2016 the Police Foundation and the Major Cities Chiefs Association polled a bunch of police agencies in major cities asking them to share what was the most important type of federal assistance they needed in terms of fighting violent crime, and surges were the least popular forms of federal support. So, my view is that if Trump and the administration were serious about violent crime, they would be more responsive to the needs of cities.

When it comes to crime, the Trump administration relies on outdated thinking and policies from more than two decades ago. And those policies emphasize only one side of the equation, and that’s enforcement. But we will not have sustainable success in reducing gun violence unless we emphasize both enforcement and non-enforcement options, including supports and services for those at the highest risk of violence.

David Kennedy: Operation LeGend is about distraction and a way to paint the left as irresponsible about public safety. The federal role in addressing violent crime at a city level is much smaller than people think. So federal agencies get a lot of attention, but they get a lot of attention out of proportion to their actual impact. When it comes to local violent crime, almost everything that matters happens at the local and county and state levels.

Did Trump actually send more officers to Chicago and other places in 2017, or just threaten to?

Abt: I don’t think he actually did. They did claim to be ramping up gun prosecutions in federal attorneys’ offices. That’s something they did in fact try to put into policy. That’s different from a surge, although it’s related.

Before the Trump administration, did the federal government ever try to send groups of federal officers to cities to improve gun violence investigations?

Abt: Yes. In fact it was tried under Attorney General Holder. But it wasn’t particularly successful. Because at the end of the day, fighting violent crime is a local endeavor, and you need to support the localities rather than trying to replace them with federal agents. Temporarily bringing in a bunch of federal officers who may not be sufficiently trained and don’t know the jurisdiction, don’t know the problems in the jurisdiction, and then having them leave shortly thereafter is not a strategy for sustainable success.

“At the end of the day, fighting violent crime is a local endeavor,” Abt says.

Kennedy: It’s not uncommon for the feds to do surges around violent crime issues. But those impacts never last. It’s absolutely conventional wisdom in crime prevention and policing that those federal initiatives, if they produce anything at all, produce momentary small results and then they go away and things return to normal.

Overall, crime is down in big American cities compared with previous years. But gun violence has risen in some cities during the pandemic. Trump blames this on the protests, but that doesn’t seem right. What’s causing this increase?

First of all, we should just be upfront with the fact that nobody knows for sure why gun violence is spiking. But we do have some plausible explanations for it. The pandemic has placed the individuals who are the highest risk of violence under great pressure, because the coronavirus is disproportionately affecting the people who are disproportionately affected by violence. In addition, the institutions that we rely on to respond to increasing violence—hospitals, EMTs, community-based outreach, and police—are all exhausted by responding to the pandemic.

“The pandemic has placed the individuals who are the highest risk of violence under great pressure.”

And then on top of all of that, you have the unrest following the tragic death of George Floyd. There we see a real connection between police violence and community violence, in that police violence—excessive and deadly force used disproportionately against poor people of color—triggers massive distrust in those communities toward police and the criminal justice system. And when people don’t believe in the criminal justice system, they don’t use it, and rates of violence start to climb.

In addition, in certain cities we are seeing sudden and arbitrary pullbacks in policing activity. So you had the “blue flu” in Atlanta, for example. The key thing to understand is that it’s the sudden and unplanned aspect of these pullbacks that causes the violence; for instance, in New York City until very recently, they were gradually reducing their reliance on stop-and-frisk tactics, month after month and year after year, and if anything they were doing better at reducing violent crime. So it’s not that it’s a simple question of more policing or less policing. If you’re depending on policing and you suddenly pull that policing back without any preparation, you are going to see violence rise.

Kennedy: We were seeing before the protests big spikes in homicides and gun violence in a lot of places around the country, including Republican-led cities, and there had been reason to hope social distancing would calm down that dynamic, and it appears it was the other way around, and that things like schools being closed and bars and restaurants being closed meant that, for example, if you were after somebody, they actually got easier to find.

The violent spikes these cities are experiencing are not from protesters. That’s not driving the homicides. What is absolutely driving the violence, driving the body count, is the legitimacy crisis around policing right now.  We know scientifically that when police take these legitimacy hits, violence gets worse. The community withdraws further from the police, stops working with the police. That small subset of people at high risk of shooting or being shot gets more vulnerable. A small subset gets emboldened. They know the community is not going to call the police. They go out to settle scores. Other people get more on edge and stop leaving their guns at home; the violence spirals. The federal law enforcement presence has no overlap with that. What it does have is the capacity to further delegitimize local police, local criminal justice, and make that problem even worse. So the administration is taking steps that are likely to make that core violence problem even worse.

Can the Trump administration force cities to cooperate with Operation LeGend if local officials don’t want the help of federal officials?

Am I understanding correctly that there are already federal officers in some of these cities that are assisting with gun violence investigations?

Abt: Right. There’s always collaboration in federal and state law enforcement, and this surge would just temporarily increase it. But these temporary surges really have no evidence of effectiveness. In fact, local law enforcement don’t really want them: They don’t need a bunch of people who don’t know the jurisdiction, who don’t have relationships on the ground, come in and take a bunch of time to get briefed up, and then as soon as they starting working, they leave. It’s a massive distraction.

But notice the distinction: When you have federal agents and federal prosecutors who are permanently in that jurisdiction, who have the relationships, who are engaged with the community, who are there for the long term, then they can be and are helpful. But this idea that you can just throw a bunch of feds at the problem is not likely to work. And to me, when you try something repeatedly that hasn’t worked, that suggests your object is not policy, but politics.