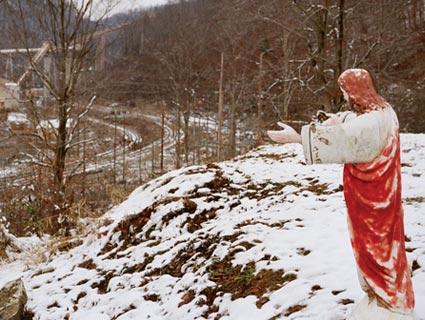 Read more: Kevin Drum on how screwing unions screws the middle class, and 11 charts that explain everything that’s wrong with America.

From a chair on the porch of her home in a hollow deep in the Appalachians, Lora can see the top of Montcoal Mountain being blasted off. The explosions a mile and a half away ruffle her curtains, rattle family photos in her living room, and may be why her walls are laced with cracks. A fine gray dust settles on the steps as fast as she can sweep it off. The noise and “fly rock” raining down have forced her daughter and dozens of neighbors to sell their houses and move away. Lora worries she’ll be next. “I wouldn’t be satisfied with another place,” she says, sitting and chain-smoking Pall Malls. “I raised my kids here. Where would a person go?”

But fighting isn’t an option for Lora, who asked me not to use her real name for fear of repercussions: The mining operations that are destroying the land also employ her son and son-in-law—good jobs, the only real ones around. “It’s the way of life here; there’s nothing else,” says the 54-year-old grandmother. Like many West Virginia coal towns that have shifted from underground mining to far more destructive mountaintop-removal mining, this hamlet, known as Twilight, is now in the business of burying itself alive.

Many blame Twilight’s slow demise on Massey Energy, the state’s second largest coal producer (PDF)—and its most controversial. Massey, which merged with Alpha Natural Resources earlier this year, has racked up more health and safety violations in the past decade than any coal outfit in America. In 1997, it opened a surface strip mine near Twilight that now produces 5 million tons of coal annually, all of it dug up and hauled off by about 350 non-union workers (PDF). Many families that weren’t lucky enough to land jobs on the strip have left. The area’s population has fallen from more than 500 in 1990 to less than 250 today. “With mountaintop removal, they can get the coal easier and quicker with less people,” Frankie Mooney, a retired third-generation miner, told me. “People can say what they want to, but there’s no security in coal mining no more.”

Small-scale mining began in central Appalachia in the early 1800s, and by the end of the century, coal had become a major industry. The Twilight area’s first coal mine opened in the 1940s. For a while, money from the mines seemed to coat the town as easily as the black dust that blew off the coal trains. Due in part to the efforts of the fiery turn-of-the-century labor organizer Mary Harris “Mother” Jones, the roughly 1,000 union workers who toiled underground during the height of the mining boom of the late ’70s enjoyed some of the best benefits in the country. At one time, the Twilight area boasted two grocery stores, a company store called the Robin Hood, a movie theater, and a mine-sponsored softball league.

Due in part to Mary Harris “Mother” Jones, the roughly 1,000 union workers who toiled underground during the mining boom enjoyed some of the best benefits in the country. But that’s gone now.

That’s all gone now. Lora can’t even buy a loaf of bread in Twilight anymore. The stores are gone, along with all four of Twilight’s underground mines, which started shutting down in the mid-’80s. Massey’s mountaintop mine there, the largest east of the Mississippi, has consumed the only road leading to the neighboring valley, turning a 15-minute drive into an hour-long trek. Traditionally, locals chose to be buried on the mountaintops, as the Native Americans had before them, so they might be laid to rest as close to God as they could get. The old cemeteries are now green islands amid rocky fields of gray, inaccessible without a mining-company escort. Lora’s friend, a 75-year-old woman who resembles Betty White (I’ll call her Opal), says she denied her husband’s dying wish to be buried up there—how would she ever visit him?

The strip mines have also buried the trout streams in rubble, polluted the water with toxic selenium, and filled the air with silica dust. All told, 501 mountaintops, more than 1,800 square miles of land, and 2,000 miles of streams across Appalachia have been affected. Health studies (PDFs) have found higher lung cancer rates among men and women in parts of central Appalachia with coal mines. Virginia Gillespie, who runs the Twilight post office, told me that there’d been a spate of lung cancer deaths in the past year: “There was five people alone—that’s just within hollering distance from this post office.”

Yet Lora says she’d never want her son to work in one of Massey’s notoriously dangerous underground mines, where 31 men died last year. Local kids learn in school that strip mines are safe and that reclamation projects can leave the mountains better off than they were before their tops were blown up. “I don’t think we have to worry,” Opal says. “When they get finished with these hills, they’re gonna be back.”

If the mountains ever turn green again, however, nobody may be around to see them. Massey has already coaxed or pressured most of the 100 residents of nearby Lindytown into selling out so the company can expand its operations. “They can’t force me to move,” 85-year-old native Lawrence Richmond, the town’s last holdout, told the Coal Valley News several months before his death last year. His tidy yellow home is one of the last ones standing in Lindytown—even the nearby church where his grandfather once preached has been bulldozed.*

“They are going so far in destruction of the properties up in here, it’s just unreal,” says Mooney, the retired miner. For several years, he’s complained to state inspectors about dust so thick that he had to wipe off his windshield before he could drive. He was offered $775,000 for his mineral rights, land, and log home, the nicest in town; he thinks the buyer was working for a coal company. In December, he took a lower offer from the Ohio Valley Environmental Coalition, giving the anti-coal group standing to sue Massey over environmental and health concerns. (Mooney died in January.) The sale has divided Twilight. To Lora, the “treehuggers” are just people who “don’t do nothing except trying to shut down what’s a way of life here.”

Of course, Massey’s doing a perfectly good job of that already. It’s largely staffed its mine with outsiders who are unlikely to unionize or complain about safety problems, and the few native sons still working there aren’t about to protest. “These men are terrified,” Opal explains, gazing up at the mines from her friend’s porch. “There ain’t no way to go up against them big companies.”

* Correction: The print version of this article said that Richmond’s house had been bulldozed.