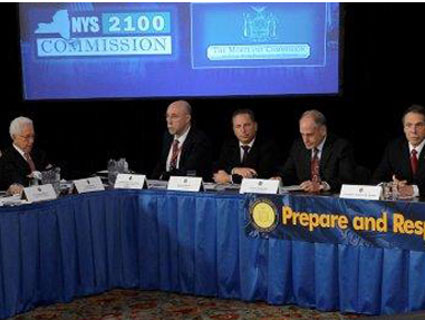 This story first appeared on the The Atlantic Cities and is reproduced here as part of the Climate Desk collaboration.

From a behavioral perspective, the hardest thing about adapting to the slow process of climate change is creating a sense of urgency. After a close call with Hurricane Irene a couple years back, and a horrible clash with Hurricane Sandy this past fall, New York is beginning to accept the fact that when it comes to weather patterns along its coasts, there’s a terrifying new normal.

Late last week, just two months after Sandy, a state commission released a massive, 200-plus page blueprint on ways to develop resilience in the face of tomorrow’s environment [PDF]. The NYS 2100 Commission—one of several formed by Governor Andrew Cuomo following Sandy—evaluated the state’s critical infrastructure systems and recommended a gradient of goals, from broad to specific, to reduce their vulnerability.

“There is no doubt that building resilience will require investment, but it will also reduce the economic damage and costs of responding to future storms and events, while improving the everyday operations of our critical systems,” write commission co-chairs Judith Rodin of the Rockefeller Foundation and Felix Rohatyn of Lazard in a foreword.

Ideas produced by this model of resiliency cross a number of infrastructure sectors. Some of the broadest ones touch on the insurance and financial sides of resilience. The commission recommends considering ways to pre-fund disaster recovery, for instance, and also the establishment of an infrastructure bank to coordinate and maximize the investments bound to occur in coming years. A general strengthening of the energy grid, especially securing critical systems, is also suggested.

Many of the recommendations specific to New York City fall in the category of land use. The former includes a host of “green infrastructure” initiatives. These take the form of restoring wetlands and oyster reefs in New York Harbor to break up storm surges, or building an archipelago of small islands in front of the harbor, or dumping old subway cars into the sea to form barrier reefs. (As Sarah Goodyear recently pointed out, even green infrastructure is subject to destruction during major storms.) The commission also suggests a comprehensive assessment of a true storm surge barrier on the harbor, estimating the cost between $7 billion and $29 billion.

Even more city-relevant recommendations focus on solidifying the transportation network (which, it should be said, recovered rather well post-Sandy). The commission encourages measures to limit subway flooding, including waterproof roll-down doors at the foot of subway entrances, mechanical vent closures, and inflatable plugs or bladders for the tunnels themselves. It also suggests a general increase in pump capacity and upgrades of infrastructure subject to seawater erosion. More resilient airports—featuring raised runways, better drainage valves, and more emergency fuel storage—also get mentioned.

The biggest transportation suggestion is what the commission calls “redundancy.” Here the commission’s idea is to create so many overlapping routes into and out of the city that if one fails the others can continue to function. Recommendations include expanded intercity rail networks, more surface transit, additional ferry service, and continued support of non-motorized travel modes like biking.

There are a few particular projects endorsed by the commission to meet this redundancy goal. Some are the usual suspects: a new transit tunnel across the Hudson, expanded Long Island Railroad service, and Metro North commuter rail access at Penn Station on the west side (instead of only Grand Central on the east). The most novel idea is the establishment of a vast bus rapid transit network—beginning perhaps with a “BRT task force” created this year—to complement the rail system and fortify inter-borough corridors.

The New York Times, reporting last week on a draft of the report that seems similar to the final version, wondered if the recommendations weren’t too sprawling and vague. The Times also pointed out that a “disaster preparedness commission” already exists under state law, making the present one rather superfluous. Last, the paper notes that commissions and reports mean little if they aren’t followed by political action.

All these critiques of the NYS 2100 Commission are well taken. Still we shouldn’t forget that climate adaptation policy remains pretty uncharted territory. These problems are very new, the solutions largely untested. At some point quite soon New York (and other vulnerable cities) will have to select and implement adaptation measures. For now it’s at least a partial sign of urgency that we’re building consensus around the best ones.