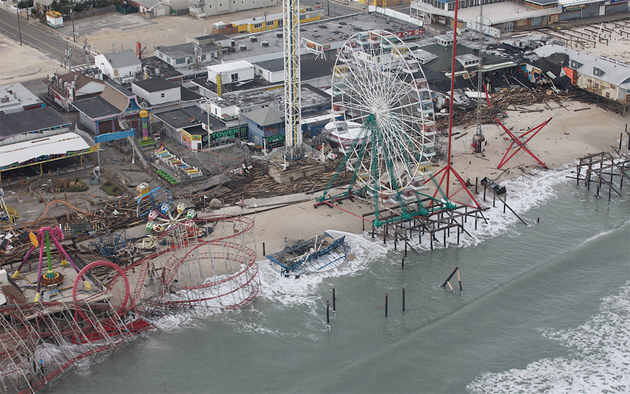 Contractors with the Army Corps of Engineers last month finished pumping more than 1.8 million cubic yards of sand onto the beach in Ocean City, New Jersey, which had been damaged by Hurricane Sandy.

Using a combination of Sandy aid and funds already earmarked for adding sand to beaches, the federal government picked up $14 million of the roughly $18 million tab. And it’s not the first time Washington has paid to dredge up sand and pump it onto Ocean City’s beaches.

The federal government also helped pay to restore Ocean City’s beaches in 2010, according to data compiled by Western Carolina University’s Program for the Study of Developed Shorelines. And in 2004. And in 2000.

In total, Washington has spent at least $40 million on nine separate efforts to help restore the city’s beaches over the last two decades, according to the data, adding more than 12 million cubic yards of sand.

Beaches are essential to the economies of places like Ocean City. But critics say paying to restore beaches year after year is one of a number of ways the government subsidizes less-than-smart development and rebuilding along coasts that are increasingly vulnerable to flooding and hurricane damage, even as it has discouraged coastal development in other ways.

We’ve taken a closer look at four of these subsidies.

The Stafford Act: When it comes to coastal subsidies, “the Stafford Act—which allows the president to declare a disaster and pour federal aid into individual states and individual counties—is maybe the biggest problem,” said Robert S. Young, a geology professor at Western Carolina University who directs the Program for the Study of Developed Shorelines.

The law, passed in 1988, commits the federal government to paying 75 percent of the cost of rebuilding roads, bridges, and other infrastructure damaged in a disaster.

But the infrastructure is typically rebuilt in the same way it existed before a storm, Young said. There’s no requirement that the bridges or anything else be rebuilt to withstand the rising seas.

The money often goes to well-off beachfront communities. The classic example, Young said, is Dauphin Island, Ala., a town popular with vacation homeowners from Atlanta and New Orleans. As the New York Times reported last year, the federal government has spent at least $80 million rebuilding the island’s infrastructure since 1979. That’s more than $60,000 on each of the community’s 1,300 residents, adjusted for inflation.

National Flood Insurance Program: The federal government’s flood insurance program, created in 1968, offers premiums below market rates for many homeowners. The Property Casualty Insurers Association of America estimated in 2011 the average policyholder paid just half of the “true market-risk rate.”

“The result of that is that there is more development near water than there would be under a totally private market,” said Eli Lehrer, the president of the R Street Institute, a conservative Washington think tank. (The institute is part of a coalition of environmental groups and budget hawks called SmarterSafer.org, which opposes such subsidies.)

The premiums the flood insurance program took in covered what it paid out in claims for a number of years, but the program fell $18 billion into debt after Hurricane Katrina hit in 2005. Congress voted in January to let it borrow an additional $9.7 billion to help pay claims from Hurricane Sandy, but the program has no way to pay off its debt.

Congress passed legislation last year raising premiums on vacation homes and properties that have flooded repeatedly, but it may be years before the premiums those homeowners pay reflect the risk.

Many of the flood maps drawn by the Federal Emergency Management Agency, which runs the program, are decades out of date, and that may also subsidize the cost of living in flood-prone areas. When FEMA released new preliminary maps for New York City on Monday, replacing ones from 1983, the number of structures in flood zones doubled.

Beach Nourishment: The federal government has been paying to pump sand onto eroding beaches—commonly known as beach nourishment—for decades.

Keeping beaches from washing away can sustain tourism and the local economy in beachfront towns, said Kate Gooderham, an executive director of the American Shore and Beach Preservation Association, a nonprofit group. (The association spent $80,000 lobbying Congress last year, according to the Center for Responsive Politics.) Nourishing a beach, she said, is no different than maintaining “airports, train stations, anything else.”

But the only beaches that erode and need to be nourished are ones with homes and other buildings behind them, Young said. Beaches in Delaware and Virginia that have dodged development haven’t vanished despite rapid erosion—they just move back with the shoreline.

Young and other scientists say that beach nourishment can end up encouraging development in areas vulnerable to flooding and hurricanes. In the 1960s, for instance, the Army Corps of Engineers pumped sand onto Carolina Beach, North Carolina.

“After they nourished the beach, all of a sudden high-rises appeared and the density of development increased tremendously in just a few years,” said Orrin H. Pilkey, an emeritus professor of geology at Duke University and a longtime critic of beach nourishment.

Over the last decade, the Army Corps of Engineers has spent between $125 million and $150 million a year on beach nourishment, said Andrew S. Coburn, associate director of the Program of the Study of Developed Shorelines. (The program’s website has an interactive map showing decades’ worth of nourishment projects in 20 states.)

Communities such as Ocean City have signed agreements with Washington that commit the federal government to help pay to restore their beaches every few years. Coburn estimated that FEMA has spent an additional $25 million to $30 million on beach nourishment a year. (The Army Corps of Engineers did not respond to our requests for comment. FEMA was unable to immediately confirm Coburn’s estimate.)

But the money for beach nourishment included in the Sandy relief bill passed in January will blow those numbers away.

Coburn estimated that the $50.7 billion bill contains $3.5 billion for pumping sand onto beaches. “That is more money than has been spent on nourishment from every source that we can identify from the history of nourishing in the United States,” he said.

Of course, there’s no question that communities like Ocean City would be hurt if the federal government cut back on beach nourishment, unless state governments pick up the tab. “We’re a resort, seashore town,” said Michael Allegretto, Ocean City’s City Council president. “If we didn’t have our beach, the town would be in trouble.”

Casualty Loss Deduction: Many beachfront homes are investment properties owned by individuals or companies that rent them out. The Internal Revenue Service allows owners to deduct losses that aren’t covered by FEMA or their insurance. While the deduction can ease the burden on taxpayers who have suffered storm damage, it can also function as subsidy for building or rebuilding homes that have been repeatedly damaged.

“When a storm destroys that house, if the folks don’t get all the money back in insurance, they can write those losses off on their taxes,” Young said. “And they can amortize those losses over a number of years.”