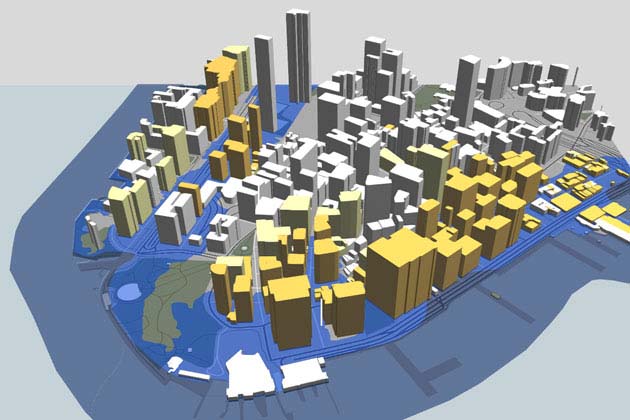 With warmer weather arriving, long-shuttered train lines reopening and a revamped boardwalk, people are flocking back to the beachfront on the Rockaways in Queens. And they’re not just coming to lie on the sand. They’re here to buy property on the 11-mile-long peninsula ravaged by Superstorm Sandy seven months ago.

“All of a sudden, everyone wants to be here,” said Annette Farina, a broker and owner of Belle Harbor Realty in Rockaway Park, N.Y.

But while Sandy’s water has long receded and the bulldozers have left, a residual effect for homeowners along the city’s coastline still lurks quietly beneath the surface. It comes in the form of a July 2012 law called the Biggert-Waters Act, which will end subsidized rates for property owners who are remapped into more severe flood zones, increasing their flood insurance premiums 20 percent a year until they reach market rates, and will apply those higher rates for newly purchased property.

The potential increases, which proponents say are necessary to sustain the National Flood Insurance Program, are not widely understood by residents, and may be catching them unprepared.

Flood insurance is guaranteed by the federal government, and most property owners in flood-prone areas are required to carry it. The rates are set according to a property’s location on a map drawn by the Federal Emergency Management Agency. FEMA’s maps are based on complex storm modeling and are the agency’s estimates of each area’s chance of flooding.

On Monday, FEMA released new “preliminary” flood insurance maps for New York City, which replaced “advisory” maps rushed out in the days after Sandy devastated the area. Neither the advisory nor preliminary maps incorporate data from Sandy, but according to FEMA Mitigation Branch Director Bill McDonnell, they factor in prior storms and theoretical “Sandy-like” storms. The new maps double the number of city structures in flood zones to more than 67,000 over the last map update in 2007, which was based on 1983 data.

The mapping process now enters a public comment period, in which property owners and others will have the opportunity to appeal before the maps are finalized, which FEMA estimates will happen sometime in 2015.

The FEMA maps split the most at-risk areas into “V-Zones,” or “velocity zones,” and “A-Zones.” V-Zones risk waves higher than three feet and thus carry the highest insurance rates. A-Zones, the second most at-risk areas, also have high rates, albeit a bit lower. New York City’s A-Zones have grown dramatically since the 2007 map revision, so Biggert-Waters could mean the difference between thousands of homeowners’ making mortgage payments and going into default.

An analysis of Biggert-Waters’ effects by the Extension Disaster Education Network estimates that a typical property built in a flood zone at four feet below the expected flood level, which now carries a $1,410 yearly premium, would see premiums rise to $9,500 within five years.

The changes would be felt well beyond New York. Michael Hecht, president and chief executive of the Greater New Orleans Inc. Regional Economic Alliance estimated that the premium on a $350,000 primary residence in a Louisiana A-Zone that had never flooded could rise from $633 per year to $28,000 per year.

Concerned about the effect of changes mandated by Biggert-Waters, local and federal officials have introduced an array of measures to delay or blunt their effects.

Yesterday, New York City Mayor Michael Bloomberg announced an ambitious $20 billion multi-pronged plan to protect the city through a combination of flood walls and levees, as well as grants and loans for rebuilding. Bloomberg also introduced a proposal to preempt the effects of Biggert-Waters by letting buildings that can’t be elevated escape higher premiums if they use other methods to fortify against floods. However, the plan faces at least a $4.5 billion funding gap, and Bloomberg offered no clear timeline or the project except to say it would last far beyond his term as mayor.

“It’s up to you to hold the next administration accountable for getting it done,” Bloomberg told reporters yesterday.

Last Tuesday, the US House of Representatives passed an amendment proposed by Rep. Bill Cassidy, R-La., to reinstate the federal flood insurance premium subsidies ended by Biggert-Waters. The idea faces an uncertain future in the Senate, where Louisiana Democrat Mary Landrieu proposed an amendment to the Farm Bill restoring the subsidies, but the amendment was not voted on.

Landrieu also has introduced a standalone bill called the Strengthen, Modernize and Reform the National Flood Insurance Program (SMART NFIP) Act that would delay premium increases, continue subsidized rates for homes that are sold, and allow the rebuilding of community facilities in V-Zones if they are destroyed in disasters.

In New Orleans, Hecht has been fighting for the amendment. He says that if the law isn’t amended, and if new maps of areas like the Rockaways, Red Hook and Lower Manhattan are similar to the FEMA maps being released for coastal Louisiana, premiums could rise so high that homes would be effectively uninsurable.

“You’re going to be taking people and business owners who have done nothing wrong, who have followed all applicable codes, have kept their insurance up, have paid their taxes, who are suddenly going to find their properties not viable anymore,” Hecht said. “To me, that almost amounts to an illegal taking where somebody stands to lose their most important asset.”

Jolene Festa owns a brownstone in Red Hook, a coastal neighborhood in Brooklyn with 19th century cobblestone streets and beautiful views of New York’s harbor. When Sandy hit, water inundated her basement and rose a foot into her apartment, which is above grade. She currently pays about $2,000 a year for flood insurance, and says she hasn’t heard anything about rising rates, other than what’s been reported on the radio.

“Unless they’re setting us up for failure, we’re rebuilding as was,” Festa said. “We’re not being told anything.”

According to the new preliminary maps, Festa’s building is in an A-Zone, with a required flood elevation of 11 feet. She says she has a realtor watching the house just in case something forces her to sell, and her architect told her there aren’t any building code changes at this time.

That’s probably because homeowners are not required to elevate unless the structure is “substantially damaged,” meaning over 50 percent of it is damaged, according to FEMA’s McDonnell.

“Either elevate,” McDonnell warned, “or understand that if they’re negatively rated by NFIP, in the future their flood insurance could be significantly higher.”

Owners whose property wasn’t “substantially” damaged could actually be in a worse position as they rebuild than those with more damage, said Jessica Grannis, a staff attorney and adjunct professor at the Georgetown Climate Center studying climate policy. Those with significant damage can collect both insurance payouts and individual assistance from FEMA, which may be enough to allow them to elevate their structures, Grannis said.

Homes with less than 50 percent damage are usually repaired under the required flood elevations, which means they may face higher insurance rates.

According to the real estate website Zillow, Red Hook real estate listing prices have risen 103 percent in the past year, but Festa believes if the new rates go forward it could have a huge effect on the neighborhood.

“Two things end up happening in these situations,” she said. “Rich people buy buildings and raise them up, or it goes back to being abandoned.”

Robin Shapiro, a Rockaway realtor, says she only knows of one house in her neighborhood that’s elevated. According to the preliminary maps, nearly all of the Belle Harbor and Neponsit sections of the Rockaway peninsula are in A- or V-Zones, with required flood elevations of up to 11 feet. In spite of that, she says people still want to move to the beach.

“Even though the rates just inched up, they’re still pretty low,” she said. “People have short memories.”

“A lot of people are still trying to rebuild, and they still don’t understand that even though they’re rebuilding, they may not be able to afford it when they get the flood insurance bills,” said George Kasimos, of Tom’s River, N.J., who runs a group called Stop FEMA Now to fight the new flood maps. “A lot of people still don’t know.”

Kasimos started rebuilding his house a week after Sandy, and stopped when one of his neighbors came by and told him his flood insurance would go up to $30,000 a year if he didn’t elevate his house. Placed in what he called the “dreaded V-Zone,” Kasimos would be required to raise his house 12 feet to avoid the high rates, something he says he can’t afford to do.

Some experts are resigned to the rates hikes mandated by Biggert-Waters if they can help preserve the National Flood Insurance Program.

While Hecht agrees that the flood insurance program has to be adjusted, he says it has to be done gradually. He says the legislation proposed by Landrieu and Cassidy would “hit the pause button” to give lawmakers time to fix Biggert-Waters and to give FEMA time to redo the maps “in a more holistic fashion.” He would like to see the system keep grandfathered rates, but use market rates for those buying new properties or for those with severe repetitive loss.

A resolution could be years off, but Hecht says it’s not time to start panicking.

“I have to believe this problem is going to get solved for Louisiana and for all of America,” he said. “If it were not to be solved, the implication is just too great. It would mean eviscerating coastal economies.”