This story and video first appeared on The Atlantic website and is reproduced here as part of the Climate Desk collaboration.

The prices of solar cells are falling rapidly, and will keep doing so for the next few years. The big questions revolve around the rate of the price declines. And the panels themselves aren’t the only place where cost reductions will be found. America has very high “soft costs”—installation, permitting, marketing etc. Whittling down these expenses will help, too.

Solar is taking off at a breakneck pace (admittedly from a tiny base). Stephen Lacey at Greentech Media provides the striking figures illustrating the exponential growth of solar photovoltaics (PV) in the past few years:

Even though prices of modules—the solar panel itself—have plummeted in the last few years, a report from the Department of Energy’s Lawrence Berkeley National Laboratory reveals that other costs haven’t been so easy to bring down:

Non-module costs—such as inverters, mounting hardware, and the various non-hardware or “soft” costs—have also fallen over the long-term but have remained relatively flat in recent years. As a result, they now represent a sizable fraction of the total installed price of PV systems.

So, Greentech Media analyst Shyam Mehta cautions that panels getting cheaper actually might not bring down total prices by much:

[There is] the issue of exactly how meaningful a reduction of around $0.20 per watt in module prices (from $0.62 per watt at the end of 2012 to $0.42 per watt in 2017) is in the overall context of [solar] economics. Assuming an installed cost of $2.25 per watt for a utility-scale system in the U.S. right now, our base-case forecast implies a system cost reduction of less than 10 percent…It’s not exactly a game-changer.

David Roberts at Grist suggests that reducing the soft costs that are staying stubbornly high in the United States will be a key part of driving solar forward:

When it comes to accelerating the wide deployment and falling costs of clean energy, market innovation is every bit as important as technological innovation. Even if PV technology remains static (which of course won’t happen), enormous savings could be had simply through market building—helping markets with high soft costs match the performance of those with low soft costs.

Much of the soft costs holding back solar are related to regulation. In the New York Times, David Crane and Robert F. Kennedy criticize the amount of red tape in the United States and advise America to learn something from Germany’s solar success:

In Germany, where sensible federal rules have fast-tracked and streamlined the permit process, the costs are considerably lower. It can take as little as eight days to license and install a solar system on a house in Germany. In the United States, depending on your state, the average ranges from 120 to 180 days.

John Farrell, at the Institute for Local Self-Reliance, considers the size of this disparity all the more reason to be convinced that US solar will keep getting cheaper: 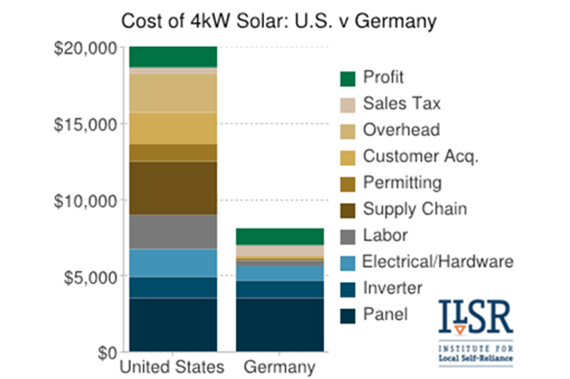 If solar prices do continue to fall quickly, the technology will come ever closer to its moment of glory: (hazily defined, so-called) grid parity. This is when solar can really be called “cheap”—grid parity comes when solar is less expensive than fossil fuels, even without subsidies. (That fossil fuels receive several types of subsidies, in particular a free pass for carbon dioxide emissions remains a sore spot for solar advocates in the debate about subsidies.) Ambrose Evans-Pritchard at the Telegraph describes the steady march towards this tipping point:

The US Energy Department expects the cost of solar power to fall by 75pc between 2010 and 2020. By then average costs will have dropped to the $1 per watt for big solar farms, $1.25 for offices and $1.50 for homes, achieving the Holy Grail of grid parity with new coal and gas plants without further need for subsidies…The race is on: somebody, somewhere, is soon going to deliver grid parity with a clarity that silences all critics. Then we can all forget about subsidies for solar, and tax it instead, a future cash cow.

The belief that solar costs will keep falling is by no means universal, but the potential prospect has many energy analysts excited. This is not the 1970s with its brief boom in solar hot water and heating tech. Solar electricity prices have declined dramatically, and could be genuinely cheap in sunny climates in the not-too-distant future.

*For a primer on the basic science behind solar technology, check out the US Energy Information Administration’s explainer on the topic. And here’s a neat interactive map forecasting over the next decade different scenarios for grid parity across US states.