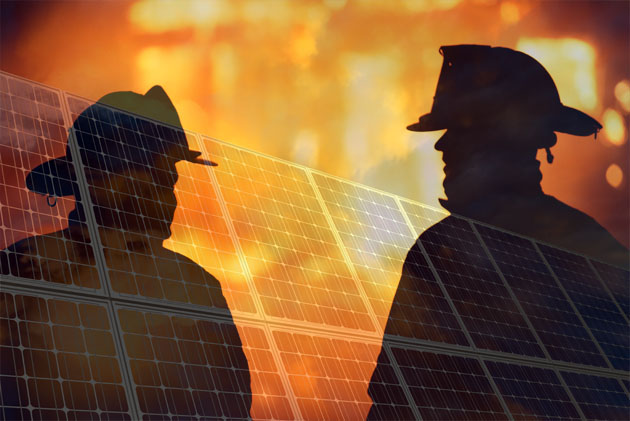 A 300,000 square foot refrigerated warehouse in Delanco, New Jersey, burned down last week, and the local fire chief says solar panels are partly to blame. No, the 700 solar panels on top of the Dietz & Watson warehouse didn’t cause the fire, but their presence did dissuade Delanco Fire Chief Ron Holt from putting his team on the roof. “With all that power and energy up there, I can’t jeopardize a guy’s life for that,” Holt told NBC Philadelphia. The only thing firefighters fear more than fire is solar.

So long as a solar panel is getting sunlight, it’s impossible to turn off. “During daylight, there can be enough voltage and current to injure or even kill a firefighter who comes in contact with the energized conductors,” Matthew Paiss, a fire engineer with the San Jose Fire Department, wrote in a handy guide for firefighters. The Dietz & Watson warehouse fire started when the sun was out. By the time the sun went down, the fire was beyond control. The warehouse burned for 29 hours.

As Paiss explained in his essay on solar panels and firefighting, roof access is crucial for firefighters:

In a house fire, superheated smoke and gases (which can exceed 1,200°F) rise to the ceiling and then bank down back to the floor. Just one lungful of this smoke can kill. Cutting a hole in the highest point of the room allows the superheated gases and fire to rise out of the building, rapidly improving visibility as well as the survivability of the structure and those trapped inside. This also allows firefighters on the hose line to advance inside to locate the seat of the fire and any victims. This “vertical ventilation” has saved many lives and valuable property—besides actual rescue, this is one of a firefighter’s primary responsibilities.

But the presence of rooftop-mounted PV arrays has made cutting through a roof more challenging. In the past, the fire service had plenty of room to ventilate where it is most effective—directly above the fire. With PV arrays now covering large areas of roofs, firefighters are limited in where they can cut and where they can exit the roof. Since the PV modules cannot be cut through, and moving them is time-consuming and potentially dangerous, rooftop PV systems pose some risks—mainly shock and trip hazards.

The importance of ventilating a burning building is likely why Delanco’s deputy fire chief told Reuters that there might’ve been “a different outcome” if his firefighters had been able to safely access the roof. Oddly enough, I wasn’t able to actually find a story about firefighters getting electrocuted, or dying from electrocution, while navigating roof-top solar arrays. A 2010 story from Oregon suggested no one actually knows how often it happens:

But documented U.S. cases of firefighters being electrocuted by photovoltaic systems while fighting fires are few and far between, according to Paiss, who has never had it happen in his jurisdiction. Lt. Allen Oswalt of the Portland Fire Bureau said despite his city having an excess of homes with photovoltaic systems, he is not aware of any incidents within his bureau where electrocution by photovoltaics has been an issue.

Nevertheless, a lot of firefighters have seemingly made up their minds about dealing with solar. An expert on fire forensics told Reuters that he’s heard from firefighters who, when faced with a blaze in a solar panel-equipped building, will turn their attention to “defensive” firefighting, which means making sure non-burning buildings stay that way.

The solar industry is well aware of the issue.

“We recognize that we need to do a better job as an industry educating first responders, especially firefighters, about solar panels,” says Ken Johnson, vice president for communications of the Solar Energy Industries Association.

“In this particular case this was a nicely designed system,” Johnson told me of the solar arrays on the Dietz & Watson warehouse. “It operated flawlessly for four years. There were wide walkways, there were areas where you could’ve vented the roof. Obviously [the fire department] would’ve liked more areas.”

At the moment, firefighters navigating solar-equipped buildings can two do things to protect themselves. While on the roof, they can cover solar arrays with heavy tarps, depriving them of light. Inside the building, they can disconnect inverters. Even then, they have to be careful where they sink their axes, Paiss advises. “It is important for the crews inside to be careful when opening holes in the ceiling, as they may contact the conduit from the array with their tools.” Regulations are also part of the equation. California requires clear labeling of solar energy at a building’s main service disconnect (this is basically like a breaker switch, except it shuts off everything), and pending legislation in New Jersey would require buildings that use solar to post signs saying as much for the benefit of firefighters.

While Johnson says that new technology will make it easier to isolate and disable solar panels in the event of emergency, the industry’s best bet right now is to educate firefighters.