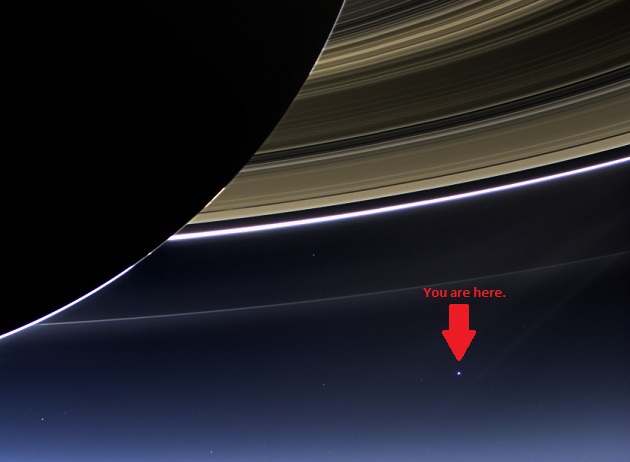 Earth as glimpsed past Saturn in one section of the stunning "The Day the Earth Smiled" image taken by the Cassini spacecraft.<a href="http://en.wikipedia.org/wiki/File:The_Day_The_Earth_Smiled_-_Preview.jpg">NASA/JPL/SSI/CICLOPS</a>/Wikimedia Commons

On Valentine’s Day 1990, from more than four billion miles away, the Voyager 1 spacecraft snapped our photo. From that distance, there wasn’t much to see; the resulting shot simply showed several light beams with a tiny speck in one of them. Earth.

But that didn’t stop the late celebrity astronomer Carl Sagan from writing rapturously about the meaning of this image, which he famously dubbed the “Pale Blue Dot.” “To me,” Sagan wrote of the picture, “it underscores our responsibility to deal more kindly with one another and to preserve and cherish the pale blue dot, the only home we’ve ever known.”

Sagan infused the “Pale Blue Dot” with significance, but the truth is that, thanks in part to the difficulty of the shot, it was never a very good image. Enter planetary scientist Carolyn Porco, one of Sagan’s scientific disciples and head of imaging science for the Cassini spacecraft, which is currently in orbit around Saturn and sending us back stunning images on a regular basis. “From day one,” explains Porco on the latest installment of the Inquring Minds podcast (stream above), “I had it in my mind that I wanted to do that picture, only better. I wanted to make it beautiful.”

Last month—appropriately enough, at a celebration for Sagan, dedicating his papers to the Library of Congress—Porco unveiled a new Pale Blue Dot image. Aesthetically, it is everything the original was not.

Above, you can see a small slice of the image, the section that actually contains Earth. The full image, a mosaic of shots taken by Cassini during a choice moment while Saturn blocked the sun, is too massive and exquisitely detailed to display here, but you can click here to open a new window and see it in its full glory. And here is a scaled-down version, in which Earth is not visible at all; but if you could see it, it would be to the lower right of Saturn:

The image is entitled “The Day the Earth Smiled,” because Porco took it upon herself to do something very innovative: Get Earthlings involved in the photo shoot. Our space program hasn’t done that before; rather, a picture of Earth gets taken by some robot somewhere in space, and we hear about it months later.  “I thought, whoa, all of this is such a lost opportunity,” Porco says. “Why don’t we tell people in advance, your picture is going to be taken, and we can turn this into an interplanetary photo session? An interplanetary salute between robot and maker.”

Thus was born “The Day the Earth Smiled”: Earlier this year, people the world over were told well ahead of time that on July 29, they were going to have their picture taken from Saturn. Porco instructed them to go outside at the appointed time and “look up, think about our cosmic place, think about our planet, how unusual it is, how lush and life-giving it is, think about your own existence, think about the magnitude of the accomplishment that this picture-taking session entails. We have a spacecraft at Saturn. We are truly interplanetary explorers. Think about all that, and smile.” 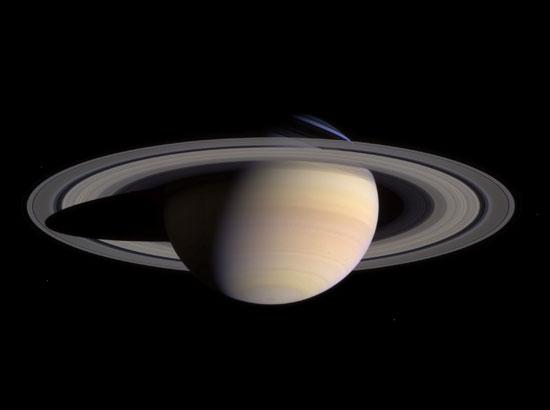 Saturn as glimpsed by Cassini on its first approach on December 17, 2004. NASA/JPL/SSI/CICLOPS

It’s not clear how many people participated, but it appears to have been thousands. And many of those who did seem to have had Saganesque emotional reactions. Porco herself certainly did. “I just felt like, wow, lots of people around the globe right now are feeling exactly the way I’m feeling,” she says. “They’re mindful of our extended senses, a billion miles away.”

The uplifting image comes, after all, at a time when NASA is struggling under budget cuts and, arguably, the stunning achievements of the Cassini mission are far too little celebrated. To show as much, just consider: Is the word “Enceladus” known by most people? Is it a part of everyday conversation? 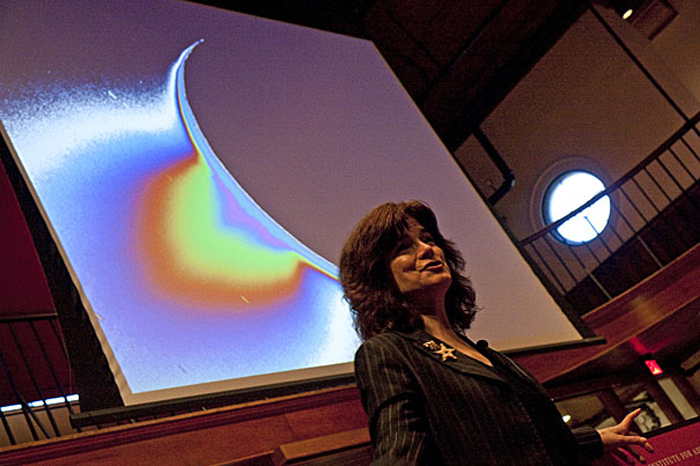 Carolyn Porco lecturing with an image of Saturn’s moon Enceladus, giving off a plume, in the background. CarolynPorco.com.

The answer is no, and that alone is overwhelming proof that our ongoing program of space exploration is grossly under appreciated. For thanks to Cassini, and thanks to Porco and her scientific colleagues, we have reasons to believe that Enceladus—a moon of Saturn—could actually contain some form of life (perhaps microbial in nature).

“The most exciting thing that we have found with Cassini,” says Porco, “is the geological activity, the geysering activity at the south pole of Enceladus.” In a 2006 paper in the journal Science, Porco and her colleagues described the results of Cassini’s imaging of this moon: Geysers erupt regularly from it south pole, catapulting ice into space, some of which makes its way into Saturn’s rings. But where were the geysers coming from? The paper suggested they are “probably venting from subsurface reservoirs of liquid water.” 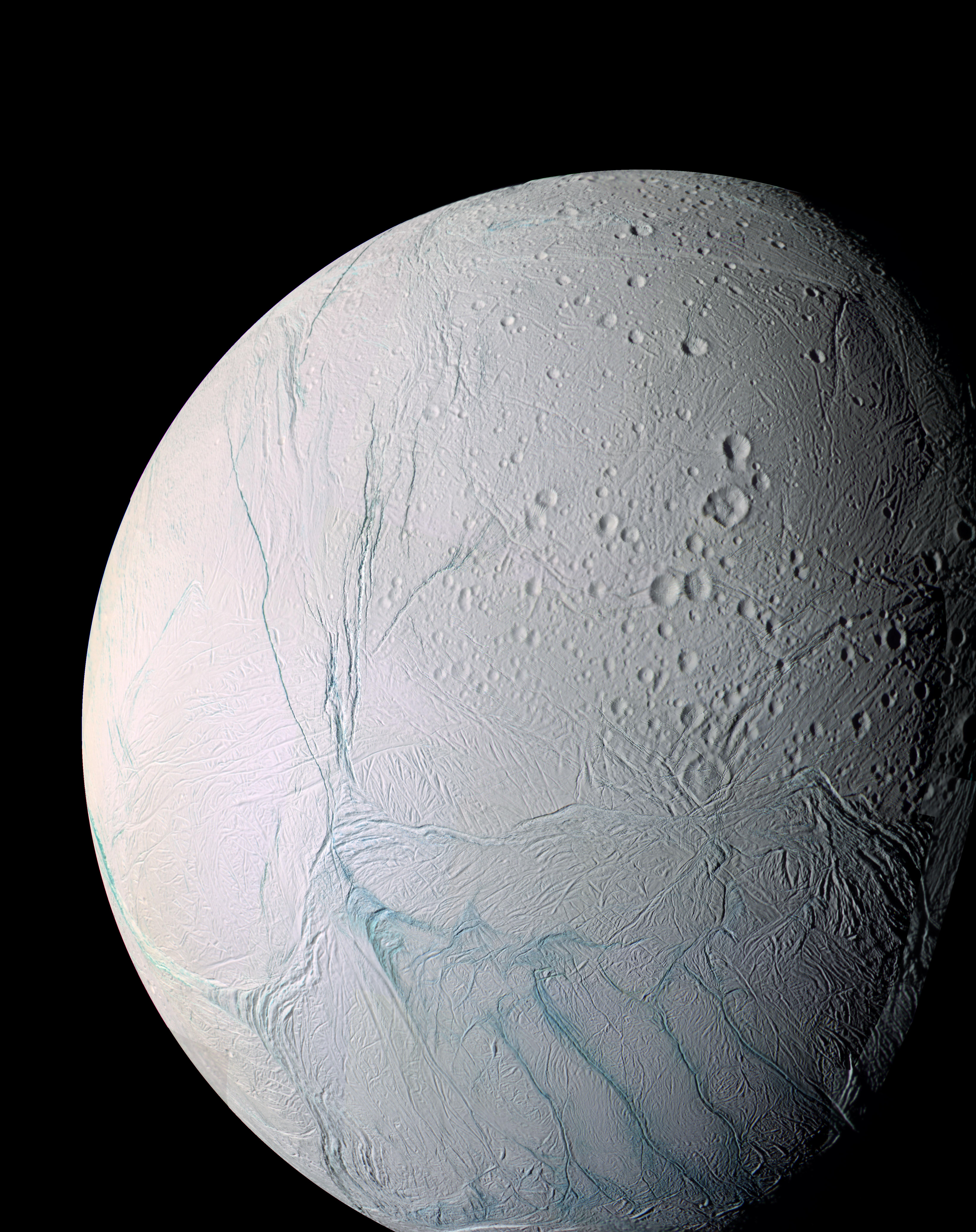 Enceladus, as captured by Cassini on March 9, 2006. The moon’s intriguing south pole is towards the bottom of the image. NASA/JPL/SSI/CICLOPS

Further research on Enceladus’s plumes, via Cassini, has helped to confirm this. “We are confident now,” Porco says, “that those geysers are erupting from a body of liquid water, an ocean or a sea, under the south pole that is salty, and is suffused with organic materials, and biologically available nitrogen. It’s got everything that we have been saying, NASA has been saying for decades now, that we want to get up close and personal with, because it could be an inhabited zone. Not just habitable, it could be inhabited.”

And yet there are no official plans to explore Enceladus more closely at the moment. “The planetary program right now is really under siege with budget cuts and such,” says Porco. Granted, there are brilliant ideas out there, including sending a new craft that might actually be capable of scooping up some of the organic material venting from Enceladus and sending samples back to us. We’d get them seven years later, kind of like interplanetary FedEx. “Isn’t that an exciting idea, to bring a sample of material coming from a moon tucked away deep in the gravity well of Saturn, and bring it back to Earth?” asks Porco. “That’s goosebump inducing.” It is not, however, officially on the agenda.

So yes, Cassini continues to send us stunning images. Here’s one last one, of Saturn’s famed polar “hexagon,” whose mysterious shape is explained by Porco on the podcast (we’ll let you listen to learn about that): 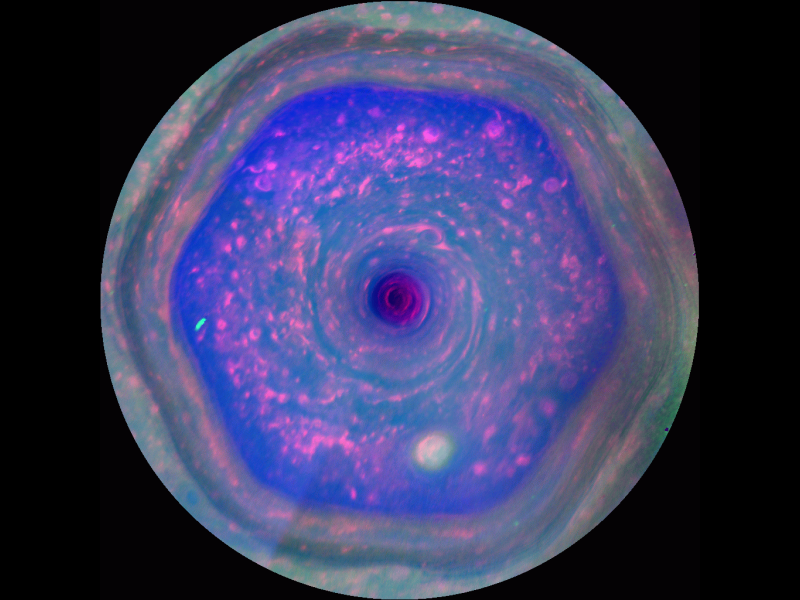 But the question is, beyond the temporary thrill that we get from looking at these pictures, or at images from the Hubble Space Telescope, do we stop and think enough about what they actually signify about us? And do we value them the way that we should?

Carl Sagan had an amazing way of tying space exploration to what really counted. He could take an unimpressive picture, like the original Pale Blue Dot, and infuse it with scads of significance. Porco has the same knack: “The Day the Earth Smiled” is gorgeous, and even more so is what she has to say about it. It turns out that a picture alone is not always enough: Many of us need a guide, an interpreter, to convey the sublime oomph.

Fortunately, even with Sagan gone, we still have a few scientific voices around who can convey the wonder of the cosmos. “I can’t think of a more exciting time in the exploration of the planets than right now,” says Porco. And this time around, if you come along for the ride, there’s a new incentive.

You just might be there when we finally learn just how unusual—or maybe, not so unusual—life itself is, in our solar system and beyond.

This episode of Inquiring Minds, a podcast hosted by best-selling author Chris Mooney and neuroscientist and musician Indre Viskontas, also features a discussion of the psychology of New Years’ Eve: When do New Years’ resolutions to lose weight actually work, and when do they fail? And what does marking time through significant dates (birthdays, anniversaries, and years’ ends) do to the identities that we create for ourselves? Chris and Indre discuss the latest research on both topics.

To catch future shows right when they are released, subscribe to Inquiring Minds via iTunesor RSS. You can also follow the show on Twitter at @inquiringshow and like us on Facebook. Inquiring Minds was also recently singled out as one of the “Best of 2013” shows on iTunes—you can learn more here.