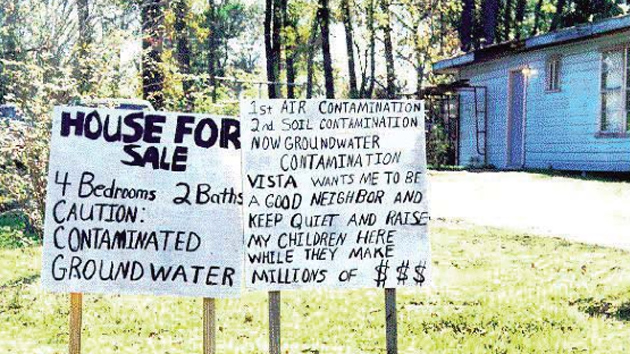 In 1790, a freed slave named Jim Moss found a place to settle down on a bend in the Houston River in the bayous of southwest Louisiana. Although never formally incorporated, the village of Mossville became one of the first settlements of free blacks in the South, predating the formal establishment of Calcasieu Parish by 50 years. But over the last half century, Mossville was surrounded. More than a dozen industrial plants now encircle the community of 500 residents, making it quite possibly the most polluted corner of the most polluted region in one of the most polluted states in the country. Now, a proposal to build the largest chemical plant of its kind in the Western Hemisphere would all but wipe Mossville off the map.

The project, spearheaded by the South African chemical giant SASOL, will cost as much as $21 billion, but stands to benefit from more than $2 billion in incentives (including $115 million in direct funding) from the cash-strapped state budget. It has the backing of Republican Gov. Bobby Jindal, considered a likely 2016 presidential candidate, who traveled to the outskirts of Lake Charles for the official announcement of the plan in 2012. The state thinks it’s an economic slam dunk. One study from Louisiana State University projected that it would have a total economic impact of $46.2 billion. It is the largest industrial project in the history of Louisiana. And after a community meeting on Tuesday, it’s one step closer to realization.

But that massive plant will come with a steep environmental price. It will produce more greenhouse gases than any other facility in the state. And the project will almost certainly spell the end for the 224-year-old settlement of Mossville, a poor enclave that has been forced to play host to industrial facilities no one else wanted in their backyard.

An analysis conducted by the Louisiana Department of Environmental Quality (DEQ) in February determined that the new project “will result in significant net emissions increases” of greenhouse gases, promethium, sulfur oxide, nitric oxide, and carbon monoxide. By its calculations, the plant will spew out more than 10 million cubic tons of greenhouse gases per year. (By contrast, the Exxon-Mobil refinery outside Baton Rouge, a sprawling complex that’s 250 times the size of the New Orleans Superdome, emits 6.6 million tons.)

“This is their ancestral home. These are descendants of slaves that moved here when they weren’t wanted in any other parts of the community.”

Nonetheless, the DEQ determined that the facility would have no impact on the soil or air quality, and wouldn’t significantly affect the water supply, although “some change in existing water quality may occur.” It cleared SASOL under the Clean Air and Clean Water acts, and recommended moving forward with plans to build the facility on three square miles near Mossville, an unincorporated, predominantly African American community in the mostly-white Lake Charles suburb of Westlake.

There are 14 industrial facilities around Mossville, a community that’s just five square miles in area. A 1998 EPA study found chemical toxins in the hamlet’s air 100 times higher than the national standard. Another study found that 84 percent of residents had some sort of central nervous system disorder. Its residents at one point appealed to an international court, the Inter-American Commission on Human Rights, on the grounds that the continued pollution of the neighborhood constituted environmental racism. (That appeal is ongoing.) The community was also featured in a 2002 documentary, Blue Vinyl, on the toxic consequences of manufacturing building materials.

“These people are not interested in moving,” says retired Lt. General Russel Honoré, a Louisiana native who managed the Army’s response to Hurricane Katrina and has formed an organization, the Green Army, to push for environmental justice on the Gulf Coast. Honoré, who is considering a run for governor next year, became involved in the effort to block the plant from being built at the request of Mossville residents last fall. “This is their ancestral home. These are descendants of slaves that moved here when they weren’t wanted in any other parts of the community.”

But over the years their polluted surroundings have left Mossville citizens little option but to pick up stakes. Residents have for years petitioned the government to provide funding for relocation. In 1998, Condea Vista, a chemical company that has since been absorbed by SASOL, bought out 206 homeowners in Mossville after a class-action lawsuit alleging the company had allowed the carcinogen ethylene dichloride to seep into the town’s soil.

As it paves the way for its new gas-to-liquid plant, SASOL is currently offering to buy all properties in the area at 160 percent of their appraised value. Because there aren’t any recent home sales in Mossville to go off of, the company’s independent appraisers based their valuations on similar houses in “higher-value” communities in the parish.

SASOL says the backlash—manifesting itself in the press and at contentious public meetings—is coming from a fraction of the community. According to the company, more than 80 percent of homeowners eligible for the buyout program have registered, of those that have been formally offered buyouts already,* more than 99 percent have accepted their offers. The company has already taken over Mossville’s elementary school. A January report in the Lake Charles American Press projected that just 62 houses in Mossville would remain after the buyouts. Some residents who took deal have expressed relief at finally being given a way out. But the holdouts, in addition to not wanting to leave their ancestral home, fear they’ll be unable to afford new houses in less-polluted areas.

There’s reason for distrust. The community’s efforts to rein in polluters have been met with underhanded tactics in the past. In 2010, SASOL was sued by the Lake Charles chapter of Greenpeace for infiltrating and spying on the group. That lawsuit was dismissed, but the facts held up. As Mother Jones reported in 2008, prior to be being purchased by SASOL, Condea Vista had paid private security firm Beckett Brown International $200,000 to collect intelligence on Greenpeace and other activists who were attempting to hold the company accountable for polluting the region. BBI called the operation the “Lake Charles Project.”

The twilight of Mossville is only the latest in a history of southern Louisiana communities being erased by the march of industry. In 2002, Shell bought out residents of the community of Diamond, on the Mississippi River south of New Orleans, after decades of health defects and industrial accidents. African American residents of Morrisonville, Sunrise, and Revilletown all met similar fates. More than 100 residents of Bayou Corne have taken buyouts from solution-mining company Texas Brine since Jindal issued a mandatory evacuation order in August 2012. Grand Bayou, next door to Bayou Corne, ceased to exist after a broken cylinder in an underground storage cavern filled the community with poisonous gases. It is now memorialized by concrete slabs and a solitary road sign.

“That’s the thing that hurts,” says Dorothy Felix, a seventh-generation Mossville resident and community activist. “I’m going to leave all of this behind, a place that I love so much, a place that I grew up, a place that I saw go from rags to riches. Now it’s about to go to nothing but the plants.”

*Correction: This article originally misstated the percentage of residents who had signed up for the buyout program.