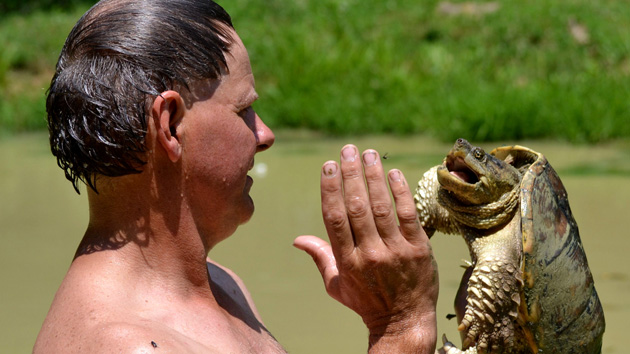 Television network Animal Planet Canada has abruptly canceled upcoming episodes of the scandal-tainted reality show Call of the Wildman just days before a new season was scheduled to air, Mother Jones has learned. The show, which follows the antics of the Kentucky animal wrangler known as Turtleman, has come under intense scrutiny after a series of Mother Jones investigative reports exposed mistreatment and neglect of animals—a drugged zebra, dying baby raccoons, a stricken coyote—and possible legal violations by the production. The revelations sparked outrage among fans, gave rise to petitions calling for the show to be canceled, and have led to multiple federal and state investigations.

The Animal Planet Canada team made the programming decision after a meeting on Wednesday to “review our spring programming lineup,” according to a statement emailed to Mother Jones by Jodi Cook, a spokeswoman for Bell Media, the parent company of Animal Planet Canada. Cook suggested that the show was canceled due to a lack of popularity among viewers:

Call of the Wildman has not been resonating with Canadian audiences and the decision was made not to move forward with Season 3 this month as previously announced.  We will be replacing that title with content that is more in line with other programming that’s performing well with our Canadian viewers.  There are no plans to return Call of the Wildman to our schedule at this time.

The program—touted as a “hit series” in a recent press release from the network—appeared to resonate with fans who visited Animal Planet Canada’s website as recently as last week: “Call of the Wildman is the best show ever. Please, please, please start a new season in 2014. If you don’t, I will never watch animal planet ever again,” read one of several similar comments posted. Another commenter said: “I want new turtle man for 2014. My kids love him and ask everyday when is a new one coming on. Please tell me that it coming on soon.”

Season three of Call of the Wildman had been scheduled to return to Canadian airwaves on April 7 at 8pm, according to a March 4 press release posted on the company’s website: “Animal Planet’s hit series Call of the Wildman returns for a third ‘snapperlicious’ season with 10 brand-new episodes.” As of late Wednesday, however, that press release had been scrubbed of any reference to the show.

Bell Media did not respond to follow-up questions about the decision, including whether or not Mother Jones’ reporting and the subsequent public outcry had played into dropping the show.

While it’s not unheard of for television schedules to change last-minute, “nobody wants to have that kind of change in a release date that close to anything,” said Paul Dergarabedian, a television and film industry analyst for Rentrak, a media research firm. Given the associated marketing costs, such last-minute changes are likely to be “cause for a bit of a stomach ache on the part of executives.” Amanda Lotz, a media scholar at the University of Michigan, agreed that the move would be financially and logistically undesirable; in this case she speculates that the decision was probably driven by worries about a larger cost: “My suspicion would be that there’s ample concern about the negative publicity” that Animal Planet would face, she said, if it went ahead with the new season.

Animal Planet Canada is the sister network to the popular American network, carrying the same branding and a lot of the same content; it reaches almost 1.8 million viewers in an average week, according to its corporate website. Ratings for the show itself in Canada are not publicly available, but in the US, Call of the Wildman helped Animal Planet achieve its best ratings year ever in 2013, delivering or surpassing one million total viewers during the year. While majority Canadian-owned, Animal Planet Canada is financially connected to the US operation: According to the Canadian Radio-television and Telecommunications Commission, ten percent of the network is controlled by Animal Planet North America, Inc., which is in turn owned by US-based Discovery Communications.

It remains unclear whether Animal Planet in the US plans to air a new season of the show, and if so, when. The network and Sharp Entertainment, the producers of Call of the Wildman, did not respond to requests for comment about the show’s future.