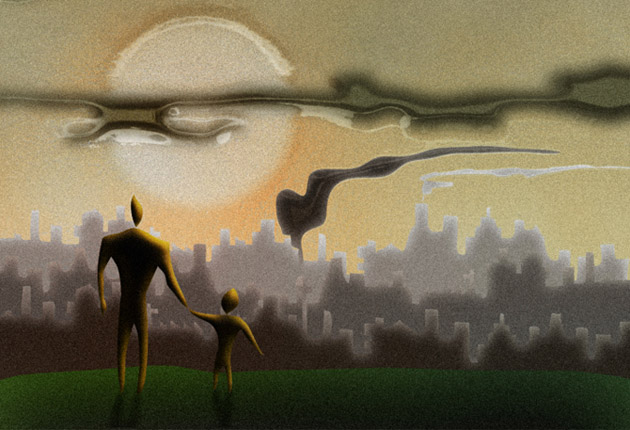 It’s self-evident that embryos, fetuses, and babies are vulnerable. We have strict laws protecting children because they cannot fend for themselves. And yet, too often, we ignore the impact that environmental disasters have on the very earliest stages of life. In her new book, This Changes Everything: Capitalism vs. the Climate, Naomi Klein examines the effect that our reliance on fossil fuels has on the most helpless members of the animal kingdom—as well as on our own children.

“In species after species, climate change is creating pressures that are depriving life-forms of their most essential survival tool: the ability to create new life and carry on their genetic lines,” Klein writes. “Instead, the spark of life is being extinguished, snuffed out in its earliest, most fragile days: in the egg, in the embryo, in the nest, in the den.”

Take the case of the leatherback sea turtles. These ancient creatures have been around for 150 million years, making them the longest-surviving marine animals on earth. As Klein points out, they’ve survived the “asteroid attacks” that likely wiped out the dinosaurs. But now they are threatened by a combination of poaching, fishing and climate change. One recent study found that as temperatures rise over the next century, “egg and hatchling survival will rapidly decline” for sea turtle populations in the Eastern Pacific.

The leatherback turtles have “survived so much,” says Klein on this week’s episode of the Inquiring Minds podcast. “But it’s not clear that they’re going to be able to survive even incremental climate change, because what’s happening already is that when the eggs are buried in the sand, even if the sand is just marginally hotter than it used to be, that the eggs are not hatching; they’re cooking in the sand.” What’s more, turtles don’t have sex chromosomes—they turn into males or females based on the ambient temperature of the sand in which they are born. Hotter sand means more female turtles hatch. And the danger is that warming could eventually result in a significant imbalance between males and females, ultimately decimating the species.

While writing the book, Klein was going through her own fertility crisis, so she says she was particularly attuned to the fragility of new life and the impacts that stressors can have on reproduction. And she began to notice a common theme in the after-effects of environmental catastrophes. In the wake of the 2010 BP oil spill, for example, she toured the Louisiana marshes. With Jonathan Henderson, an organizer with the Gulf Restoration Network, guiding the way, Klein and a few others set out to investigate whether the oil from the Deepwater Horizon had permeated the bayous. It was the fish jumping in dirty water and the coating of reddish brown oil that impressed Klein and her companions.

But what most concerned Henderson, recalls Klein, was the nearly invisible cost of the disaster: the tiny zooplankton and juveniles that grow into the shrimp, oysters, crabs, and fish that are the bedrock of the Gulf fisheries. “What he was preoccupied with was the fact that this was spawning seasoning,” Klein says. “And that even though we couldn’t see it, there was just a huge amount of proto-life surrounding us, and this was spring in the Gulf and everything was spawning.”

Drifting in the marshlands, Klein writes that she “had the distinct feeling that we were suspended not in water but in amniotic fluid, immersed in a massive multi-species miscarriage.”

“I had the distinct feeling that we were suspended not in water but in amniotic fluid, immersed in a massive multi-species miscarriage.”

These effects, she argues, may be felt years later, when those juveniles should be reaching maturity. “Looking into it in the context of the Gulf, we’ve heard a lot of really concerning stories directly from fishermen saying that they’re not seeing baby fish out there,” Klein says. “Or they’re seeing female crabs without eggs.” In her book, she recounts a 2012 interview with a Florida fisherman named Donny Waters who had noticed the absence of small fish in his catches. This hadn’t yet cut into his income, since small fish are thrown back. But Waters was worried that the impact would be felt in the years to come—specifically, in 2016 or 2017, when those fish that were in the larval stage during the spill would have grown up.

This wouldn’t be the first time that an oil spill had a delayed effect on the fishing industry. “The greatest and most lasting impacts on the fish in Alaska had to do with this delayed disaster,” says Klein, referring to the Exxon Valdez spill in 1989. “It wasn’t until three or four years after the spill that the herring fishery collapsed.” Twenty-five years later, it still hasn’t recovered.

What’s more, scientists say the spill might also help explain the deaths of an unusual number of young bottlenose dolphins in the northern Gulf of Mexico. In a paper published in PlosONE in 2012, Ruth Carmichael and her colleagues examined whether the spill contributed to a “perfect storm” of events that killed 186 dolphins—46 percent of whom were perinatal calves (that is, babies)—in the first four months of 2011. 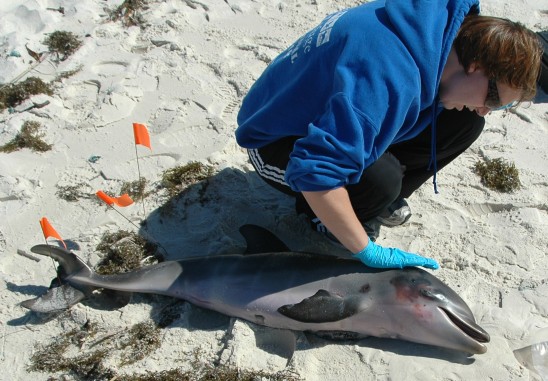 An unusually high number of young bottlenose dolphins died in the Gulf of Mexico between January and April 2011. Graham Worthy/University of Central Florida

“When we put the pieces together,” explained Carmichael in a 2012 press release, “it appears that the dolphins were likely weakened by depleted food resources, bacteria, or other factors as a result of the 2010 cold winter or oil spill, which made them susceptible to assault by the high volumes of cold freshwater [from heavy snowmelt] coming from land in 2011 and resulted in distinct patterns in when and where they washed ashore.”

By April 2014, 235 stranded baby bottlenose dolphins had been found, “a staggering figure, since scientists estimate that the number of cetacean corpses found on or near shore represents only 2 percent of the ‘true death toll,'” Klein writes.

Of course, this research isn’t conclusive. A BP spokesperson notes that dolphins in the Gulf began dying off before the oil spill and that unusual mortality events “occur with some regularity.” For its part, the National Oceanic and Atmospheric Administration states that the “direct or indirect effects” of the spill are being “investigated as potential causes or contributing factors for some of the strandings” but that “no definitive cause has yet been identified.” 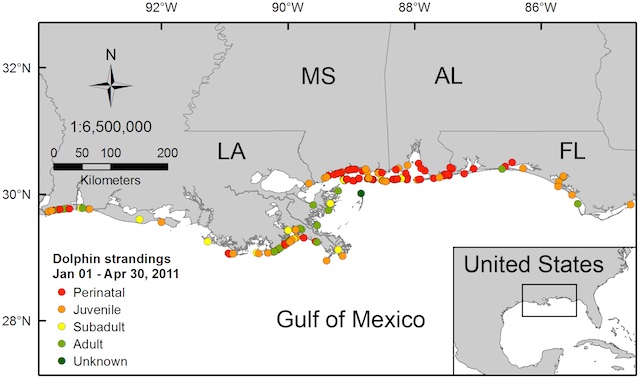 Further up the food chain, Klein is also concerned about the potential impact of environmental pollution on human fertility. During the same trip that took her through the marshlands of Louisiana, she also visited Mossville, the historic African American town notorious as a case study in environmental racism.

“This was a town formed by freed slaves, and after being established, it was surrounded by 14 massive petrochemical factories, and the land and water was just poisoned, and most of the people have already left,” Klein says.

While worries about cancers and other illnesses in Mossville have been covered fairly extensively in the media, the issue of fertility problems is less well known. “When I spoke to women who had lived in Mossville, what I heard about was just an epidemic of infertility and that just so many women had hysterectomies,” Klein says. These stories are anecdotal, but Klein hopes more research will be done. “This is often just an understudied part of science,” she says.

Klein also points to emerging research that links the fracking boom with various reproductive problems. In a Bloomberg View column earlier this year, Mark Whitehouse reported on data presented at the annual American Economic Association meeting from a yet-to-be published study of Pennsylvania birth records that apparently found a correlation between proximity to shale gas sites and low birth weight in babies. Babies born within a 2.5-kilometer radius of gas drilling sites were almost twice as likely to have a low birth weight (increasing from 5.6 percent to 9 percent of births) or a low APGAR score, the first evaluation of a baby’s health after birth. And a study published this year examining birth outcomes and proximity to natural gas development reported that mothers who lived within 10 miles of the highest number of fracking sites (125 wells within a 10-mile radius) were 30 percent more likely to have babies with congenital heart defects and twice as likely to have babies with neurological problems compared to mothers whose homes were at least 10 miles away from any fracking site.

Then there’s the threat that climate change itself poses to children. Last year, UNICEF warned that “more severe and more frequent natural disasters, food crises and changing rainfall patterns are all threatening children’s lives” and that by 2050, climate change could result in an additional 25 million children suffering from malnourishment.

“For all the talk about the right to life and the rights of the unborn,” writes Klein, “our culture pays precious little attention to the particular vulnerabilities of children, let alone developing life.”

Inquiring Minds is a podcast hosted by neuroscientist and musician Indre Viskontas and best-selling author Chris Mooney. To catch future shows right when they are released, subscribe to Inquiring Minds via iTunes or RSS. We are also available on Stitcher. You can follow the show on Twitter at @inquiringshow and like us on Facebook. Inquiring Minds was also recently singled out as one of the “Best of 2013” on iTunes—you can learn more here.