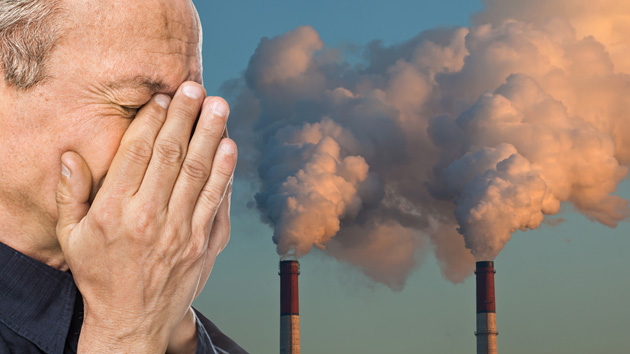 If you want to prevent cognitive decline with old age, doctors have long recommended eating well, getting enough rest, exercising, reading plenty of books, and staying socially active. Pretty soon, they might start recommending a move out to the countryside.

Scientists have long linked air pollution exposure with cardiovascular diseases, respiratory illnesses, and cancers, but now they suspect a connection between dirty air and brain diseases like Alzheimer’s and Parkinson’s.

Living in places with high levels of air pollution, such as cities and along busy highways, may accelerate aging of the brain. In a new study published in the Annals of Neurology, researchers found that over time, increased exposure to air pollution in a group of elderly women without dementia led to significant decreases in their brains’ white matter, which is important for cognition.

The researchers, led by Dr. Jiu-Chiuan Chen of the University of Southern California, looked in particular at exposure to fine particles, which can come from fires, coal-fired power plants, agricultural and industrial emissions, and especially cars and trucks. These particles, which are about 36 times finer than a grain of sand, can enter the lungs and travel into the bloodstream, causing serious damage to the body. The researchers estimated air pollution exposure for a group of 1,403 elderly women from 1999 to 2006, and found that those who were exposed to an increase of 3.49 micrograms of fine particles per cubic meter of air—similar to the increase in pollution you’d get by moving right next to a busy road—experienced a decrease in white matter volume as if their brains had aged an extra one or two years.

These findings support a growing body of new evidence—uncovered today in a Mother Jones investigation by Aaron Reuben—that suggests air pollution’s assault on the body goes much deeper than we previously believed. While scientists have long understood that exposure to fine particles is linked with increased risk of heart attack, stroke, and other cardiovascular diseases, as well as respiratory illnesses and cancers, they are only just beginning to suspect that this type of pollution may also be leading to or exacerbating degenerative diseases like Alzheimer’s and Parkinson’s.

As Reuben reports, when we inhale fine particles, they can actually travel along a pathway from our noses directly into our brains. This results in inflammation, the body’s natural response to pathogens that, over time, can lead to a wide range of chronic diseases. Over the past decade or so, a number of studies, controlling for things like ethnicity, income, education, and other environmental factors, have shown that elderly people living in polluted places seem to lose their mental abilities faster, show more predementia symptoms, and develop Alzheimer’s disease at greater rates than those who breathe cleaner air. Even children in polluted places have shown signs of brain trauma. To learn more about the terrifying new science behind these findings, check out Reuben’s full investigation here.