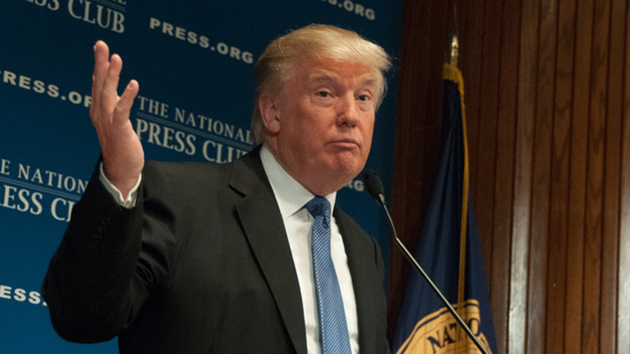 This story was first published by the Huffington Post and is reproduced here as part of the Climate Desk collaboration.

The Republican presidential candidates gathering in Cleveland for Thursday’s debate are sure to get questions about the Affordable Care Act, Planned Parenthood, and immigration.

All of those issues deserve attention. But maybe the first question should be about President Barack Obama’s latest effort to slow climate change.

The Environmental Protection Agency on Monday released a final version of new regulations designed to limit greenhouse gas emissions from existing power plants. Technically, the regulations are part of the Clean Air Act, which became law in the 1970s and gives the federal government broad powers to regulate pollutants that threaten public health.

The new regulations call upon states to devise plans that cut down on carbon output from power plants—which, in practice, could mean anything from shutting down aging coal-fired generators to creating multi-state markets for trading pollution permits. States must produce their plans by 2018, and begin making cuts by 2020. In states where officials decline to submit plans, as the law envisions, the EPA will step in and impose blueprints of its own making. (The Huffington Post‘s Kate Sheppard has all the details—and the case Obama is making in favor of these new regulations.)

Monday’s announcement is the latest step in the Obama administration’s ongoing effort to limit greenhouse gases. The idea is to reduce carbon emissions from existing power plants by about one-third, relative to 2005 levels, by 2030. You can make a credible argument that, taken together, the president’s efforts to slow climate change belong alongside the Affordable Care Act, the American Recovery and Reinvestment Act, and the Dodd-Frank financial reforms as cornerstones of Obama’s legacy on domestic policy.

But that depends, in part, on the next administration implementing these new regulations faithfully. And that may not happen.

Even before the rules became final, Republicans were vowing to fight them. “This is going to be a disaster,” Jeb Bush, the former governor of Florida, told a gathering of conservative donors that the Koch Brothers convened on Sunday. Formal release of the regulations on Monday produced still more condemnations. “This is a buzzsaw to the nation’s economy,” Scott Walker, the governor of Wisconsin, said at a candidate forum in New Hampshire.

Undoing regulations isn’t as easy as it may sound. But environmental advocates told the Huffington Post that Obama’s successor could stall or undermine the regulations in myriad ways—and maybe even reverse them altogether, although that would be difficult.

“The next president will determine whether the United States continues to cut the pollution responsible for climate change, or ignores the problem while costly climate impacts—such as wildfires, drought, and floods—accelerate,” said Daniel J. Weiss, senior vice president for campaigns at the League of Conservation Voters.

Here are some of the strategies a president eager to block the power plant rules could try:

1. Sign legislation rescinding Obama’s regulations. Here’s how it would work: Congress would pass a law modifying or repealing part of the Clean Air Act in order to block the new regulations from taking effect. Then the new president would sign it.

It would be the most straightforward way to undo Obama’s regulatory changes. It also could be the most difficult, because it would require a majority in the House and, most likely, a 60-vote supermajority to overcome a filibuster in the Senate.

If Congress were serious about trying this and Republican leaders (the presumptive heads of such an effort) could not jam through legislation quickly, environmental advocates would have time to organize and make their case publicly. They would run ads and make speeches chronicling the real-life impact of climate change—like drought, rising seas, and greater health problems.

Opponents of the regulations would make arguments of their own—contending, for example, that the rules could reduce jobs in the coal industry or drive up utility bills. Those arguments would surely resonate with a lot of people, though it’s an open question whether they would be enough to get a bill out of committee and passed in floor votes in both chambers.

2. Issue new regulations that override or undermine Obama’s. This wouldn’t require an act of Congress. A Republican president could make this happen simply by having his (or her) hand-chosen EPA administrator issue a new regulation, significantly modifying or completely rescinding Obama’s new EPA rules.

But that would still take time, because regulatory changes happen through a fixed, legally prescribed process. First, officials must announce their intention to write a new rule. Then they must publish a preliminary version of that rule and allow time for the public, including corporations and interest groups, to comment. Then the officials have to consider the comments, while conducting analyses of costs and benefits. (For context, the EPA’s new power plant rules received a record 4.3 million comments.)

That process likely would take at least 12 to 15 months. During that time, environmental advocates could organize a lobbying campaign in defense of the regulations, just as they could if Congress were trying to undo the regulations through legislation. And if a new administration pushed ahead and rescinded the Obama regulations anyway, environmental groups could sue—arguing that, by rescinding those regulations, Obama’s successor was failing to enforce the Clean Air Act.

They’d have a decent chance of winning that case, although litigation takes time—and, in the interim, some utilities and states would be looking for ways to avoid complying.

3. Weaken or eliminate enforcement of the rules. This, many experts said, is the most likely strategy a for president determined to stop Obama’s regulations.

Remember how the new EPA rules work: States submit plans that demonstrate that emissions from existing power plants will meet the new targets; the EPA then reviews the plans, to decide if they comply with the agency’s guidelines. In states where officials can’t or won’t submit plans that pass muster, the EPA gets to impose its own.

EPA regulates other pollutants, including ozone, in a similar manner. If history is any guide, some states will submit weak plans, perhaps to protect existing utilities that rely heavily on coal plants. An administration hostile to climate change regulation might approve such plan—or at least take advantage of a provision of the law that, under some conditions, gives states two extra years for finalizing and then complying with their emission plans.

Senate Majority Leader Mitch McConnell (R-Ky.) has already made a personal appeal to governors not to submit plans at all, in hopes of delaying action while the inevitable court cases are decided.

“There are a lot of ways that states could game this,” Ron White, director of regulatory policy at the Center for Effective Government, told the Huffington Post. “They could submit a B.S. plan in 2016 and say we want a two-year extension, and then count on an administration hostile to regulation to say okay, that’s fine.”

Lawsuits from environmentalists would challenge lax enforcement, but with, at best, mixed effects. “There are some checks and balances in terms of the potential to sue for a court order if EPA fails to do its job in a timely manner, but that process itself takes time and is not a substitute for an administration that views this issue as a priority,” said Jennifer Macedonia, a senior adviser and energy policy specialist at the Bipartisan Policy Center.

Case in point: The Bush administration famously—and controversially—was slow to implement regulations limiting mercury emissions, fending off lawsuits pretty much through the end of its tenure.

That legal saga could take three or four years to play out. In the meantime, lower courts are likely to hear other cases, including challenges to rulings that the EPA makes about individual state plans. Such lawsuits could come from a utility angry that the EPA has rejected a state plan—or from environmental advocates upset that the EPA has accepted a weak one.

Either way, the makeup of the federal judiciary—up to, and including, the justices of Supreme Court—will make a huge difference. Judges sympathetic to business and, perhaps, the rights of states may be inclined to rule against the EPA. Judges and justices who favor regulation and take climate change seriously may be inclined to take the agency’s side.

While the final plan includes tweaks designed to accommodate legal concerns and the current Supreme Court has been largely supportive of the EPA’s authority to regulate power plants, the most recent case before the court was decided against the agency on a 5-4 margin, with swing vote Anthony Kennedy as the deciding justice. The replacement of any of the court’s liberal justices with a justice more skeptical of federal regulation would likely result in more losses for the EPA.

In theory, all judges are supposed to interpret the law as written. But in cases like these—which involve not just the interpretation of statutes and constitutional clauses, but also scientific and economic findings—judges have all kinds of leeway.

5. Simply halt progress on fighting climate change. Even the most enthusiastic supporters of the new power plant rules concede they’re just one step of many that the US and, eventually, the world must take in order to keep global temperature increases below 2 degrees Celsius by the century’s end. That’s the target that environmental advocates and climate scientists have identified as necessary to avoid some of the most catastrophic effects of climate change. It’s also the that goal that world leaders have embraced in international negotiations.

Hitting those goals will require some combination of more investment in renewable energy and steeper reductions in emissions—not just from power plants, but also from other industrial sources, agriculture and automobiles. (That’s why some close observers said the Obama rules, though welcome, are “weak.“) But environmental advocates can’t lobby for new rules if they are preoccupied fighting to implement the existing ones.

“We want future action on this, not to be fighting rear-guard battles,” said David Goldston, director of government affairs at the Natural Resources Defense Council.

A prolonged, presidency-long fight over implementation wouldn’t merely bog down environmental advocates, Goldston warned. It would also stop the climate policy debate from evolving to the point where left and right argue how to best slow global warming, rather than whether to slow it all.

“The way I sometimes put it,” Goldston said, “is that when this finally is in effect, climate will become an ordinary environmental issue. Which doesn’t mean there are no disputes, or that everybody agrees on what to do. But you’re not refighting first principles every single time, and I think that’s a really important stage in the debate to reach.”