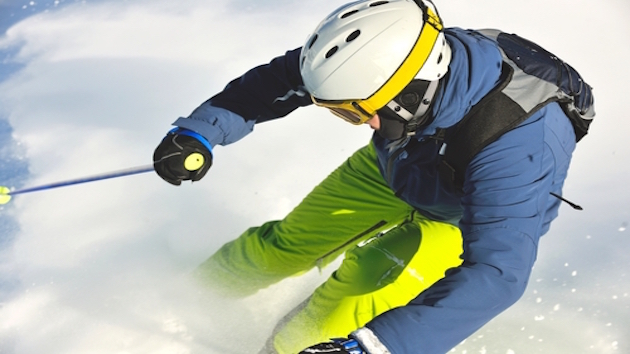 That bike or ski helmet you’re wearing may make you feel just a bit too confident. It might even bring out your inner Evel Knievel—tempting you to take risks you otherwise wouldn’t have. That, in any case, is the suggestion of a new study by researchers at the University of Bath in the UK.

The study wasn’t actually conducted on bikers or skiers, though. It was done in a psych lab. Pretending they were doing an eye-tracking experiment, the psychology researchers fitted their 80 participants with the appropriate apparatus: For half of the subjects, it was mounted on a baseball cap; for the rest, on a bicycle helmet. Of course, helmets vs caps (the control) was the true focus of the experiment. Each subject was then asked to blow up a virtual balloon on a computer screen as far as possible without letting it pop.

“Does a police officer wearing body armor and a helmet, for example, put themselves in harm’s way more than they would otherwise?”

The people wearing the helmets inflated their balloons 30 percent larger, on average, than their cap-sporting counterparts, an indication, according to the researchers, of their willingness to take risks. Because the participants weren’t actually riding a bike, which means the helmet served no protective function whatsoever, the notion is that we respond subconsciously to the presence of safety equipment. If the findings can be broadened to apply to more than just helmets, “it is quite likely that those wearing other types of safety equipment might also take more risks,” the aptly named lead author Tim Gamble told me via email. “Does a police officer wearing body armor and a helmet, for example, put themselves in harm’s way more than they would otherwise? And do they make more risky strategic decisions in any given situation?”

Gamble and his colleague Ian Walker wrote in their paper—which published this week in the journal Psychological Science—that people using protective equipment could be “unduly inclined to take risks that such protective equipment cannot reasonably be expected to guard against.” In other words, don a helmet and you might just use it as an excuse to ski off that cornice, tackle that hairy mountain-bike trial, or attempt a 720 in the halfpipe.

This idea isn’t exactly new. Known as “risk homeostasis” or “risk compensation,” it has been cited in other studies suggesting that people drive faster while wearing seatbelts, or more aggressively when they know their cars had anti-lock brakes and airbags. (It also was reportedly raised to argue against installing train safety gear back in the 19th century, and much later by people objecting to the distribution of condoms as a tactic to fight HIV transmission—because free condoms might actually encourage high-risk sex.)

Researchers hit the slopes and found that alpine skiers with helmets skied about three miles per hour faster than unprotected skiers.

So, some helmeted people overinflated a balloon on a computer screen. Does that mean I’m better off ditching my ski helmet or riding to work without a bike helmet?

Not so fast. Risk homeostasis is pretty controversial. In a 2002 tit-for-tat on the subject as it relates to auto safety features such as seat belts and airbags, a former Yale epidemiologist and the editor of the journal Injury Prevention dismissed studies supporting the theory.

The jury is still out on helmets. During the winter of 2002-2003, researchers at the Rochester Institute of Technology hit the slopes with speed radar and found that alpine skiers who wore helmets skied about three miles per hour faster than unprotected skiers, and that seasoned skiers with helmets (largely men) were the most at risk for head injuries. In 2012, The New York Times reported that the use of ski helmets had reached an all-time high, yet head injuries and fatalities remained the same.

That same year, a study from the John Hopkins University School of Medicine concluded that helmets decreased both the severity and risk of ski injuries. “There really is a great case to be made for wearing helmets,” study leader Adil H. Haider, an associate professor of surgery, noted in a statement.

Helmets offer  protection up to about 14 mph, says one risk manager. But experienced skiers and boarders fly downhill nearly twice as fast.

Stephanie A. Kolakowsky-Hayner, a physician and chief operating officer of the Brain Trauma Foundation, told me she hopes studies like Gamble’s won’t turn people off from helmets, but rather that they will help people recognize that helmets might not offer as much protection as we suspect they do.

“A helmet isn’t some sort of panacea or silver bullet,” acknowledges Dave Byrd, the National Ski Areas Association’s director of risk management. It offers significant protection up to 14 mph or so, he says. Of course, experienced skiers and boarders tend to fly downhill at speeds closer to 26 mph. People should definitely wear helmets, Byrd suggests, “but ski as if they’re not wearing one.”