At a campaign stop in Henniker, New Hampshire, last week, Ted Cruz was asked what he’d do as president to combat climate change. Cruz’s answer—an eight-minute rant that you can watch below—was essentially that he would do nothing—because global warming isn’t happening. It’s “the perfect pseudoscientific theory” to justify liberal politicians’ quest to expand “government power over the American citizenry,” he said.

Like Cruz, the two GOP front-runners in the state—Donald Trump and Marco Rubio—reject mainstream climate science. Trump has repeatedly called global warming a “hoax,” and Rubio has said, “I do not believe that human activity is causing these dramatic changes to our climate the way these scientists are portraying it.” John Kasich, who’s been rising in the New Hampshire polls in recent weeks, has made a number of contradictory comments about climate change.

“It’s almost a litmus test in the Republican Party that you have to reject climate science.”

New Hampshire is a famously moderate swing state. Fifty-five percent of the state’s residents believe that humans are warming the planet, according to polling by the Yale Project on Climate Change Communication. Kelly Ayotte, New Hampshire’s Republican US senator, agrees, and she recently bucked her party by supporting President Barack Obama’s new regulations restricting power plant emissions. Since 2009, New Hampshire has been part of a regional cap-and-trade program designed to limit carbon pollution.

So will Trump, Rubio, and Cruz’s extreme views on climate hurt them in New Hampshire? Probably not, at least not among the voters who will likely decide Tuesday’s primary. Ayotte’s position on the issue may align with the state as a whole, but among Republican voters climate change denial is extremely common.

“Rejecting climate science is pretty much mainstream” within the New Hampshire GOP, says Lawrence Hamilton, a University of New Hampshire sociologist who studies environmental public opinion. “It’s almost a litmus test in the Republican Party that you have to reject climate science.”

Take a look at the chart below, which shows data compiled by Hamilton and his colleagues as part of the University of New Hampshire’s Granite State Poll. The orange line represents self-identified tea party supporters in the state, and the red line represents non-tea-party Republicans. The results are pretty striking. Even among the state’s non-tea-party Republicans, only about 40 percent believe that climate change is mainly caused by human activity, according to the most recent survey. And among tea party supporters—who, according to exit polling, made up 51 percent of voters in the state’s 2012 GOP primary—that number drops below 30 percent. 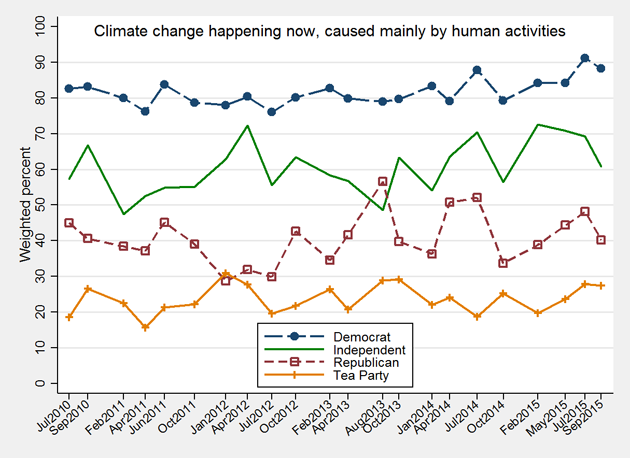 Not only are New Hampshire’s Republican voters skeptical of climate science, many of them say [PDF] they simply don’t trust what scientists say about global warming (or vaccines, for that matter). This attitude tracks closely with the anti-scientist rhetoric employed by a number of Republican politicians. Trump, for instance, once said that “the scientists are having a lot of fun” perpetrating the climate “hoax.” 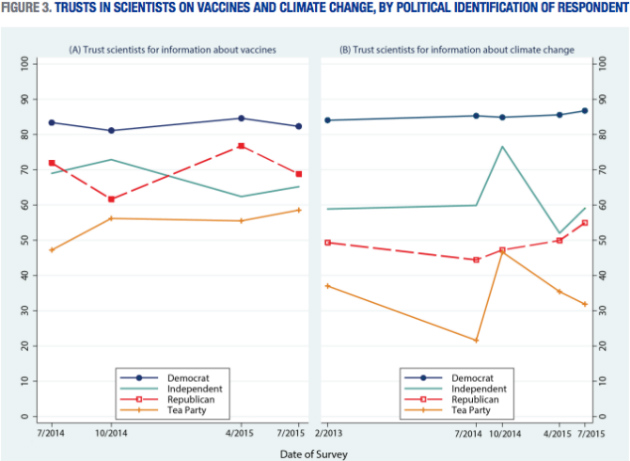 Back in September, the University of New Hampshire asked supporters of each of the presidential candidates whether they believed humans were causing climate change. Because the GOP field is so splintered, many of the sample sizes for this question were small, which means the margins of error were enormous. Still, the chart below gives you some sense of the situation. At the time, Trump and Fiorina were the two front-runners in the state, and roughly a third of their supporters said they accepted the scientific consensus on climate change. The rest of the Republicans were all polling in the single digits. Kasich was the only Republican with a majority of supporters saying they believed in human-caused global warming. (According to Hamilton, Cruz was polling so poorly at the time that any similar analysis of his voters wouldn’t be very meaningful.) Meanwhile, the vast majority of Hillary Clinton’s and Bernie Sanders’ supporters embraced the scientific consensus. 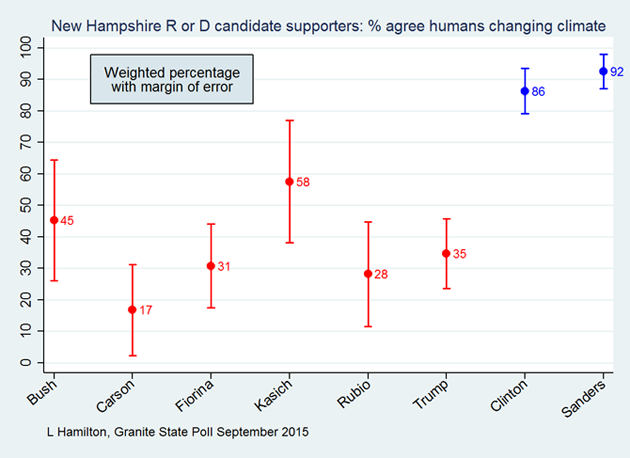 Here’s one final chart from Hamilton’s research illustrating just how extreme New Hampshire’s GOP voters are when it comes to climate change. The University of New Hampshire asked respondents whether they believed that the concentration of carbon dioxide in the Earth’s atmosphere had increased in recent decades. This shouldn’t be a controversial issue. Scientists have daily measurements showing that CO2—the primary driver of global warming—has been steadily rising for years. But somehow, fewer than half of those who said they would support Trump in a hypothetical matchup against Sanders agreed with this indisputable scientific fact. 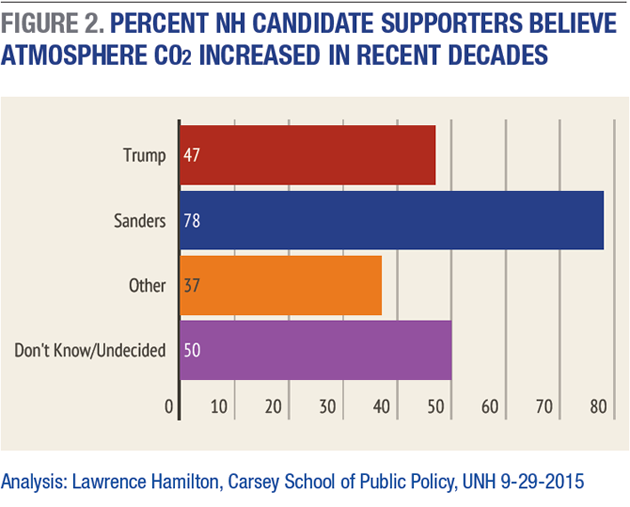 These voters have an “ideological way of knowing that trumps science,” said Hamilton.

That’s bad news for the climate change debate in this country. But it’s very good news for Trump, Rubio, and Cruz.