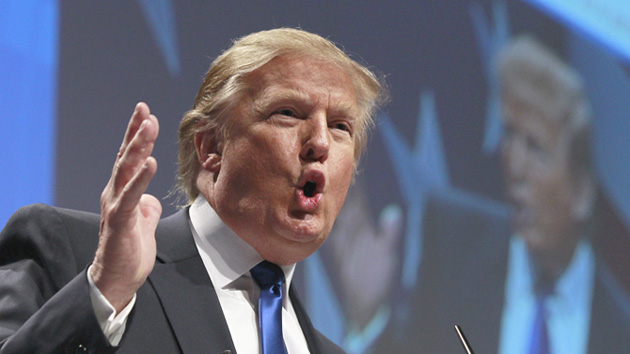 Donald Trump has announced he’s running for president! And while the real estate and necktie tycoon has no chance of actually winning, a White House bid would provide him with an even larger platform to spread his unique blend of anti-science nonsense. Here are some examples:

1. Climate Change. Trump contends that global warming is a “hoax.” Here he is on Fox News last year, citing extreme winter weather as evidence that climate scientists are wrong:

2. Vaccines and autism. Trump is an advocate for the completely baseless theory that vaccines can cause autism. “I’ve seen people where they have a perfectly healthy child, and they go for the vaccinations, and a month later the child is no longer healthy,” he said on Fox in 2012. “It happened to somebody that worked for me recently. I mean, they had this beautiful child, not a problem in the world. And all of a sudden, they go in, they get this monster shot. You ever see the size of it? It’s like they’re pumping in—you know, it’s terrible, the amount. And they pump this into this little body. And then all of the sudden, the child is different a month later. And I strongly believe that’s it.”

Trump claims to be “all for vaccinations” but argues they should be given “separately and over an extended period of time, not all at one time”—an idea that medical experts reject. Back in September, Trump went on an extended Twitter rant about the issue:

No more massive injections. Tiny children are not horses—one vaccine at a time, over time.

I am being proven right about massive vaccinations—the doctors lied. Save our children & their future.

I’m not against vaccinations for your children, I’m against them in 1 massive dose.Spread them out over a period of time & autism will drop!

So many people who have children with autism have thanked me—amazing response. They know far better than fudged up reports!

3. Ebola. Last summer, Trump protested the decision to transport American health care workers who had been infected with Ebola in West Africa back to the United States for treatment:

Ebola patient will be brought to the U.S. in a few days – now I know for sure that our leaders are incompetent. KEEP THEM OUT OF HERE!

Stop the EBOLA patients from entering the U.S. Treat them, at the highest level, over there. THE UNITED STATES HAS ENOUGH PROBLEMS!

The U.S. cannot allow EBOLA infected people back. People that go to far away places to help out are great-but must suffer the consequences!

The U.S. must immediately stop all flights from EBOLA infected countries or the plague will start and spread inside our “borders.” Act fast!

As my colleague Tim McDonnell has explained, “Health care experts, meanwhile, insisted that the risk was minimal; the two patients Trump was talking about were ultimately brought back to the US and successfully treated without infecting anyone else.” What’s more, doctors even used blood donated by these survivors to help treat other Ebola patients. But Trump was soon back at it, accusing the Centers for Disease Control and Prevention of somehow covering up the dangers posed by the disease:

Ebola is much easier to transmit than the CDC and government representatives are admitting. Spreading all over Africa-and fast. Stop flights

This story was updated following Trump’s announcement that he’s running for president.