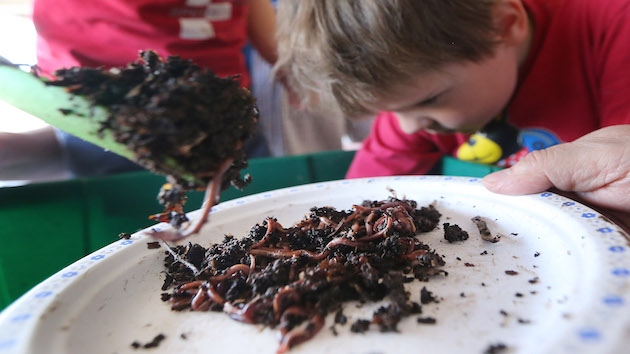 When John Wick and his wife, Peggy Rathmann, bought their 540-acre ranch in 1998, it was in bad shape. Located in California’s Marin County, a windswept region northwest of San Francisco Bay, the land had been worn down by overgrazing; the grass was gone and the soil was degraded. Neither Wick nor Rathmann knew how to fix it because the couple didn’t have any ranching experience—Wick worked in construction management, and Rathmann wrote children’s classics like 10 Minutes till Bedtime and Good Night, Gorilla.

So Wick consulted his friend Jeffrey Creque, a rangeland ecology expert. Creque helped Wick repair the soil by bringing back some grass—which gave the two an idea: They knew that in addition to enriching the soil, healthy grass, through photosynthesis, could remove carbon from the atmosphere. So was there a way, they wondered, to grow more grass on Wick’s land and slow global warming at the same time?

Was there a way to grow more grass on Wick’s land and slow global warming at the same time?

The theory made sense: Carbon that is absorbed by grass can be stored for hundreds of years in the grass’ roots and surrounding soil—a much better spot for it than in the air, where it warms the planet in the form of carbon dioxide. Carbon-enriched soil, in turn, feeds grass so it can grow taller and suck down even more carbon. In rangelands, this cycle takes place on a massive scale: Between the grass and the soil, a third of the world’s carbon is stored in these expanses. But tilling and overgrazing unleash that carbon. These practices also cause topsoil erosion, which compounds the problem by making it hard for grass to grow. To make matters worse, rangelands are often home to cows, and manure releases methane and nitrous oxide gases into the atmosphere. In fact, livestock are responsible for nearly one-fifth of the globe’s overall greenhouse gas emissions.

So ranchers like Wick have a chicken-and-egg problem: In order to grow carbon-absorbing grass, they need a lot of carbon in the soil—but without healthy grass, there isn’t a great way to get carbon into degraded soil in the first place. After giving the problem some thought, Creque offered a surprising solution: compost. When you combine carbon-rich organic waste—yard clippings, food scraps, and even manure—and compost it, the mixture breeds microbes that eat carbon. Spread the mixture on top of rangelands, and those microbes, Creque reasoned, could digest the carbon and deposit it into the soil before it could escape into the air. The rich soil, now full of carbon and microbes, would feed the grass—which would absorb yet more carbon.

The rich soil, now full of carbon and microbes, would feed the grass—which would absorb yet more carbon.

Wick was eager to give it a shot, so in 2008 he and Whendee Silver, an environmental scientist at the University of California-Berkeley, secured grants to run an experiment. For about $300 plus the cost of shipping, Wick bought 31 tons of compost from a facility that collects it from homes in the Sacramento Valley. Wick and Silver then spread it out on Wick’s ranch.

The results exceeded expectations. As the grass grew, tests suggested it absorbed an average of 0.4 tons of carbon per acre a year—and that, all told, the land was capturing at least 25 percent more carbon. Silver has since tried the concept in other climates—it works even in the hot, dry Sierra foothills. If compost were added to 5 percent of California’s rangelands, Silver calculates, those 3.2 million acres could eliminate 7.6 million tons of carbon emissions over a three-year period, equal to taking about 2 million cars off the roads annually.

To spread the word about this elegant solution, Wick, Rathmann, and Creque have formed a nonprofit called the Marin Carbon Project. Supported by the Rathmann Family Foundation, a philanthropy created by Peggy’s father, George, a founder of the biotech company Amgen, the project has given tours to everyone from Chinese government ministers to large Brazilian landowners, all eager to reduce their own emissions.

If compost were added to 5 percent of California’s rangelands, those 3.2 million acres could eliminate 7.6 million tons of carbon emissions.

But can it scale? Seventy-five miles inland from Marin County, Bruce Rominger and his brother grow tomatoes, wheat, rice, and vegetables on 4,000 acres and have sheep and cattle on another 3,000 acres of rangeland. Rominger was intrigued when he first heard about the Marin Carbon Project’s work, but like most farmers, he leases his land, so it’s hard to justify the cost—about $500 per acre—of putting compost on property he might not ranch in the future.

To get leaseholders like Rominger on board, there may need to be an incentive, perhaps a carbon-trading scheme whereby polluters could pay farmers to offset the polluters’ emissions. In the meantime, Wick hopes to promote the practice in his own backyard. The Marin Carbon Project has selected eight local ranches—a total of nearly 5,000 acres—to serve as model carbon farms, with state and federal grants providing compost free of charge. The goal, says Silver, is to show off the simple brilliance of the technique. Everyone creates organic waste, from plate scraps to raked leaves—and if it goes into the garbage can, it just takes up space in landfills. But, she says, “if we throw it out into a compost bin, it’s going to grow more food—and potentially slow climate change.”