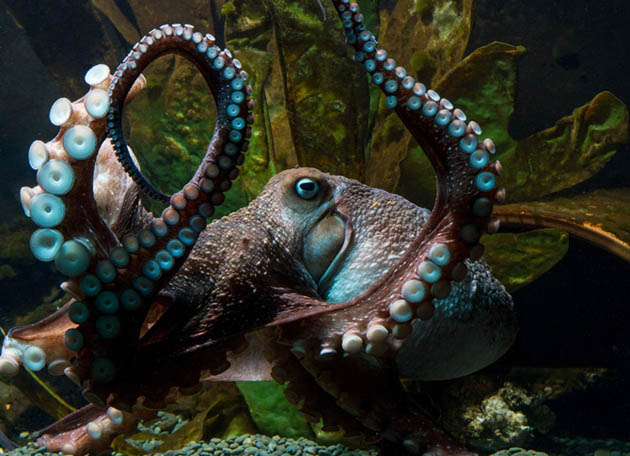 Update, 4/14/16: In case you needed any more proof of the intelligence of octopuses, Sy Montgomery noted just last week on Inquiring Minds that there are a number of stories of octopuses at public aquariums “sneaking out of their tank at night, going into another tank…then sneaking back into their own tank.” Well it turns out that Inky, an octopus in New Zealand, seems to have pulled off an even more incredible escape recently. As the New York Times explains:

The breakout at the National Aquarium of New Zealand in Napier, which has captured the imagination of New Zealanders and made headlines around the world, apparently began when Inky slipped through a small gap at the top of his tank.

Octopus tracks suggest he then scampered eight feet across the floor and slid down a 164-foot-long drainpipe that dropped him into Hawke’s Bay, on the east coast of North Island, according to reports in New Zealand’s news media.

Check out this amazing video from our partners at the Guardian, and then listen to our full interview with Montgomery below:

Let’s clear up one thing right off the bat: “Octopuses” is a perfectly acceptable plural of “octopus”—and it makes a heck of a lot more sense than “octopi.” That’s because the word derives from Greek (oktopous, meaning “eight feet”), not Latin.

This week’s episode of the Inquiring Minds podcast is all about octopuses, specifically how these amazing cephalopods—the group of marine invertebrates that also includes squid and cuttlefish—are vastly more intelligent than they get credit for. That’s right: Octopuses lead a life of the mind. Not that they have a brain like you’re probably picturing, exactly.

“Their brain is so unlike ours, it’s almost difficult to describe it as a brain,” explains Sy Montgomery, a naturalist and author whose most recent book, The Soul of an Octopus, is a fascinating dive into cephalopod psychology. “Ours is like a walnut in a shell; their brain wraps around the throat.” Montgomery was interviewed by Inquiring Minds co-host Indre Viskontas; you can listen to the entire conversation below:

In fact, most of an octopus’s neurons aren’t even in the brain, but instead reside in the tentacles. As a result, each tentacle can not only continue to function if it gets disconnected from the body, but it actually has something akin to a personality: Some limbs are daring, others more shy. Montgomery goes on to detail other amazing aspects of the octopus psyche, including recognizing human faces, forming positive or negative judgments of individual humans, navigating complex mazes, and opening child-proof bottle caps. It’s all the more impressive when you consider that unlike social, long-lived humans who can pick up cognitive skills from parents and peers, octopuses live asocial, short lives.

“Probably the thing that drove them to be intelligent is that they lost the ancestral shell,” Montgomery says. “Without a shell, everyone wants to eat them. They are programmed by nature to learn very quickly.”

Here’s an incredible video of a mimic octopus—a species that Montgomery calls the “masters of deception”: