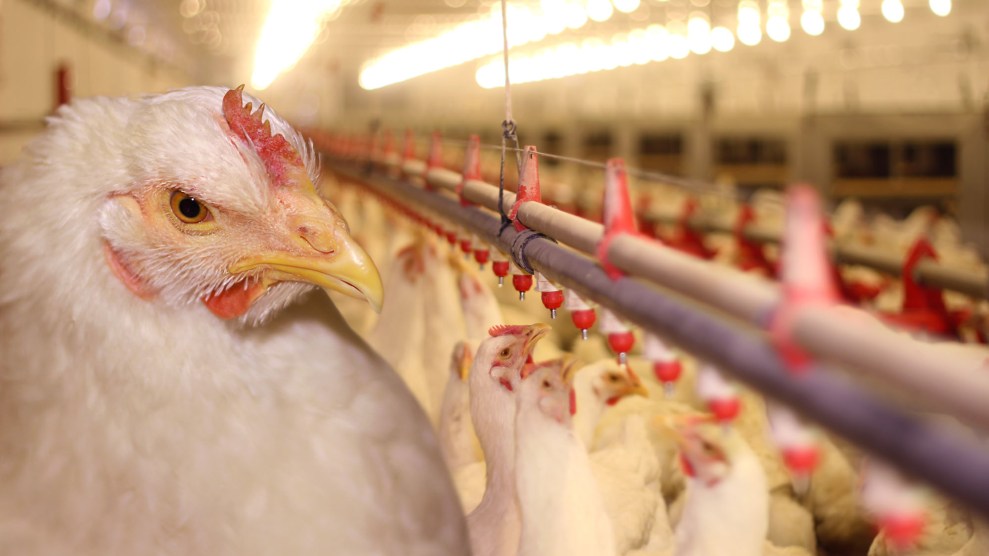 Back in 2014, a chicken farmer named Craig Watts allowed the animal-welfare outfit Compassion in World Farming to film inside one of his chicken houses, where Watts raises birds under contract with poultry giant Perdue. In a video released in December of that year (below), Watts complained about the conditions imposed by Perdue, as footage of birds with featherless, raw-looking bellies played on the screen. Perdue swiftly responded, declaring that the “conditions shown in this farmer’s poultry house do not reflect Perdue’s standards for how our chickens are raised.”

Until recently the company, the nation’s fourth-largest chicken processor, was presenting farmers with a contract that included a provision that would clamp down on such rare public glimpses behind the walls of contract poultry farming. I obtained a leaked copy of such a contract, one that forbid  farmers from taking photos or audiotapes of the chickens in their own facilities without company permission. Bruce Stewart-Brown, Perdue’s senior vice president of food safety, quality and live operations, confirmed that this language has been included in all new contracts since October 2014—before the release of the Watts video.

But then, just as I was finishing reporting and writing this story, a Perdue spokesperson told me that “we plan to remove that clause from our contracts going forward,” because “we recognize that this may cause some confusion based on where we are going as a company and our commitment to transparency.”

Watts told me that the contract he was under when he worked with Compassion in World Farming did not contain a clause about taking photographs or video. As he makes clear in the above-linked video, the contract-farming system that accounts for 96 percent of US chicken production is tough on farmers even without that stipulation. Five large companies slaughter 60 percent of the nation’s chickens, limiting farmers’ bargaining power. Farmers are expected to invest hundreds of thousands of dollars in chicken houses, based on company specifications. The company, for its part, owns the chickens throughout the process, supplies (and decides what’s in) the feed, dictates how the birds should be raised, and controls the terms under which farmers are paid.

Farmer advocates say the no-photos-without-permission clause took corporate control over the process to a new level. They compare it to a recent spate of state-level laws pushed by the agribusiness lobby to criminalize undercover videos by animal-welfare groups, chronicled in Mother Jones by Ted Genoways. But while these so-called “ag-gag” laws are designed to keep activists from infiltrating facilities, Perdue’s clause eliminates farmers’ ability to document what’s going on within the bounds of their own private property.

“This is Perdue ag-gagging their farmers,” said Leah Garces, executive director of Compassion in World Farming, who appears in the Watts video. “What if a farmer sees excessive welfare issues, food safety concerns, or misconduct by a representative of Perdue, reports them to the company, but no action is taken?”

I ran the contract past Sally Lee, who manages the contract-agriculture reform program for the North Carolina-based farmers’ rights group RAFI, and is in the midst of making a documentary on relations between contract farmers and poultry giants. She has worked with farmers under contract with several major chicken companies, but has never seen anything like Perdue’s crackdown on picture-taking.

“Taking pictures is critical for farmers to document losses in times of natural disaster, disease outbreaks, or even to participate in critical federal programs,” she said. Perdue’s clause “cuts out any transparency or opportunity for public dialogue and even for information flow between farmers. Farmers already struggle to tell their story; these new provisions hermetically seal their experience from the public eye. It begs the question: what do companies have to hide?”

In my initial interview with him, Perdue’s Stewart-Brown defended the clause. “We want to be part of the conversation—if a farmer sees something wrong, we want to know about it and work together to fix it,” he said. Also, he noted, kids often want to take photos inside chicken facilities for school projects, and “we want to ensure that they have access to good-quality photos.” And finally, he added, “they are our chickens”—that is, farmers own the facilities, but Perdue owns the birds, and has the right to control photographic images of them.

Yet the company also takes pride in what CEO Jim Perdue, in a recent interview with the trade journal Meatingplace, called “trust and transparency.” Responding to a question about the Watts video, the third-generation exec spoke of “more efforts down the road” to shine a public light on the chicken-farming process, “perhaps [even] cameras in houses.” As Stewart-Brown put it to me on the phone, the company’s photo clause “doesn’t fit in with” Jim Perdue’s transparency push. Within two days, the company had axed it.

The move is “certainly  encouraging,” said Compassion in World Farming’s Garces. “There is only one direction the chicken industry should be heading: The doors need to keep widening, not closing.”