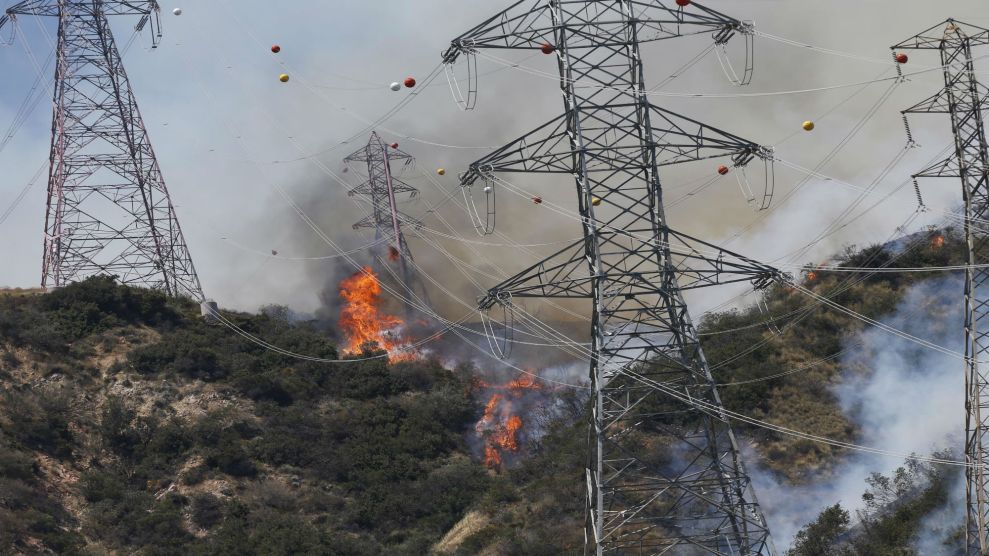 This story originally appeared on the Huffington Post and is reproduced here as part of the Climate Desk collaboration.

Deadly, record-breaking heat and wildfires sweeping across the Southwestern US are a clear sign of manmade climate change at work, scientists say.

Triple-digit temperatures began scorching Nevada, California, Arizona, Utah and New Mexico early this week. Some of the most intense heat was recorded throughout Arizona, where four hikers died in separate heat-related incidents.

On Sunday, the National Weather Service announced temperature records for that calendar day in Yuma at 120 degrees, Phoenix at 118, Tucson at 115 and Flagstaff at 93, NOAA spokeswoman Maureen O’Leary told The Huffington Post. Tucson’s heat tied for the third hottest day every recorded in the city.

Michael Mann, a leading climate scientist and professor of meteorology at Penn State University, was in Phoenix on Friday when temperatures hit 106 degrees. He was speaking at a Democratic National Platform committee meeting, where he pointed to the extreme weather as “an example of just the sort of extreme heat that is on the increase due to human-caused climate change,” he told HuffPost.

“The likelihood of record heat has already doubled in the US due to human-caused warming,” he said, “and that’s just the tip of the proverbial iceberg.”

Daily records were also set in California, where Burbank reached 109 degrees and Palm Springs soared to 119.

The high temperatures are fueling multiple wildfires in the region. The live wildfire tracker from Climate Central below shows a cluster of orange dots where fires are currently burning. You can click on each one for more information.

The high temperatures have hampered firefighters’ efforts to put out blazes that started before the heat set in. In New Mexico, the North Fire has grown to cover over 36,000 acres, while the Dog Head Fire southeast of Albuquerque has encompassed nearly 18,000 acres. The Sherpa Fire in Santa Barbara County has spanned nearly 8,000 acres near Santa Barbara, California.

“Given dry conditions, the heat all goes into raising temperatures…initially drying things out even more and increasing wild fire risk,” Kevin Trenberth, a distinguished senior scientist at the National Center for Atmospheric Research, said in an email to HuffPost.

Wildfires thrive on land that is already tinder dry. While the region had a wetter than normal winter thanks to El Niño, drought conditions have persisted throughout the West since 2011.

There’s no question about whether these temperatures and fires are a result of manmade climate change, Trenberth said. While heatwaves are a normal weather event, climate change exacerbates the conditions. He calculated that the added heat from global warming is equivalent to “running a small microwave oven over every square foot, at full power for 6 minutes, for every month of drought conditions” in the affected region.

“So what used to be a regular heat wave now has extra oomph, and the danger is not just heat” but also wildfire risk, he said.

Barring serious changes to international energy policy, we can expect this heat to become the new normal in less than 50 years, Mann warned.

“If we continue with business-as-usual burning of fossil fuels,” he said, “by mid-century what we think of as extreme summer heat today will become a typical summer day.”