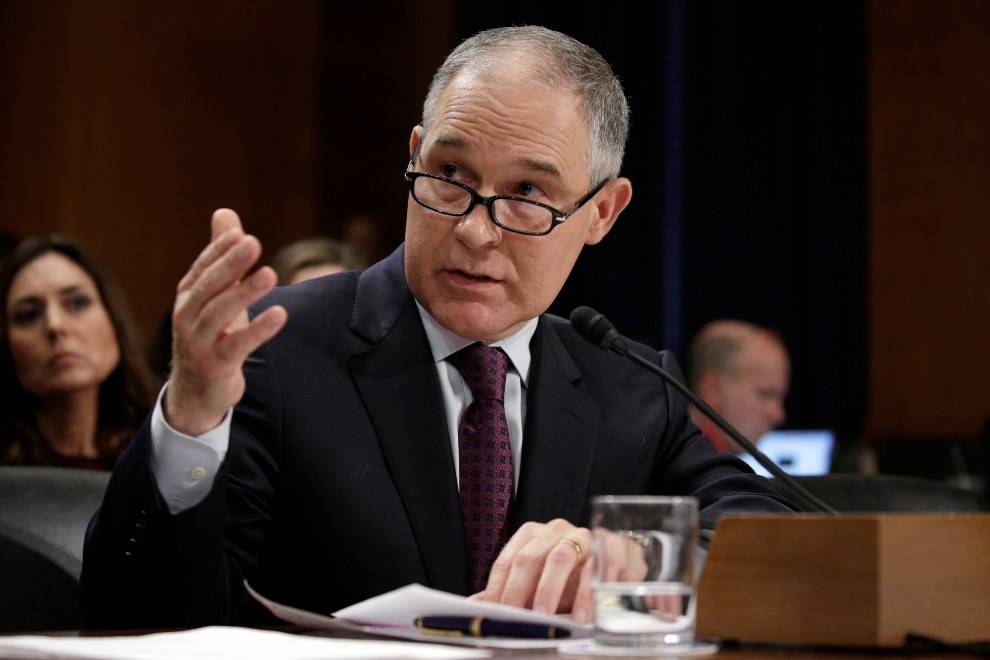 The close relationship between Scott Pruitt, the new administrator of the Environmental Protection Agency, and fossil fuel interests including the billionaire Koch brothers has been highlighted in more than 7,500 emails and other records released by the Oklahoma attorney general’s office on Wednesday.

The documents show that Pruitt, while Oklahoma attorney general, acted in close concert with oil and gas companies to challenge environmental regulations, even putting his letterhead to a complaint filed by one firm, Devon Energy. This practice was first revealed in 2014, but it now appears that it occurred more than once.

The emails also show that American Fuel and Petrochemical Manufacturers, an oil and gas lobby group, provided Pruitt’s office with template language to oppose ozone limits and the renewable fuel standard program in 2013. AFPM encouraged Oklahoma to challenge the rules, noting: “This argument is more credible coming from a state.” Later that year, Pruitt did file opposition to both of these regulations.

The letters also show the cozy relationship between Pruitt and the American Legislative Exchange Council (Alec), the influential US lobbying network of Republican politicians and big businesses, and other lobby groups sponsored by the Koch brothers, the billionaire energy investors who have spent decades fighting against environmental regulation.

Alec has consistently challenged the science on climate change and fought against tougher environmental regulation. Companies including Google, Ford and Enterprise Rent-a-Car have quit Alec in protest of its climate change activities.

The emails contain correspondence between Pruitt’s executive assistant and Amy Anderson, Alec director and Oklahoma membership contact, about Pruitt’s appearance at a May 2013 Alec board meeting in Oklahoma City.

The emails state that Pruitt spoke “on state primacy in oil and gas regulation and the EPA’s sue & settle modus operandi”. The lunch meeting was sponsored by Koch Industries, a major Alec sponsor.

Pruitt was congratulated for his work on pushing back against the EPA by another Koch-backed pressure group.

“Thank you to your respective bosses and all they are doing to push back against President Obama’s EPA and its axis with liberal environmental groups to increase energy costs for Oklahomans and American families across the states.”

“Thank you to your respective bosses and all they are doing to push back against President Obama’s EPA and its axis with liberal environmental groups to increase energy costs for Oklahomans and American families across the states,” said one email sent to Pruitt and an Oklahoma congressman in August 2013 by Matt Ball, an executive at Americans for Prosperity, a nonprofit group also funded in part by the Kochs. “You both work for true champions of freedom and liberty!” the note said.

Last week, an Oklahoma judge ordered that emails from a January 2015 open records request be released by Tuesday. A further batch of emails is due to be turned over next week. The Center for Media and Democracy, which has made nine separate open records requests for Pruitt’s emails, said it will attempt to obtain all of the sought-after communications without exceptions.

Pruitt was confirmed as EPA administrator on Friday. Democrats had sought to delay the Senate vote until the emails were released but were unsuccessful.

“The emails show a very cozy relationship between Pruitt’s office and particularly Devon Energy, as well as other coal, oil and gas companies,” said Nick Surgey, research director at the Center for Media and Democracy.

“Pruitt is the world’s top environmental regulator now and these emails raise serious conflict of interest concerns. He has very close ties to fossil fuel firms and has shown himself to be generally opposed to the rules the EPA has to protect the environment.”

Pruitt’s appointment as EPA chief has been vigorously opposed by environmental groups, Democrats and even some EPA staff as antithetical to the agency’s mission. More than 700 former EPA employees wrote to senators to urge them to vote against Pruitt, while some current staff in Chicago took part in protests against him. This effort did little to budge the mathematics of the Senate, with only one Republican, Susan Collins of Maine, voting against Pruitt.

Following the confirmation, the EPA put out a press release listing those that “cheer” Pruitt’s appointment. They include Republican representatives and lobbyists for mining, farming and grazing, who were quoted in the EPA’s own release calling the agency “rogue” and “one of the most vilified agencies in the ‘swamp’ of overreaching government”.

The former Oklahoma attorney general, a Republican, has described himself as a “leading advocate against the EPA’s activist agenda” and sued the regulator 14 times over pollution regulations relating to mercury, smog, methane and sulfur dioxide. Fossil fuel companies or lobbyists, a frequent source of Pruitt’s past donations, joined with him in 13 of these cases against the EPA.

A staunch opponent of what he sees as federal overreach, Pruitt said following his appointment that “citizens don’t trust the EPA is honest” with its scientific work, particularly around climate change. Pruitt has said he accepts the planet is warming but has questioned the degree of human influence over this, despite the volumes of scientific literature on the impact of greenhouse gases.

In his first speech at EPA headquarters in Washington on Tuesday, Pruitt praised career employees and promised to “listen, learn and lead”. He said regulators such as the EPA “ought to make things regular. Regulators exist to give certainty to those that they regulate.”

He added: “I believe that we as a nation can be both pro-energy and -jobs, and pro-environment. We don’t have to choose between the two.”

John O’Grady, an EPA environmental scientist and head of a union that represents 9,000 agency staff, said that Pruitt came across “very professionally and conciliatory, he didn’t come out heavy handed”.

But O’Grady said that many staff are nervously waiting for the administration’s agenda to unfold, with Donald Trump expected to sign executive orders that aim to do away with the EPA’s effort to reduce greenhouse gases and regulate America’s expanse of waterways.

“Mr Pruitt isn’t a proponent of addressing climate change or of a strong EPA, so it won’t surprise me when they start to whittle away at what we do as an agency,” O’Grady told the Guardian. “I’m wondering when the hammer is going to fall.”