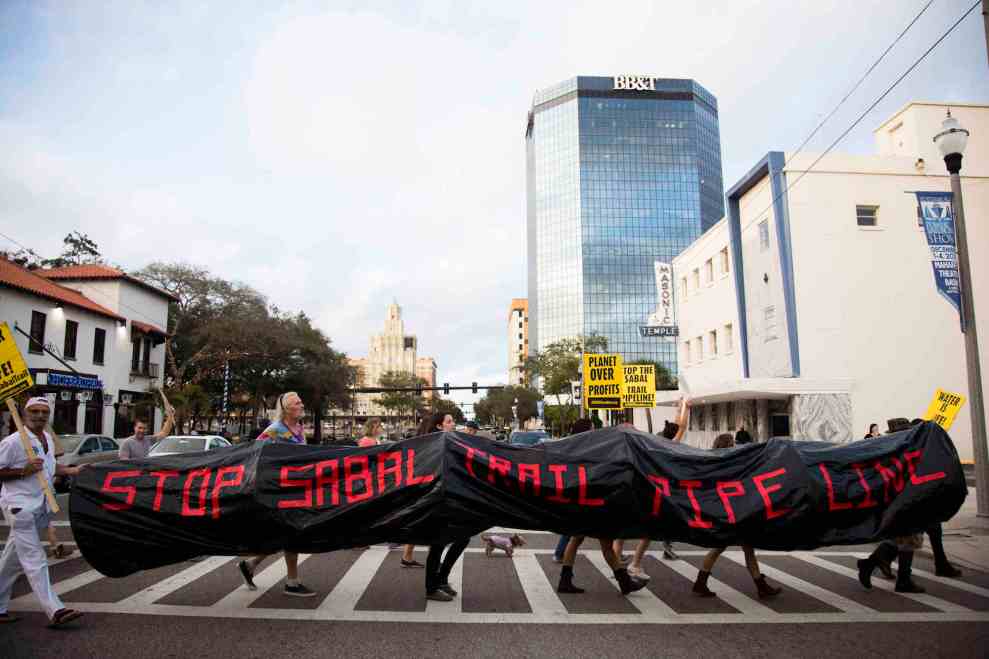 At 2 pm local time on February 22, police started forcing out protesters from an encampment in Standing Rock, North Dakota, who had been trying for months to block the completion of Dakota Access Pipeline (DAPL). Though the water protectors won multiple victories stalling construction during their multi-month stand, in late January President Donald Trump announced executive actions calling for expedited construction of the highly contentious pipeline project, owned by Energy Transfer Partners. Trump’s decision, which also streamlined the permitting process for the once defunct Keystone XL pipeline, spelled emphatic support of large-scale oil and gas projects, the type of which are expected to increase under his administration.

The rush to build massive pipelines began before the election of President Trump, spurred in part by Congress’s repeal of a 40-year-old ban on oil exports in December 2015 (backed by then-President Barack Obama). Even before that decision, the United States was already the world’s largest exporter of diesel, gasoline, and aviation fuel, and a net exporter of coal. With a glut of oil and gas discoveries in the Marcellus, Barnett, and Bakken shale formations, an increase in American large-scale fossil fuel production has long been in the works and is expected to flourish in the coming years. Pipeline construction will likely expand under President Trump’s new infrastructure plan; maps of pending projects for crude oil, natural gas, and natural gas liquids show just how extensive this development will be. And the rollback of environmental regulations will only encourage new construction. “It is the policy of the executive branch to streamline and expedite,” Trump announced in his executive order on pipelines. 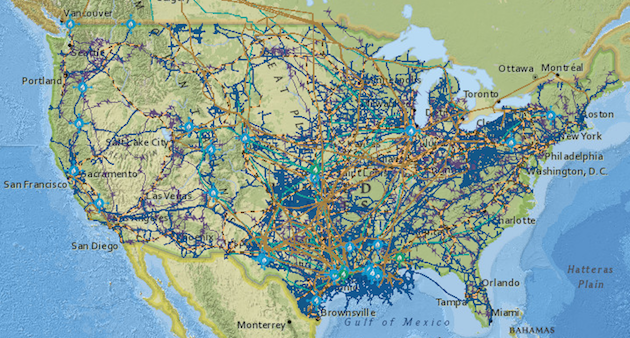 A map of all current US oil and gas pipelines and market hubs. US Energy Information Administration

Even though protesters didn’t ultimately stop the completion of DAPL, don’t expect the resistance movements to go away quietly. Native and environmental activists are now taking the lessons and tactics learned at Standing Rock and applying them across the country, gearing up to battle big pipeline projects in their own backyards.

Here are eight new oil and gas pipeline projects in the works:

Trans-Pecos pipeline: Another Energy Transfer Partners production, the Trans Pecos is 148 miles of highly contested line slated to cross the Rio Grande River through Big Bend, hallowed ground for many Texans. Coming with a $770 million price tag, the pipeline will carry 1.4 billion cubic feet of fracked natural gas daily to Mexico for industrial use and power generation. Construction began in May, and is now nearing completion, with an estimated 93 percent of the line already in place.

But groups like the Big Bend Conservation Alliance continue to voice strong concerns about how the pipeline could threaten undeveloped stretches of wilderness, while contributing little to local communities. The Society of Native Nations, a subgroup of the American Indian Movement, has established the Two Rivers Camp near the construction site, where protesters, some traveling directly from Standing Rock, are camping out, endeavoring to stymie completion by locking themselves to construction equipment.

Bayou Bridge pipeline: Another ETP joint, the Bayou Bridge Pipeline, a $670 million project, will run 162 miles connecting an oil hub in Nederland, Texas, with refineries in St. James parish in Louisiana. The pipeline will also cross through the country’s largest wetland (931 square miles), jeopardizing the watershed and the livelihood of hunters and fishermen who have relied on the land for generations, as well as the water supply of the indigenous United Houma Nation. Opposition from protesters reached a fever pitch on February 9 when a natural gas pipeline owned by Phillips 66 (a 40 percent stakeholder in the Bayou Bridge) blew up in St. Charles Parish, killing one worker and resulting in a fire that took four days to finally extinguish.

Environmental advocates urged the Louisiana Department of Environmental Quality to refuse to issue the remaining permits still needed for Bayou Bridge to be completed. During public comment, Louisiana resident Cherri Foytlin, director of the environmental advocacy group Bold Louisiana, noted that “Energy Transfer Partners came here to talk about energy independence and how this is supposed to be for ‘our people.'” Yet, she noted, the company’s SEC filings denote the Nederland, Texas facility as an “export project” meant to “balance the market by 2018,” a reference to the low price of domestic crude oil. Bayou Bridge remains in the permitting process, per the US Army Corps of Engineers website.

Mariner East 2 pipeline: A $2.5 billion natural gas liquids pipeline being built by Sunoco Logistics, a subsidiary of ETP, the Mariner East 2 was permitted on February 15, amid outcry from environmental groups. The 20-inch pipeline will move 275,000 barrels of propane, butane, and ethane 306 miles from the Marcellus Shale in Pennsylvania, Ohio, and West Virginia to a processing facility near Philadelphia. The permits allow for water crossing and earth moving, which environmentalists claim will deforest more than 1,500 acres and cross hundreds of streams and aquifers used for farmland. While construction is already underway, Mariner East 2 still needs Army Corps of Engineers permits to legitimize its plans to drill horizontally beneath navigable waterways, and is mired in a series of legal appeals from environmentalist over the permits its currently holds.

Sabal Trail pipeline: Commonly called “Florida’s Dakota Access pipeline,” Sabal Trail is a $3 billion project totaling 515 miles. The pipeline, authorized by the Federal Energy Regulatory Commission in February, will carry fracked natural gas from eastern Alabama to Florida. It is a joint endeavor of NextEra Energy, Duke Energy, and Spectra Energy, the last of which was purchased for $28 billion in September by Enbridge, a co-investor in the Dakota Access Pipeline. Opponents have expressed concern about the threat posed to local waterways, as drilling mud has already leaked into the Withlacoochee River in south Georgia. They’re also concerned about the health of the Floridian aquifer, one of the nation’s largest freshwater aquifers which is encased in fragile limestone.

According to Spectra Energy spokesperson Andrea Grover, the pipeline is already 78 percent complete, and reports indicate that it will be fully operational by June. Opponents recently called on Senate Democrat Bill Nelson to acknowledge a petition with 98,000 signatures opposing the pipeline. On February 22, two protesters lodged themselves in the pipe in an attempt to halt construction.

Diamond pipeline: The $900 million project will consist of 440 miles of 20-inch pipe, shipping 200,000 barrels per day of crude oil from Cushing, Oklahoma to Memphis, Tennessee. Fear that the pipeline will interfere with burial sites of those killed during the Trail of Tears, which is alongside the pipeline’s route, Native activists have founded the group #NoPlainsPipeline. Per cofounder Ashley McCray: “It’s very disrespectful to disturb those remains even if it’s just jewelry or even if it’s clothing—to interfere with that spirit passing on to the next world really does a lot, spiritually, to our people.”

The Little Rock, Arkansas branch of the Army Corps examined 491 water crossings along the pipeline’s proposed route, approving 443 in May while deeming the others to be permit-exempt or beyond their jurisdiction. Environmental and Native groups Bold Oklahoma, the American Indian Movement, and #NoPlainsPipeline have teamed up to fight the pipeline, promising to create a Standing Rock style encampment in Oklahoma. Already, protests over the Valero owned project have led to twelve arrests in Arkansas.

Atlantic Sunrise pipeline: The $3 billion expansion of the Transco natural gas transport system, Atlantic Sunrise will add roughly 200 miles of new pipe conveying fracked natural gas from the Marcellus Shell in Pennsylvania to a liquid natural gas shipping hub in Maryland and as far south as Alabama. The project has faced fierce opposition from local residents in Pennsylvania, where protesters were arrested for trespassing in anti-pipeline demonstrations as early as January 2015.

Atlantic Sunrise has now cleared all regulatory hurdles, but activists are ramping up their opposition. Mark Clatterbuck, founder of the environmental group Lancaster Against Pipelines, helped initiate a DAPL-style encampment on an Amish farm in Lancaster County, which sits in the path of the planned pipeline. With eminent domain hearings recently underway, the farm will likely be a target for expropriation. The group is gearing up for a long battle, and, borrowing from techniques learned at Standing Rock, promising to stand pat until the pipeline has been defeated.

Pacific Connector pipeline: This proposed 232-mile pipeline will transport 1 billion cubic feet of natural gas per day from central Oregon to a terminal in Coos Bay, where it will be liquefied and exported to Asian markets. After two denials, the Federal Energy Regulatory Commission accepted the pre-filing application on February 10. Sixty percent of the pipeline would reside on public and timberland, with the remaining 40 percent crossing privately held land.

The Karuk, Yurok, and Klamath tribes all voiced their opposition to the project in November. “With our fisheries and water quality already compromised, we simply cannot afford the risks associated with running a natural gas pipeline beneath the Klamath River,” said Karuk Chairman Russell ‘Buster’ Attebery.

Agua Prieta pipeline: The line—a project of Sempra Energy—will transport gas from Arizona to the Mexican states of Sonora and Sinaloa. However, the construction plans were ratified without consent from the indigenous Yaqui tribe, who are currently protesting its crossing of their water source, Rio Yaqui. Protests have been particularly violent, and one protester was shot and killed during a clash in late October. In December the tribe’s lawyer, Anabela Carlon Flores, and her husband were kidnapped by masked gunmen of unknown origins and held for days before eventually being released.