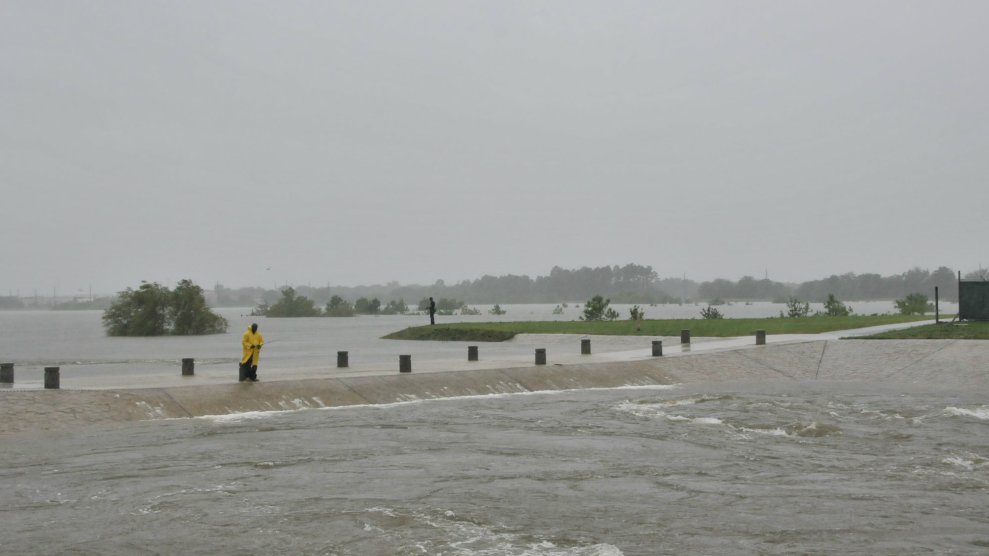 The water from the Barker reservoir flooding into a park.Liu Liwei/Xinhua via Zuma

Addicks and Barker Reservoirs are swaths of placid Texas prairie, wetland, and forest straddling I-10 where it hits Highway 6, about 20 miles west of downtown Houston. But that’s not how nature sees them. To nature, those two open spaces are the top of a hydrological basin that drains through the city and into the Houston Ship Channel.

Most of the time the reservoirs don’t reserve any water. But when it rains and rains and rains, they fill up, letting water burble through their gates into Buffalo Bayou and out toward the sea, to control flooding.

Today, after five days of rain thanks to Hurricane Harvey, Addicks and Barker Reservoirs are as full as full can be. Houses both upstream and down are sitting in feet of water. Believe it or not, that’s how things are supposed to work. The question is whether Houstonians and the Corps are seeing the edge of the dams’ design envelope. Don’t worry, for a moment, about 100-year storms and 500-year storms. Dam builders worry about a different standard: the Probable Maximum Flood.

Don’t worry, for a moment, about 100-year storms and 500-year storms. Dam builders worry about a different standard: the Probable Maximum Flood.

The PMF is basically the answer to a math problem. (The World Meteorological Organization’s manual for calculating Probable Maximum Precipitation, a necessary precursor, clocks in at a not-easy-to-digest 291 pages, but it’s also in several languages, so that’ll cut your time down.) Basically, hydrologists try to figure out the absolute largest amount of water that could ever come shooting down a watershed, based on storm size and ground characteristics. It’s supposed to be a more deterministic calculation for how tough to build a dam, let’s say, than the probabilistic whatever-year storm size. “The thing I’ve heard it equated to,” says Tina Stannard, a water resources engineer at the engineering firm Freese & Nichols, “is a one-in-10,000 year event.”

Those two Houston reservoirs are full to bursting, thanks to Harvey. That event might have been the big one—but it’ll take some math to know for sure.

In 1935 a thunderstorm dropped 16.5 inches of rain—flooding Buffalo Bayou (and therefore Houston) and killing eight people. So the US Army Corps of Engineers stepped in, acquiring the land that’d become the reservoirs. The Corps started building. By 1948, Barker’s irregular trapezoid was surrounded by 72,000 feet of earthen dam on its downstream sides, 36 feet high, and Addicks’ irregular triangle left a scraggly, fractal hypotenuse open upstream and dammed the rest with 61,000 linear feet of dirt almost 50 feet tall at its highest.

Probable Maximum Flood didn’t come into use as a standard until the 1970s. Today, some but not all dams are built to withstand it. Right now, the Corps and others are working to figure out what percentage of the PMF that Harvey reached—and modeling how much water actually came into Houston and the reservoirs. (Corps spokespeople didn’t return requests for comment, but to be fair they’ve been busy.)

By the late-2000s the Corps had rated both Houston reservoirs’ dams and spillways as “extremely high-risk” infrastructure—in part, at least, because the consequences of a failure would be so high. Houston had metastasized since 1948, sending out tendrils and clots of housing and malls where unpaved ground used to absorb rain. And lots of that new construction was in the nominal path of the putative water that’d hypothetically rush downstream from the dams after a theoretical breach.

Better to release a little water at a time into Buffalo Bayou and retain the rest than have it all go at once. So in 2015 the Corps of Engineers paid Granite Construction $72 million to upgrade the spillways. They were supposed to be done in 2019.

And then came Harvey. “When that first level of spillway gets overwhelmed, you start storing more and more water behind the reservoir, but at some point you have to release that water because you do not want it to overtop the dam,” says Mark Ogden, a technical specialist with the Association of State Dam Safety Officials.

“Overtopping” is the failure mode. “It’s an earthen embankment, a dirt cross section,” Stannard says. “If water flows uncontrolled over the top, it can erode away the dirt and cause the whole dam to fail.” As of Wednesday night, Addicks had 178,000 acre-feet of water behind its dam, and Barker had almost 170,000. You don’t want all of that hitting the city at once.

The reservoirs filled to record levels. Water got to 109 feetabove sea level at Addicks. Areas on the upstream side of the reservoirs flooded. But of course a large release of water from the reservoirs means downstream flooding along Buffalo Bayou, too. “The operation is then a balancing act between how much water you release versus how much you store to keep from overtopping,” Ogden says.

“It’s an earthen embankment, a dirt cross section,” Stannard says. “If water flows uncontrolled over the top, it can erode away the dirt and cause the whole dam to fail.”

So the Army Corps of Engineers opened the floodgates. Just a little at first, a few hundred cubic feet of water per second, and then wide—7,500 cfs from Barker and 6,300 cfs from Addicks, looking to go up to 8,000 cfs from both later in the week. And the rest of the city is draining into Buffalo Bayou, too. Thousands of houses are flooded. That number might reach 100,000.

Houston has been worried about the reservoirs for years. Back in 2012 the local Houston Press did a disaster-gonna-get-us story about them; last year ProPublica published a prescient article about the possible damage a hurricane could do to Houston, faulting the Army Corps of Engineers and policymakers for not better managing the floodplain. The Atlantic attributed Houston’s current plight to much the same—misguided or insufficient attempts to engineer away the problem of urban sprawl across a vast watershed prone to hurricanes.

So the question is, are the at-capacity reservoirs experiencing the PMF? Even if the calculation had been around in the 1940s, today’s watershed might have changed since the dams were built. Did climate change make Harvey worse than it might have been? Probably, but Katrina and Sandy were both “100-year storms,” and Harvey has been called a “500-year storm.” Probabilistically those shouldn’t have all happened in just a dozen years. And in Houston, all that new pavement means water runs off the ground faster instead of percolating downward, further changing the watershed’s characteristics.

Hydrologists might not yet know what percentage of the PMF Harvey hit, and the PMF itself might be getting bigger. Maybe no amount of drains, dikes, levees, reservoirs, and canals could deal with that. Houston’s history is one of engineering solutions to the problem of getting stormwater out of town. Maybe new kinds of storms will require different kinds of management. An actual 10,000-year storm might not be the kind of problem anyone can engineer their way out of.