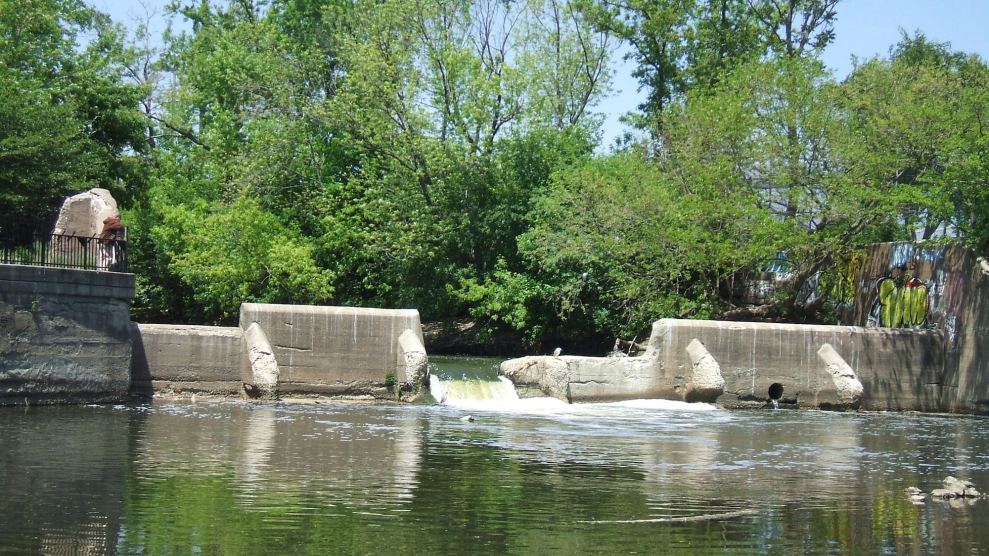 At the south end of the North Shore Channel, the North Branch of the Chicago River flows over a small dam into the confluence.Mudwater/Wikimedia Commons/Creative Commons

It’s hard to chase waterfalls in the city of Chicago. Although there is a smattering of decorative cascades—Stearns Quarry Park, for example, has a water feature made out of recycled sidewalk slabs—there’s only one chute in the city that’s attached to an actual waterway. It’s a four-foot-tall tumble, located right where the north branch of the Chicago River meets the North Shore Channel. Pedestrians can see it by walking through River Park, near the city’s northeast flank.

Soon, though, even the most dedicated seekers will have to stick to the rivers and lakes that they’re used to. As Chicago Tonight reports, the River Park waterfall is being torn down sometime in the next week, because it makes the river impassable for fish.

As DNAinfo details, the waterfall was built back in 1910, after city authorities dug the North Shore Channel and restructured the Chicago River to make it flow away from the city. This caused the water level to drop significantly at the junction, so the city built a dam in order to concentrate the water’s flow and prevent erosion. This dam—also the only one in Chicago—then became the site of “the only ‘overflowing water’ on a waterway in the city,” the outlet reports. (Sometime in the intervening years, a hole was cut in the dam, meaning that when the river level is low, the waterfall is even shorter—it clocks in at about a foot tall.)

Although it did this job faithfully for over a century, there was a downside: The waterfall prevented fish from swimming upstream. As DNAinfo reported in spring of 2017, when the Army Corps of Engineers did a census of the water between the dam and a footbridge a few hundred feet upstream, they found one solitary green sunfish. The plan is to tear down the dam and replace it with a series of three “riffle pools,” small piles of rocks that act like rapids. This will smooth out the elevation change, allowing fish to swim upstream as well as letting canoers and kayakers paddle through without portaging.

While some want to have it their way or nothing at all, many are cheering the change. Margaret Frisbie of Friends of the Chicago River told Chicago Tonight that fish will colonize the upstream area quickly, improving the water quality. This in turn “gets more people out on the river because it feels safer and looks better,” she added.

Think they’re moving too fast? You’d better get out there: The waterfall removal is set to begin within the week.