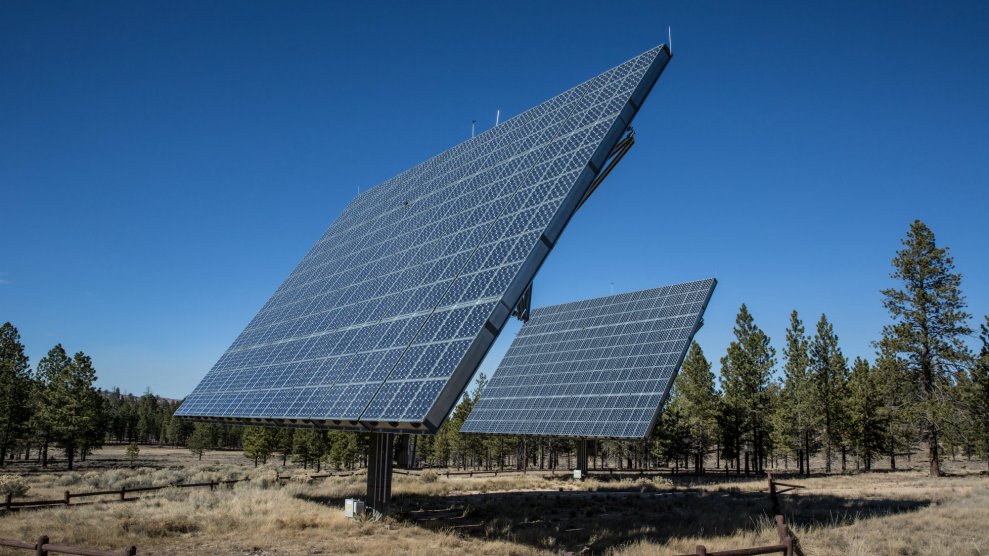 By all accounts, 2018 had its share of big environmental bummers. Scientists calmly explained that our current rate of warming will cause geological changes akin to a meteor striking the Earth. Former EPA chief Scott Pruitt spent thousands of taxpayers dollars on coins, flights, and security booths while overturning and weakening important rules that protected us from dirty air and contaminated water. Brazil got a new president who plans to open up the Amazon for logging. And the United States showed up to a global summit on climate change repping fossil fuels.

Despite all that, I’m here to tell you that this year wasn’t totally terrible. I’m not just saying that to convince myself it’s true! Folks across the country, from local city leaders to state attorneys general, are out there chipping away at the biggest existential threat of our time. And they’re actually getting somewhere. Here’s proof.

Democrats flipped the House in November, and a slew of environmentalists joined Congress. That includes newly elected representative Alexandria Ocasio-Cortez of New York, who spent her first day on Capitol Hill lobbying Nancy Pelosi for something called a Green New Deal. Voters also elected lower-profile climate champions in the midterms, such as Sean Casten. The incoming representative worked in renewables (and used to write for Grist) before flipping his Illinois district.

That’s not all: Climate-friendly Democrats also won big at the state level. In New York, Colorado, Illinois, Maine, New Mexico, and Nevada, they achieved something called a “trifecta”—when one party wins control of the governorship, state Senate, and state House. It’s basically the best situation you can find yourself in as an elected official who actually wants to accomplish something during your time in office.

The midterm elections brought the number of states with blue trifectas from eight to 14. That means new channels for green policy are now available from coast to coast.

Cities said ‘I do’ to clean energy

It’s been a big year for clean energy pledges. The Sierra Club’s Ready For 100 campaign encourages cities to go 100 percent renewable and tracks their progress over time. Since the campaign was established in 2015, 102 cities have joined—and 45 of them, plus Washington, DC, signed on this year alone. Cincinnati, Denver, and Minneapolis are among the trailblazers paving the way for a greener planet.

Many of these cities are aiming to make good on their clean energy promises by 2030 or even earlier! That’s a pretty big deal, especially considering that the Trump administration decided to opt out of the Paris Agreement. It’s pretty clear that local leaders across the US are still committed to the goals laid out in that landmark accord.

We wrote about one standout on this list back in May: Abita Springs, Louisiana. The town’s Republican mayor, Greg Lemon, is among a growing wave of conservatives who believe renewable energy and their party’s values actually go hand in hand. He’s a champion of solar-powered street lights, energy efficiency, and sustainability. He’s also against fracking, something that puts him at odds with the town’s two fossil-fuel powered utility companies. Sounds like Lemon is making lemonade out of climate lemons.

You know who else has been courting a greener future? The courts! 2018 has been the year of the climate change lawsuit. Two cities in California let loose with a climate liability lawsuit against major polluters back in 2017, and a bunch of other places have jumped aboard the lawsuit train over the course of this year: Boulder, Colorado; New York City; Richmond, Virginia; King County, Washington; the state of Rhode Island; and most recently, Baltimore.

These lawsuits generally seek to pin liability for climate change on major polluters, using the fact that Exxon et al. knew about the dangers posed by climate change for decades and purposefully misled the public about it. Exxon has been fighting back against the charges tooth and nail, but cities and counties keep filing new suits anyway.

Some of these suits take a different tack. Exxon is being sued by at least one city (the Big Apple! Heyo!) for climate fraud—that is, misleading investors about how climate change is likely to affect the company’s economic future. And in another first-of-its-kind lawsuit, a bunch of commercial fishers from the West Coast are suing 30 oil companies for contributing to climate change and disrupting the oceans. Apparently, rising temperatures are affecting all kinds of people and livelihoods. Who woulda thunk it?

We dreamed of a greener House

2018: Year of the Carbon Tax? Well, almost. So far, there aren’t any existing carbon taxes in the United States, but momentum to pass one grew significantly this year at the federal and state levels.

Members of the Climate Solutions Caucus—a bipartisan group in the House of representatives—proposed not one but two carbon pricing schemes. First, Carlos Curbelo, a Republican caucus member from Florida, proposed a price on carbon this summer. It quickly failed, and Curbelo lost his seat in the midterm elections soon after.

Then in the fall, Florida Democrat Ted Deutch, another caucus member, helped shepherd a revenue-neutral carbon tax into Congress. (That’s a tax that gets returned to Americans in the form of a check every year.) It’s the first bipartisan climate legislation on Capitol Hill in a decade, but it has pretty much ZERO chanceof surviving a vote in the GOP-controlled Senate. Deutch and the bill’s fellow cosponsors say they’ll reintroduce the tax in the next Congress.

Capitol Hill isn’t the only place where environmental taxes are getting bandied about. Democrats and enviros in the state of Washington have been trying to push a carbon tax through for years now. Their most recent attempt, the culmination of years of hard work with labor organizations and groups representing communities of color, failed on the ballot in November. But down in Oregon, a green tax had better luck. Voters passed the Portland Clean Energy Initiative, which will tax huge retailers to raise $30 million a year for renewables and clean energy job training.

All these efforts tell us something: The folks pushing green taxes aren’t afraid to keep trying.

Here’s another good news trend for ya—companies that want to build massive oil and natural gas pipelines ran into some roadblocks this year.

Activists have been protesting TransCanada’s Keystone XL pipeline project, which would run from Canada to Nebraska, for decades. When President Trump made good on one of his campaign promises by approving the project in his first months in office, folks feared their efforts had been in vain. Not so fast! Federal Judge Brian Morris, appointed by Obama, ruled in November that Trump had failed to consider climate change when he approved the pipeline. The administration has to come up with a new environmental analysis that considers how the pipeline will affect the planet before the project can start moving again.

In September, work on the Bayou Bridge Pipeline in Louisiana was temporarily halted thanks to a lawsuit by three local landowners. The company behind the project, Energy Transfer Partners, wanted to complete construction by October, but the courts pushed that schedule back. While the landowners ended up losing their lawsuit, these three good Samaritans have promised to appeal the ruling.

Look, I’m not saying these developments necessarily indicate a sea change in the way energy companies decide to do business. But environmental activists and finicky markets are making pipelines more and more of a gamble these days. That means a world with fewer pipelines could be on the horizon.

Divestment? You got it. Students led the charge in 2018 to get their academic institutions to quit putting money in fossil fuels. Most recently, Harvard faculty and students petitioned the administration to divest its $39.2 billion endowment from dirty fuels. And in early December, Yale students staged a sit-in to protest the university’s investments in Big Oil and fracking companies. Dozens of students were arrested during the protest, including this author’s little brother.

This trend isn’t cloistered in Ivy League institutions. The entire Republic of Ireland is divesting! A bill passed with all-party support in July compels the country to sell off its investments in coal, oil, peat, and gas ASAP, making Ireland the first nation on earth to pull its assets out of fossil fuels. Ireland wields an $8 billion national investment fund (not exactly on par with Harvard’s endowment, but every bit counts!).

For another sign that this whole divestment thing isn’t going away anytime soon, look to New York City. The Big Apple spent this year figuring out how to divest the $194 billion it has stored in pension funds from fossil fuels by 2022. That’s no small feat, considering this is one of the biggest pension funds in the United States.

It was the divest of times, it was the worst of times, but at least we had six good things to celebrate in 2018.