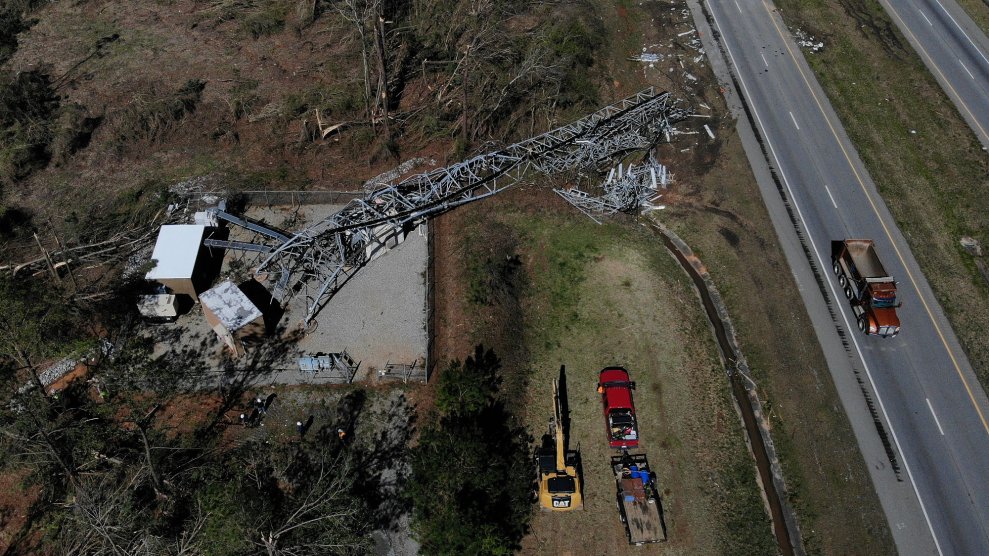 An aerial view of a cellphone tower that was knocked down by a tornado in Smiths Station, AlabamaAlex Wong/Getty Images

A spate of tornadoes ravaged Alabama on Sunday and left at least 23 people dead, ranging in age from 6 to 89 years old. First responders are still sorting through the wreckage, and close to 100 people are recovering from injuries sustained in the deadly storms, which a local sheriff described as if someone “took a giant knife and just scraped the ground.”

As emergency managers and local officials scramble to contain the damage, here’s what you need to know:

This was not just one storm, but eight

The storm commanding the most attention—a 170 mph twister that destroyed dozens of homes and businesses across roughly 30 miles of Lee County—was not the only tornado that hit Alabama. The National Weather Service tracked seven other storms across the state on Sunday, including one that crossed the border into Georgia, where it also produced damage, according to the NWS. Severe weather associated with the tornadoes also affected Louisiana, Mississippi, Florida, and South Carolina.

The most dangerous storm by far struck rural pockets of Lee County, which is one of the more urban counties in the state and that includes the campus of Auburn University. Sunday’s 27-mile-long tornado has already killed nearly two dozen people, exceeding the combined total of all tornado-related deaths from last year, according to a database maintained by the NWS’s Storm Prediction Center.

Among the dead were seven members of one family, the Alabama Media Group reported.

Trump asked FEMA to give Alabama “A Plus treatment”

In contrast to states like California, where Donald Trump has threatened to withhold aid after a horrific wildfire season, the president tweeted Monday that Alabama should receive the “A Plus treatment” from the Federal Emergency Management Agency.

FEMA has been told directly by me to give the A Plus treatment to the Great State of Alabama and the wonderful people who have been so devastated by the Tornadoes. @GovernorKayIvey, one of the best in our Country, has been so informed. She is working closely with FEMA (and me!).

FEMA, which is part of the Department of Homeland Security, does not currently have a permanent director. Its last director, Brock Long, resigned in February after being accused of misusing department vehicles. In response to the recent storms, FEMA has already sent staffers to assist state emergency management officers in Alabama, a department spokesperson told USA Today.

The impact from tornadoes has generally been getting worse

The Lee County twister is the deadliest on record since an Oklahoma storm killed 24 people in 2013. It may also be a harbinger of even more damaging storms to come. The problem, researchers from Villanova University and Northern Illinois University detailed in 2016, is increasing development and population growth in “at-risk” areas. The result could be “average annual tornado impacts” that are projected to be “6 to 36 times greater in 2100 than 1940.”

Stephen Strader, one of the researchers behind the 2016 study, noted on Twitter this week that the storm primarily affected areas in rural Alabama with a preponderance of mobile homes. “Bad situation with already many fatalities,” he said. “I suspect many of these occurred in mobile homes.”

In fact, there is no scientific consensus on how climate change affects tornadoes, though generally, global warming is believed to make extreme weather events—from hurricanes to cold snaps—more deadly for reasons that do not necessarily apply to tornadoes. “No known scientific studies have established a cause-and-effect relationship between tornadoes and climate warming,” E&E News reported Tuesday. “But scientists do say they are witnessing macro-scale changes in tornado frequency and variability across the United States.” The site noted that “in the 1980s, tornadoes damaged an average of nine counties per year,” but between 2007 and 2016, “tornadoes damaged an average of 21 counties annually.”