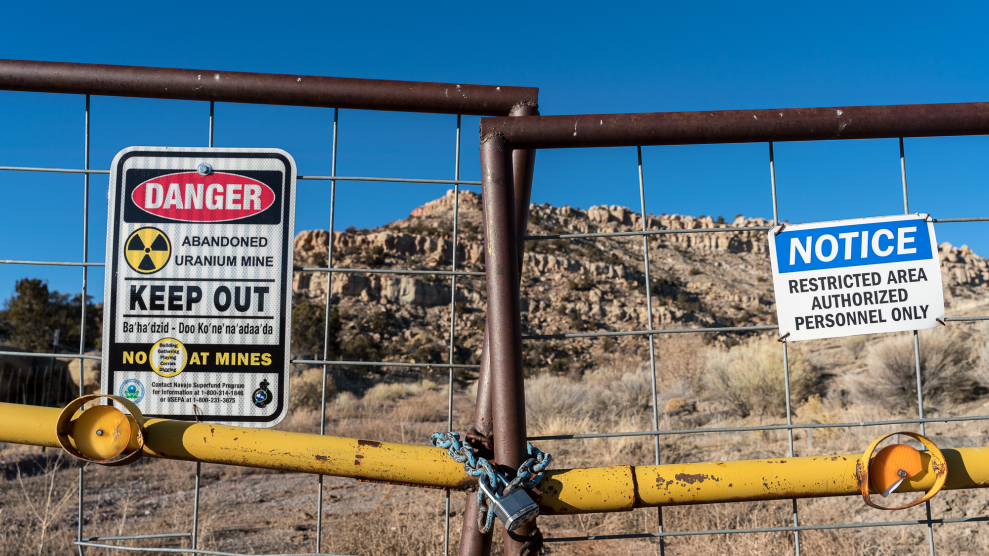 Signs on the gates of an abandoned uranium mine in Red Water Pond, Navajo Nation. Washington Post/Getty

On Thursday morning, Secretary of Energy Dan Brouillette announced “an array of policy options to restore America’s leadership in nuclear energy” by reducing the nation’s dependence on foreign uranium suppliers. Compiled by the Nuclear Fuel Working Group over the past nine months, the recommendations amount to a thinly veiled exercise in crony capitalism: streamlining the permitting process for uranium mining on public lands, creating a new federal uranium reserve, and allocating $150 million per year to stock that reserve with domestically mined uranium.

According to the Department of Commerce, importing uranium from countries like Russia and Kazahkstan “creates strategic vulnerabilities to both our economy and military.”  This logic, echoed by the Department of Energy’s announcement and recent statements by Republican lawmakers, implies that foreign adversaries could exploit US reliance on their uranium to disrupt our production of nuclear energy and weapons.

As I previously reported, uranium mining creates grave risks for rural communities across the US, and nuclear experts have serious doubts about the national security benefits of ramping up domestic uranium production:

[E]xperts point out that the United States already has large stockpiles of uranium, and that most nuclear energy producers are in long-term contracts with countries that mine it more cheaply. And while the United States does import uranium from old adversaries like Russia and Kazakhstan, Gabrielle Hecht, a professor of nuclear security at Stanford, points out that over half of imports come from Canada and Australia, close allies that could “easily” fill domestic needs if other countries were to cut off supply. “What I think is really going on here is that these companies want the government to help them compete against foreign companies,” Hecht tells Mother Jones. “There’s no sense in which uranium supply is a national security issue.”

The ad hoc Nuclear Fuel Working Group was convened by President Trump last July, after the Department of Commerce declined to act on a request from two domestic mining companies, Ur-Energy and Energy Fuels. The companies wanted quotas requiring US nuclear energy companies purchase 25 percent of their uranium from domestic suppliers. This week’s report, which was applauded by Ur-Energy and Energy Fuels, stated that US uranium miners and nuclear energy companies were at “high risk of insolvency.” It’s true that in recent years nearly all US mines were “mothballed” because domestic uranium cannot compete with the low cost of imports.

But after the industry began lobbying the Trump Administration, Ur-Energy said it anticipated “an improving uranium market.” They secured a federal permit to double the surface area of its Lost Creek Mine in southern Wyoming. Canadian companies like Cameco and Azarga are currently waging protracted regulatory battles to expand and create mines in South Dakota and Nebraska despite local opposition.

Geoff Fettus, a senior attorney for the Natural Resources Defense Council, countered that the Trump administration’s recommendations are actually designed to “prop up” a “dirty, dying industry” by presenting “a wasteful solution in search of a problem.”