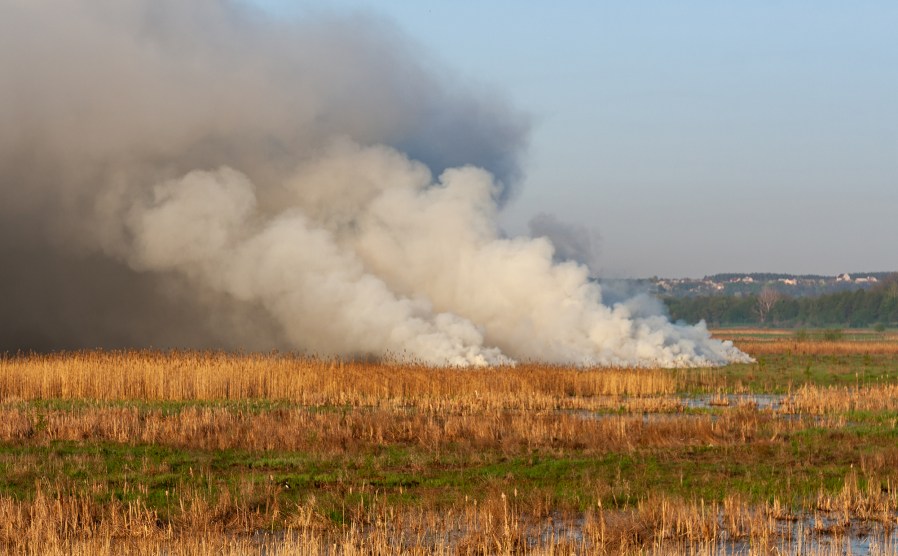 Peat fires will get more frequent with hotter summers and melting ice.Khosrork/iStock/Getty Images

Each winter, as snow blankets Alaska and northern Canada, the wildfires of the summer extinguish, and calm prevails—at least on the surface. Beneath all that white serenity, some of those fires actually continue smoldering underground, chewing through carbon-rich peat, biding their time. When spring arrives and the chilly landscape defrosts, these “overwintering” fires pop up from below—that’s why scientists call them zombie fires.

Now, a new analysis in the journal Nature quantifies their extent for the first time, and shows what conditions are most likely to make the fires reanimate. Using satellite data and reports from the ground, researchers developed an algorithm that could detect where over a decade’s worth of fires—dozens in total—burned in Alaska and Canada’s Northwest Territories, snowed over, and ignited again in the spring. Basically, they correlated burn scars with nearby areas where a new fire ignited later on. (They ruled out cases that could have coincided with a lightning storm, as well as ones close enough to people to have been caused by an accidental ignition.) They calculated that between 2002 and 2018, overwintering fires were responsible for 0.8 percent of the total burned area in these lands. That sounds small, but one year stood out: 2008, when a single zombie fire was actually responsible for charring 38 percent of the total burned area.

“They appear more often after hot summers and large fires…right after the snow melts, we already have dry fuel available.”

That kind of outbreak may be a sign of things to come in a rapidly warming Arctic. While 2008 was a notably bad year, it was no fluke. Instead, it was part of a pattern of conditions in which zombie fires are most likely to arise. “They appear more often after hot summers and large fires,” says earth systems scientist Rebecca Scholten of the research university VU Amsterdam, lead author on the new paper. “And indeed, that is something that we could show has increased over the last 40 years.” For example, the particularly active fire years of 2009 and 2015 in Alaska, and 2014 in the Northwest Territories, generated multiple overwintering fires the following spring.

Northern soils are loaded with peat, dead vegetation that’s essentially concentrated carbon. When a wildfire burns across an Arctic landscape, it also burns vertically through this soil. Long after the surface fire has exhausted the plant fuel, the peat fire continues to smolder under the dirt, moving deeper down and also marching laterally. In their analysis, Scholten and her colleagues found this is most likely to happen following hotter summers, because that makes vegetation drier, thus igniting more catastrophically. “The more severe it burns, the deeper it can burn into that soil,” says VU Amsterdam earth systems scientist Sander Veraverbeke, coauthor on the new paper. “And the deeper it burns, the higher the chances that that fire will hibernate.” Even when autumn rain falls or the surface freezes in the winter, water isn’t able to penetrate the soil enough to entirely extinguish it.

Then spring arrives and the ice retreats. These hot spots can flare up, seeking more vegetation to burn at the edges of the original burn scar. “Basically, right after the snow melts, we already have dry fuel available,” says Scholten.

This is what they think happened in 2008 and in other years with frequent zombie fires. Big blazes burned deeper into the ground, which gave them better odds of surviving the winter. And the researchers think these conditions are becoming increasingly common. “We indeed show that large fire years, associated with hot summers, have become more frequent since 1975, and we expect this trend to continue,” says Veraverbeke. “This would also lead to more frequent occurrences of overwintering fires.”

That’s bad news for the people living nearby, who are not likely to be prepared for a wildfire in the relatively temperate spring. After all, lightning storms—a more expected source of ignition for wildfires—don’t typically arrive until June. “The problem with these fires is that they happen so early in this season that fire management is not really prepared yet, so they’re not fully staffed,” says Scholten.

Zombie fires are also terrible for the planet. When a fire burns through vegetation, it gives off lots of carbon dioxide. But when peat smolders, it produces mostly methane, a far more potent greenhouse gas. When that zombie fire reignites, it starts producing CO2 again. So this one weird phenomenon can produce lots of both kinds of greenhouse gases, which is doubly bad.

This one weird phenomenon can produce lots of both kinds of greenhouse gases, which is doubly bad.

Make that triply bad. When this fire burns through peat, it’s releasing carbon that’s been locked away from the atmosphere for perhaps 10,000 years, where it couldn’t contribute to global heating. It’s ancient carbon that nature cannot quickly sequester again, says Imperial College London engineer Guillermo Rein, who researches zombie fires but wasn’t involved in this new work. “Therefore, every single second of those fires is a net carbon emission. If there are more carbon emissions, that would lead to climate change. And climate change will make these soils drier and hotter, and there would be more fires and bigger fires.”

That will only exacerbate the Arctic’s troubles; it’s warming more than twice as fast as the rest of the planet, and it’s greening—but not in a good way. The retreat of ice and the takeover of shrubs, grasses, and trees means there will soon be more ultra-dry fuel for wildfires to burn. As temperatures rise, peat is drying out more readily, making it easier to ignite with lightning strikes. And as this new research shows, a warmer summer produces more zombie fires that make trouble the following spring. All told, the north is burning like never before.

The new study provides invaluable data for better understanding the gathering zombie-fire army, says Rein. “This paper is a breakthrough, because very few people have been looking into overwintering zombie fires before,” he says. “And that’s not because overwinter fires are not important—quite the opposite.”

By linking these fires to warmer summers, this research gives fire agencies something to monitor: Bigger fires are more likely to overwinter. Firefighters might then use satellite imagery to watch the edges of a burn scar as the snow melts away, then attack the emerging zombie before it gets out of hand. Recent work from Rein has even given them a new weapon: Adding surfactant to water helps it penetrate the soil and put down an underground fire for good. “No one likes peat fires—no human nor nature,” says Rein. “There is no benefit out of them. There’s no controversy about this.”