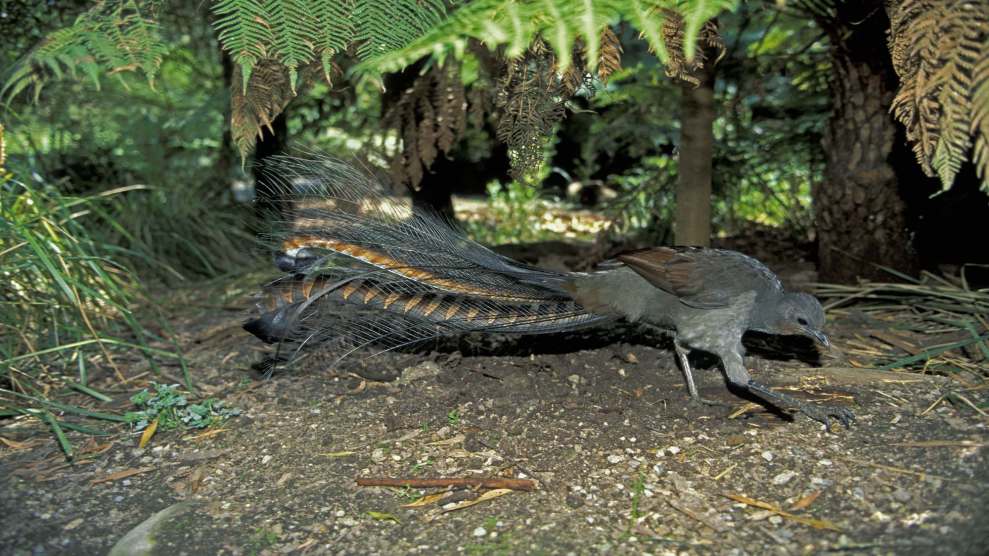 From car horns to jackhammers to chainsaws, the superb lyrebird is famed for its ability to mimic a wide variety of sounds. And now, Echo, the resident lyrebird at Taronga Zoo in Sydney, has been captured mimicking a crying baby, complete with ear-splitting, tonsil rattling, screams.

The seven-year-old male lyrebird’s impersonation might not provide the most tranquil zoo noise parents would hope for.

It isn’t clear how Echo perfected the hair-raising cry, as the zoo is currently closed amid Sydney’s ongoing lockdown.

The unit supervisor of birds at Taronga Zoo, Leanne Golebiowski, said Echo began trying out snippets of the crying a year ago.

Echo has two other new imitations: “One is the sound of a power drill which is scarily accurate—the second is our fire alarm.”

“I can only assume that he picked it up from our guests. Obviously he has been working on his craft during lockdown. But this concerns me, as I thought the zoo was a happy place for families to visit!” Golebiowski said. “There are two other sounds that he makes at the moment which he has newly learned. One is the sound of a power drill which is scarily accurate—the second is our fire alarm. He even has the ‘evacuate now’ announcement down pat.”

Dr Alex Maisey of La Trobe University said wild lyrebirds mimic a wide array of sounds as part of their courtship display. “They must have incredible memory to be able to reproduce so many sounds,” Maisey said.

“They also have their own particular songs that go with dance moves. If you’re a strong male lyrebird who gets lots of food in your territory, then, in theory, you’d be able to put lots of time into practicing [calls] and attract more mates.”

Maisey said it was likely Echo would have had to listen to multiple babies crying in order to perfect his mimicry. Though lyrebirds have been documented mimicking car alarms and chainsaws, Maisey says it is unusual for wild lyrebirds to mimic human sounds. “There’s no doubt some wild populations have human sounds in their repertoire, but it’s generally very rare.”

The birds’ calls are naturally mechanical-sounding, which can be mistaken as being of human origin, Maisey said.

Golebiowski said: “In a zoo setting, because there is such an abundance of sounds that they would hear, it would be hard for these birds not to mimic some of them.”

Male lyrebirds have unique repertoires of sounds to use during the breeding season, she said. “They will practice some calls that are new to see if this will fit well into that repertoire. I’m not too sure what it is about the baby crying that [Echo] finds interesting or fascinating, but I hope it won’t make the final cut.”

In the wild, older male lyrebirds pass on calls to younger generations. In the 1930s, a population of lyrebirds was introduced to Tasmania from Healesville in Victoria.

For generations, the translocated lyrebirds continued to mimic the whip-crack song of eastern whipbirds, which are not present on the island state.

Female lyrebirds are also excellent mimics, but use their calls for different reasons. “We think that they might mimic [many] predatory birds and animals as part of their nest defense,” Maisey said. “They use it with a bit more discretion.”