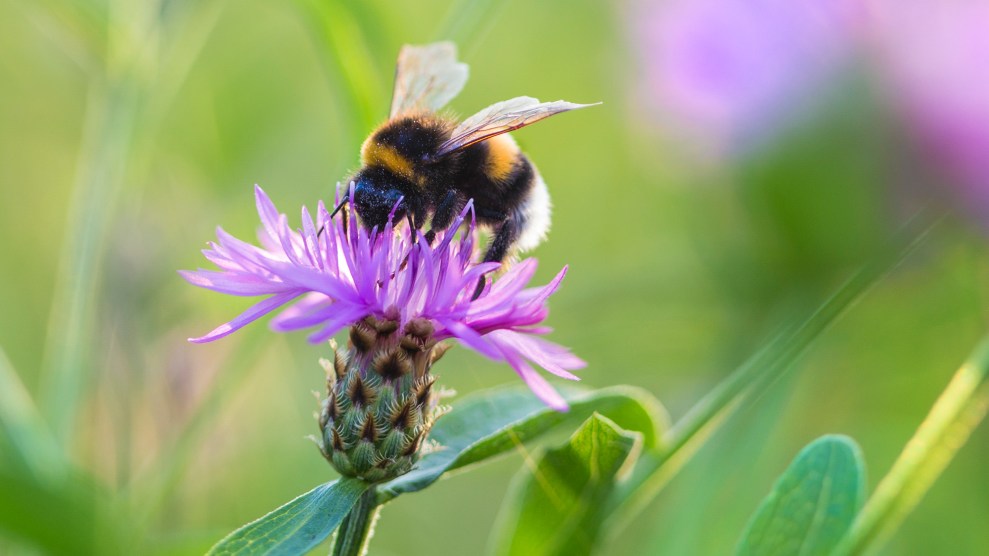 The critical ability of wild bumblebees to keep their colonies at the right temperature is seriously damaged by the weedkiller glyphosate, research has revealed.

Glyphosate is the most widely used pesticide in history, intended to kill only plants. The harm to bumblebees—vital pollinators—was not identified in regulatory risk assessments, which only test whether a pesticide rapidly kills healthy, individual bees. However, the collective failure to regulate colony temperature could have a massive impact on its ability to produce the next generation, the scientists said.

The damage seen in the study occurred when the colonies were running short of food. This is common in farming regions, where wildflowers can be killed directly by glyphosate. The research is the first on wild bees, of which there are 20,000 species, though glyphosate had already been shown to harm honeybees by damaging larvae and the senses of adults.

Standard risk assessments are performed on well-fed, parasite-free bees, not affected by the many stresses they encounter in the real world. The severe decline of many insects reported in recent years has been described by scientists as “frightening” and “tearing apart the tapestry of life.”

“The tests will miss sublethal effects and, in the case of the bumblebees, this directly impacts on whether a colony will reproduce or not,” said Dr Anja Weidenmüller at the University of Konstanz, Germany, who led the study. “In our agricultural landscapes, [food shortage] is a very common stressor that’s more normal than unusual.”

The study, published in the journal Science, examined colonies of buff-tailed bumblebees, one of the most numerous bumblebee species in Europe, and often used to represent wild bees in toxicity studies. These bees can raise their body temperature to incubate the colony’s brood, which uses up as much energy as flying.

Fifteen colonies were divided into two halves by a wire mesh, with one half exposed to glyphosate at levels seen in fields. The exposed bees were able to keep the nest temperature above 28C (82.4F) for 25 percent less time than unexposed bees. “That can have massive effects on colony growth,” said Weidenmüller.

The ideal temperature for the brood to develop is 30-35C. Below 28C development stops and at 25C only 17 percent of the larvae survive. The short flowering season means delayed development is very damaging. “There’s a race to reach the colony size [needed to produce new queens], so if you think of glyphosate imposing a time cost on them, they pay for it heavily,” she said.

Determining how glyphosate causes the damage requires more research, but it is known to harm the microbiome in the guts of honeybees and is likely to do the same in bumblebees. This could mean the bumblebees need to spend more time feeding and less time heating the nest. The pesticide could also damage the bumblebees’ senses, disrupting the complex social interactions needed for a successful colony.

“Bumblebees are a vitally important group of pollinators [and] the new findings are especially important given the widespread global use of glyphosate,” said Prof James Crall, at the University of Wisconsin–Madison, who was not part of the study team. “[Current] environmental safety testing is insufficient for identifying often unpredictable effects on behavior, physiology, or reproduction that occur at sublethal exposures.”

Crall said a possible practical upside of the new study was that it showed providing more food for wild bees could mitigate the damage of glyphosate, highlighting the value of establishing wildflowers and native habitat in agricultural areas.

A chief scientific adviser to the UK government warned in 2017 that the assumption by regulators around the world that it was safe to use pesticides at industrial scales across landscapes was false. The virtual absence of monitoring of their effects in the environment meant it could take years for the impacts to become apparent, said Prof Sir Ian Boyd, now at the University of St Andrews in Scotland.

“Glyphosate has been on the market for over 40 years now,” said Weidenmüller. “It was long declared to be harmless for animals. But more and more studies are showing that is not the case.”

The World Health Organization’s International Agency for Research on Cancer classified glyphosate as a probable human carcinogen in 2015, and billions of dollars have been paid to settle lawsuits. However, an assessment published by the EU’s chemicals agency on Monday concluded that classifying glyphosate as a carcinogen was not justified.

Dolores Romano, at the European Environmental Bureau, said: “This shows the urgent need to address the systemic deficiencies of the process to classify hazardous chemicals in the EU, such as the extremely high level of evidence required, the major gaps of data sources, the dismissal of independent scientific evidence and the lack of a precautionary approach.”