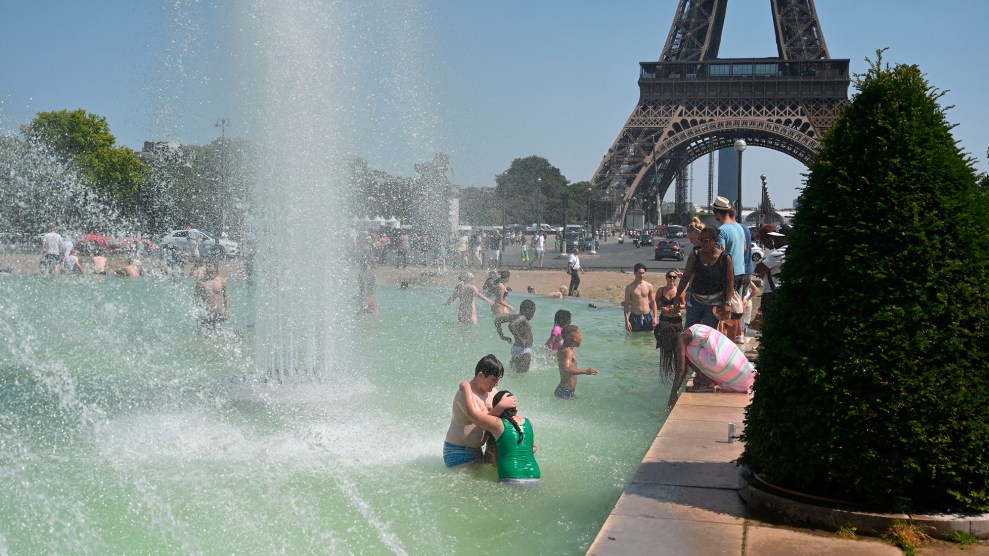 Parisians cool off in the Trocadero fountain near the Eiffel Tower on July 19, a day temperatures in the city hit 104F.Sipa USA via AP

Three in the afternoon, 91 degrees, and the air conditioning is broken at Les Argentiers, the brasserie that Ivan Rizzi runs on a workaday street in Paris’ 12th Arrondissement. Needs a new motor, the repairman says. Rizzi makes note of that, but decides, for now, not to fix it. Never mind that there’s condensation on his patrons’ wine glasses, or that it’s going to be this hot or worse every day this week.

It’s a choice that holds the weird secret of Europe’s reluctance to embrace air conditioning, a blend of culture, climate, architecture, regulation, and foreign policy that leaves some of the richest people on the planet sweating through their clothes for a few weeks each summer.

Rizzi insists he is pro-air conditioning. “We’re heating up the planet, you’ve got to put it everywhere,” he said. Just not here at his restaurant. His antiquated, water-hungry system simply costs too much to bother repairing, he said. Fighting with his neighbors to install a new one that pumps hot air into the street? Fat chance.

Just one in 10 households in Europe has A/C, far below the rates in China, Japan, or the United States, where 90 percent of households have a cooling system. Why have some of the world’s wealthiest countries been so slow to adopt hot-weather climate control? It’s a question that’s top of mind once again as another heat wave bakes Western Europe this week.

Instead of using the moment to embrace A/C, European leaders have mostly shunned the technology or moved to limit its use. In Spain, for example, the government this week began requiring that A/C in public places be set no lower than 80 degrees—following similar measures in Italy and Greece.

If it seems like a counterintuitive response to a heat wave, that’s because Europe is simultaneously in the midst of a huge energy crunch as Russia throttles the continent’s natural gas supplies. With EU member states trying to cut winter gas use by 15 percent this winter to avoid blackouts or industrial shutdowns—and with one eye on Paris Agreement emissions targets by 2030—putting millions of new A/Cs on the grid just isn’t an option right now. Air conditioning makes up just 1 percent of building energy use in Europe, compared to 10 percent in the United States.

Even before Russia attacked Ukraine, EU electricity rates were more than twice the US average, while incomes there are lower.

To make matters worse, the summer is also one of the driest on record. The drought has reduced the output of France’s nuclear plants and is threatening shipping on the Rhine River, which brings fuel and other material to Germany’s industrial heartland. It’s a frightening example of how two different but related climate change events can compound, with each making it harder to respond to the other.

But what explains the longer-term A/C resistance? In a 2021 OpinionWay poll of 1,045 French adults (conducted, it must be said, for a company that makes heat pumps), almost two in three respondents said they did not plan to buy an air conditioner. The top two reasons cited were energy costs and environmental impacts.

When I asked a French friend why her compatriots resist A/C, she explained: “It pollutes, it’s often too cold, the air is fake. It makes you sick, and it gives you a headache. It keeps you inside and it creates nonstop arguments with the team at work. It makes me feel like an old prune.”

Most of that can be called the cultural argument against A/C, and it’s alive and well. Every European who has visited the United States has a story about freezing in an air-conditioned shop or office.

Not everyone buys it. “When the French can’t pay for something, they’ll find 10,000 excuses,” counters Gilles Bourquin, who runs the A/C company his father started in 1967, Clim Denfert. “They have it in the car, they have it in the office,” he notes, and yet, “air conditioning is considered a luxury product.” He means both practically—there’s a 20 percent tax on A/C in France, compared to 5 percent for a new heating system—and in cultural perception, where Bourquin feels A/C has been unfairly vilified by left-wing environmentalists.

There are several reasons A/C adoption, at least on the northern part of the continent, has remained the province of corporate offices, movie theaters, and luxury stores.

First is that this summer’s heat is historically quite rare. Paris, for example, has a summer temperature pattern that’s closer to Seattle than any other American city. Those cool nights—average summer lows of 60 degrees—have made A/C at home seem unnecessary. That is changing as summer temperatures rise. The US Army used to say A/C was “not considered appropriate” for bases in Europe, except in Italy, in part an attempt to live like the locals. But after a blistering summer in 2019, the Army decided to delegate that decision to garrison commanders. Soldiers stationed in family housing in Germany are now permitted to buy their own units.

Second: Electricity is expensive. Well before the war in Ukraine sent the continent into an energy crisis, EU electricity rates were more than twice the US average, while incomes are lower. In 2016, for example, retail electricity prices in Germany were about three times higher than in Texas. That’s in part because the continent is making steep investments in clean power. Ironically, Bourquin suggests, the coming gas crisis might actually help mainstream air conditioning—by encouraging Europeans to replace gas heaters with energy-efficient heat pumps, which can also do A/C in the summer.

Third is the urban heat island effect, which is more severe in Europe’s denser, grayer cities than it is in America’s more suburban metropolises. Even if they rely on clean power, A/Cs heat the air outside as much as they cool the inside. That means the comfort of those with air conditioning feeds the discomfort of those without. Researchers at the French National Center for Weather Research have concluded that if Paris doubles its A/C use by 2030, it could raise outdoor temperatures in the city by 3 to 4 degrees Fahrenheit. As a result, policymakers have been very reluctant to encourage A/C adoption except in vulnerable places like nursing homes.

Fourth is the office-home divide. European workplaces, including some factories, malls, shops, and offices, are more likely to have climate control than homes. Modern office buildings where the windows don’t open, of course, are all air-conditioned. Remote work remains unusual in Europe, and many workers have continued to schlep to the office on some of the hottest days in the continent’s history. That means fewer people sitting in non-air conditioned homes during the hottest parts of the day.

Fifth is vacation. Many Europeans take substantial summer vacations. In France, even the air-conditioning installers are on vacation. Almost three in four Europeans said they planned to travel this summer. Those that remain home take part in the continent’s rich tradition of public space, such as biergartens, café terraces, and public parks. Or adopt a siesta—snoozing through the hottest part of the day.

Sixth is architecture. Europe’s building stock is old. In most EU countries, more than half the residential building stock was constructed before 1970. As a result, very few homes were built with A/C. Renters may not feel like investing in a unit they may not be able to take with them; owners have to pay for a complex, time-consuming installation that can require drilling through concrete, the permission of a co-op board, and even the approval of the local government.

But that legacy is a mixed blessing; many European homes have climate-friendly adaptations built in. Some of these are very simple. It’s rare to see a building in Madrid or Athens that does not have external shutters to keep the summer sun off the windows. The Germans, naturally, have a word for these rolling sunproof gates: rolladen.

Balconies are almost as common, and unlike A/C, they’re not seen as a luxury: the Pritzker-wining architects Lacaton and Vassal added them onto older social housing blocks in Bordeaux. Most apartments also have cross-ventilation, which is made possible by efficient, single-stair floor plans.

These days, new homes in the hotter parts of the continent come with A/C-enabled heat pumps as a matter of course. Still, you can see the focus on architecture before technology on display in the United Kingdom’s new building regulations, which were adopted this summer. In the new code, a cross-ventilated apartment is legally recognized category. There are limits on window surfaces and instructions for overhangs to shade them when the sun is high in the sky. Most interestingly, the code says, builders must show that “all practical passive means of limiting unwanted solar gains—i.e., heat from the afternoon sun—“have been used first before adopting mechanical cooling.” Air conditioning, explicitly, is a tool of last resort.